Yen’s selloff accelerated rather steeply last week, on the back of surging commodity and energy prices. Dollar was also pressured this time, as treasury yields retreated and on late rally in stocks. Euro was not to far away, as pressured by selloff in crosses. On the other hand, commodity currencies ended broadly higher, as led by Kiwi and Aussie. Sterling was also strong as aided by increasing speculations of an early BoE rate hike.

As noted before, US stock indexes are probably ready to resume their long term up trend. Industrial metal like copper could also be staging an upside breakout too. Such developments will continue to exert much downside pressure in Yen, while lifting commodity currencies. Dollar’s upside, however, could be capped as rise in yields loses momentum.

DOW ready to resume long term up trend through 35631 high

The late rally in DOW last week suggests that it has finally overcome the 55 day EMA with some conviction. We’re now viewing price actions from 35091.56 as a three wave consolidation pattern that should have completed at 33613.04, after hitting medium term channel support. That is, long term up trend from 18213.65 (2020 low) is probably ready to resume. 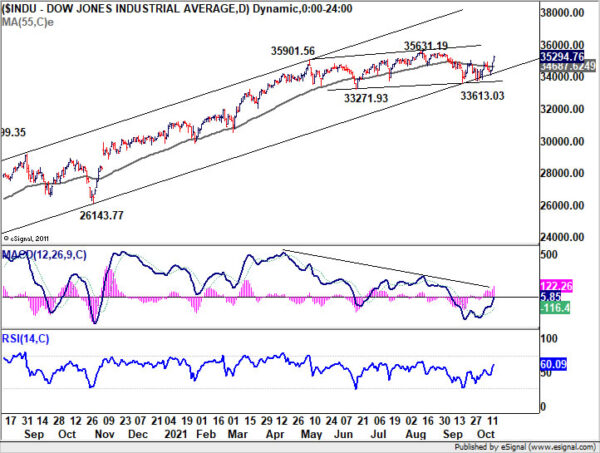 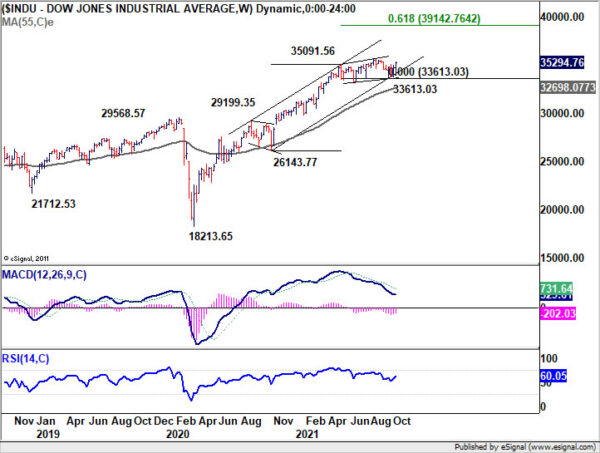 10-year yield still on track to retest 1.765 high, but no sign of breakthrough yet

10-year yield lost momentum after hitting 1.617 the prior week, and turned into consolidation last week. But there is no threat to the near term up trend for now, with 1.463 support intact. Further rise is still expected and break of 1.617 will target 1.765 high. For now, it’s unsure if TNX could surge through 1.765. Or, break of 1.1463 support will extend the corrective pattern from 1.765 with another falling leg. Dollar’s overall strength could be limited if stocks continue to rally but TNX is capped below 1.765. 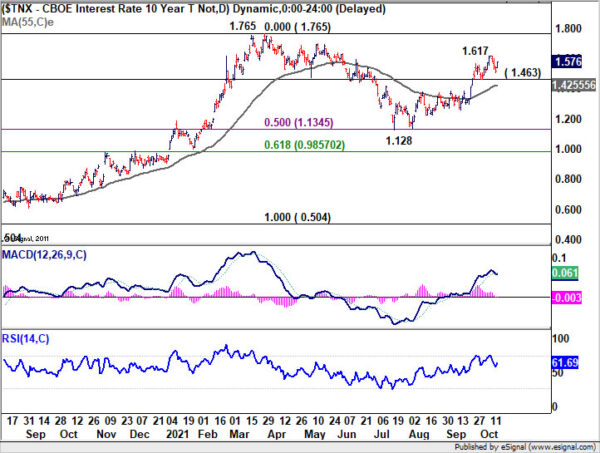 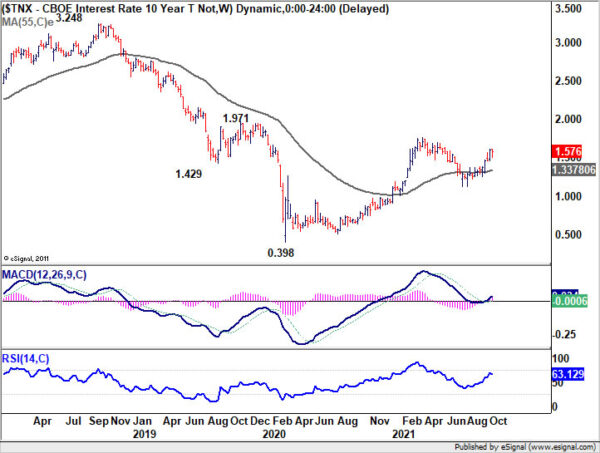 Dollar index edged higher to 94.56 last week, but failed to sustain above 38.2% retracement of 102.99 to 89.20 at 94.46 again. The retreat from there is so far shallow, with help from weakness in Euro and Yen. But bearish divergence condition in daily MACD is raising the chance of a deeper pull back, or even reversal. On the downside, break 55 day EMA (now at 93.21) should confirm short term topping and bring deeper fall towards 91.94 support next. 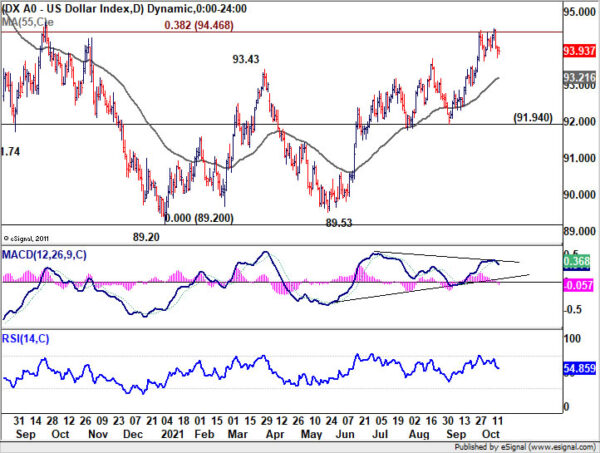 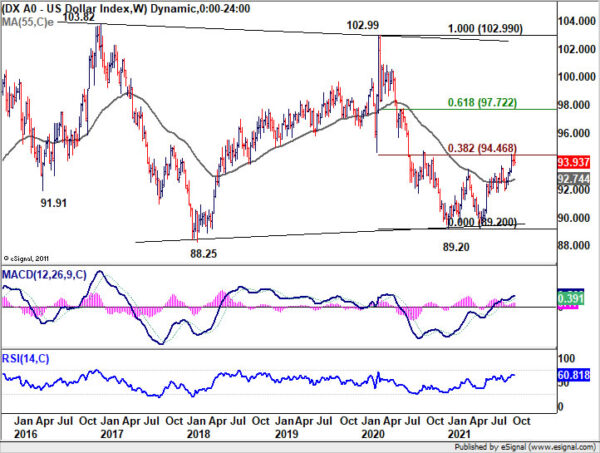 WTI oil extends up trend, copper to break out soon 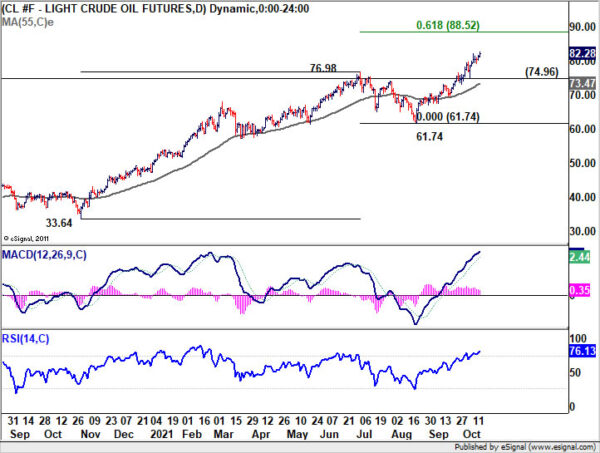 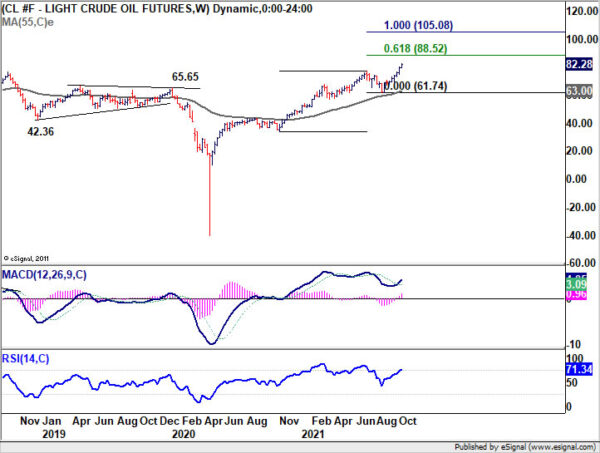 Industrial metals are also catching up. Copper’s strong rally last week argues that the triangle consolidation from 4.888 has completed at 4.010 already, after drawing support from 55 week EMA. Based on current momentum, break of 4.888 high should be see rather soon. In that case, up trend from 1.9725 would resume and target 61.8% projection of 1.9725 to 4.888 from 4.010 at 5.808. Both development in oil and copper are not favorable for keeping inflation under control. 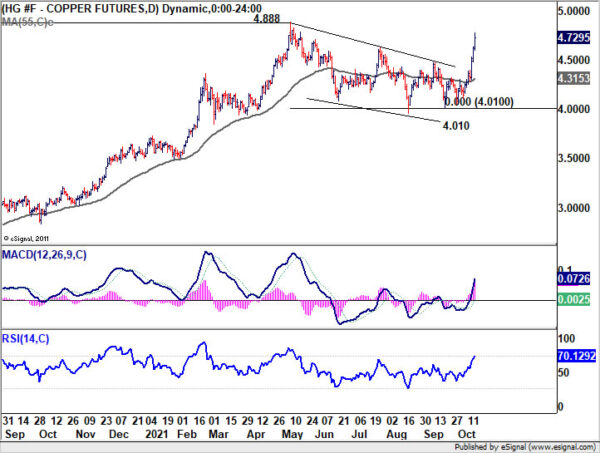 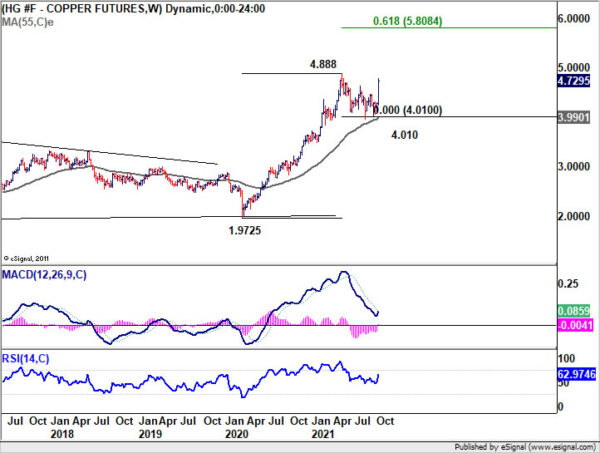 Commodity Yen crosses are clearly the top movers this month, on the back on surging commodity and energy prices, rising global treasury yields, and resistance in investor sentiment. 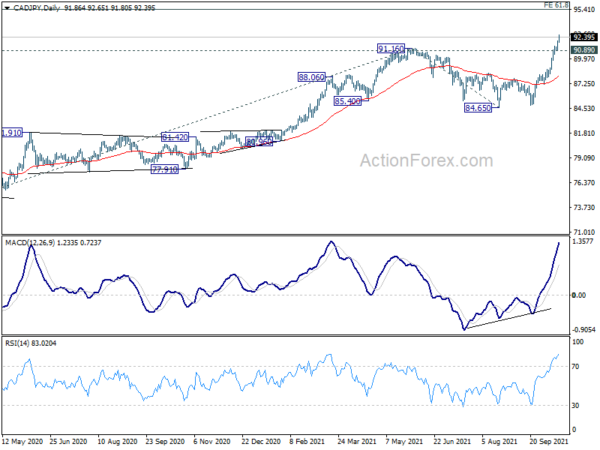 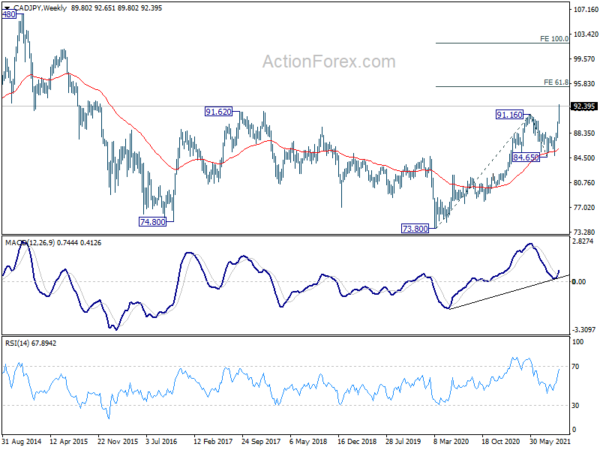 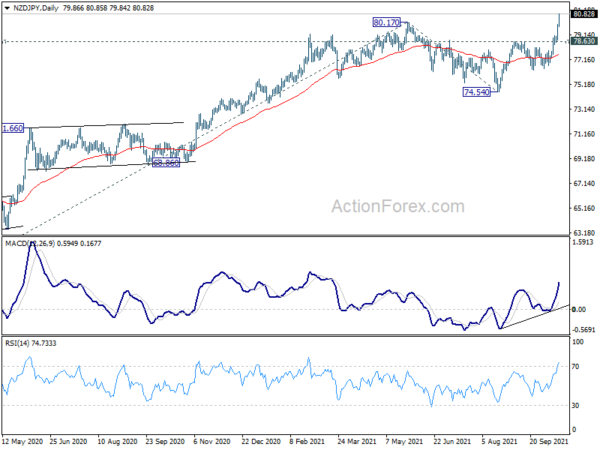 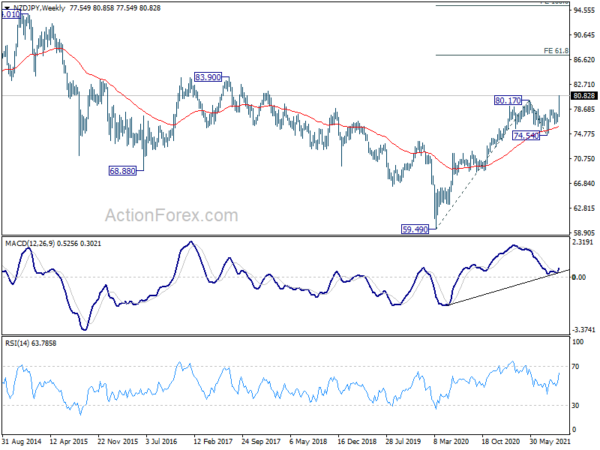 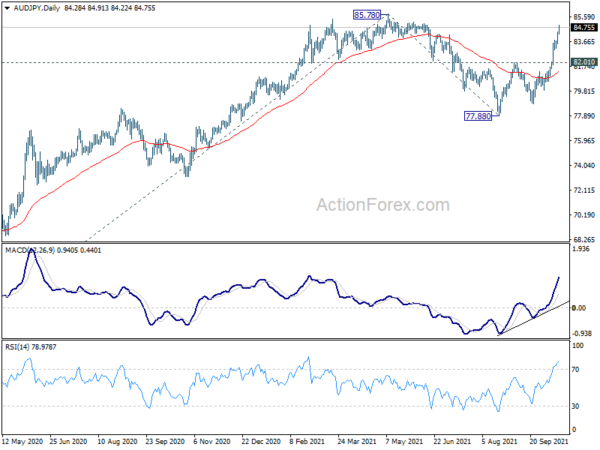 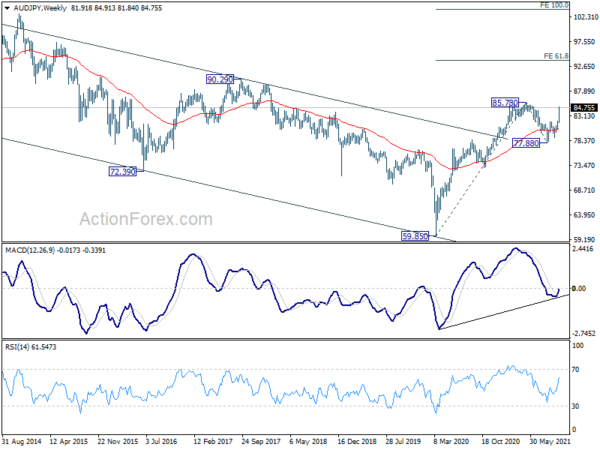 GBP/USD’s rebound from 1.3410 extended higher last week and broad 55 day EMA. Initial bias stays on the upside this week for 1.3912 key structural resistance. Firm break there will indicate that the correction from 1.4248 is complete with three waves down to 1.3410. Further rally would then be seen to retest 1.4248 high. On the downside, however, break of 1.3567 support will turn bias back to the downside for 1.3410 low instead. 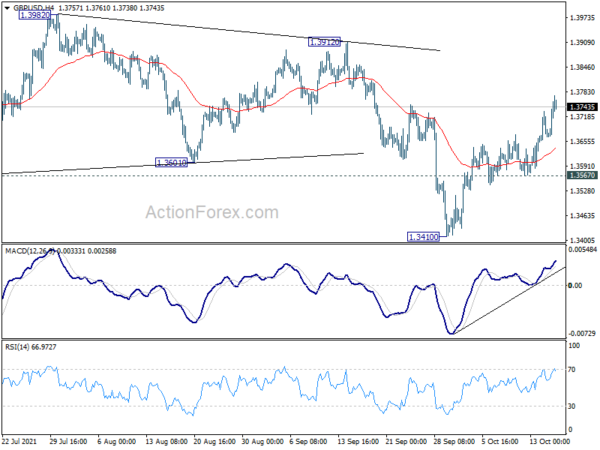 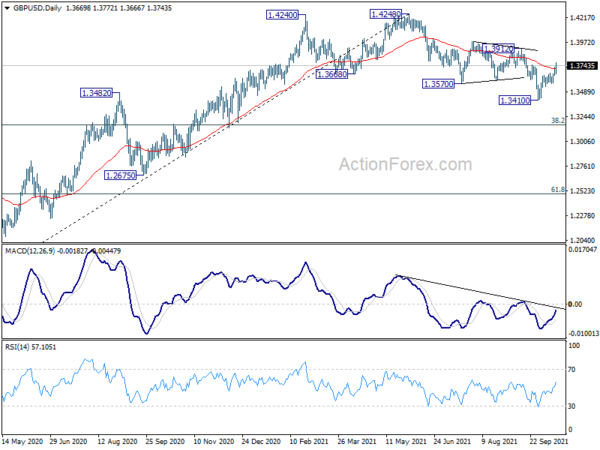 In the longer term picture, a long term bottom should be in place at 1.1409, on bullish convergence condition in monthly MACD. Rise from there would target 38.2% retracement of 2.1161 to 1.1409 at 1.5134. Reaction from there would reveal whether rise from 1.1409 is just a correction, or developing into a long term up trend. 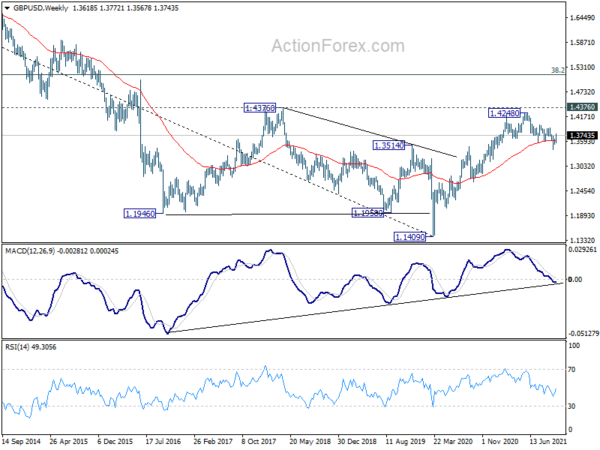 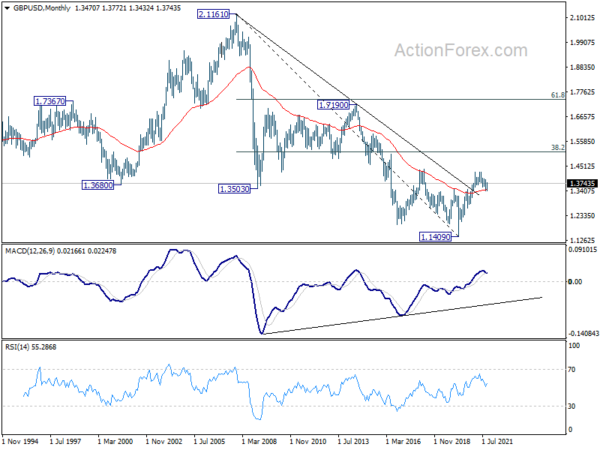