The forex markets were rather mixed last week. Yen ended as the worst performer, but Swiss Franc was the best. Canadian Dollar rose against all but Franc, while Aussie and Kiwi were weak. Euro was mixed together with Sterling wile Dollar was ended lower against all but Yen and Kiwi.

Overall, there were hints of a turnaround in sentiment, as manifested in the late rebound in stocks. Tumbling commodity and energy prices raised hope that inflation is nearing its peak, which is also reflected in pull back in treasury yields. The upcoming developments in the last week of the quarter, and the first of next would reveal more on what next.

S&P 500 bottomed for the near term

After being pressured for most of the week, US stocks staged a strong rebound on Friday. S&P 500 snapped a three-week losing streak and closed the week notably higher. There is also hope that a recession could be avoided in the US with soft landing achieved. Also, a key driving factor was the optimism that the economy could finally be seeing lights out of the inflation tunnel, following the deep decline in commodity prices. Further fall in commodity and energy prices could give sentiments more lifts. 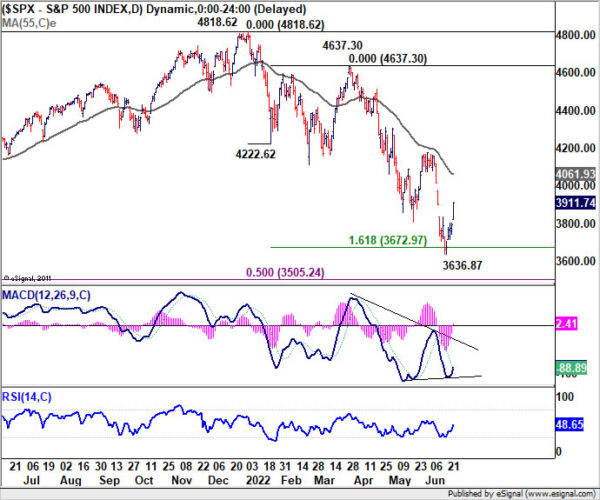 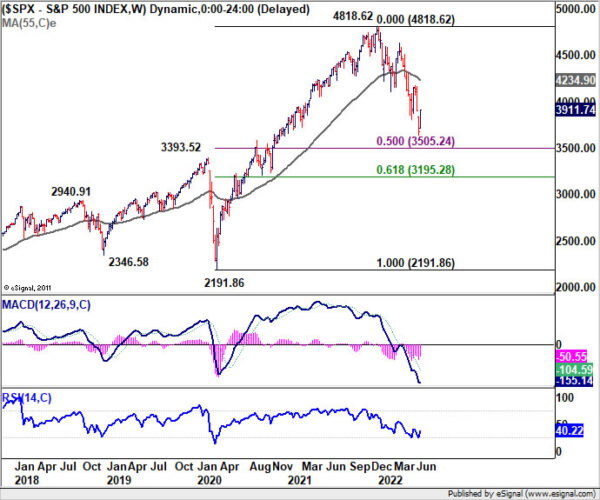 Copper heading back to pre-pandemic level

Copper’s selloff accelerated for another week, and closed at the lowest level in 16 months. 5.0332 high made in March is definitely a medium term top. The fall from there could be attributed to resumption of global supply, as the industry normalized out of the pandemic. On the other hand, there is bearish pressure from deteriorating demand from China.

50% retracement of 2.0400 to 5.0332 at 3.5366 might provide an initial floor. But break of 4.0396 support turned resistance is needed to be the first sign of reversal, or risk will stay on the downside. Copper might to 61.8% retracement at 3.1834 before bottoming. But, anyway, that was still slightly above pre-pandemic range which was below 3. So, it’s not unreasonable. 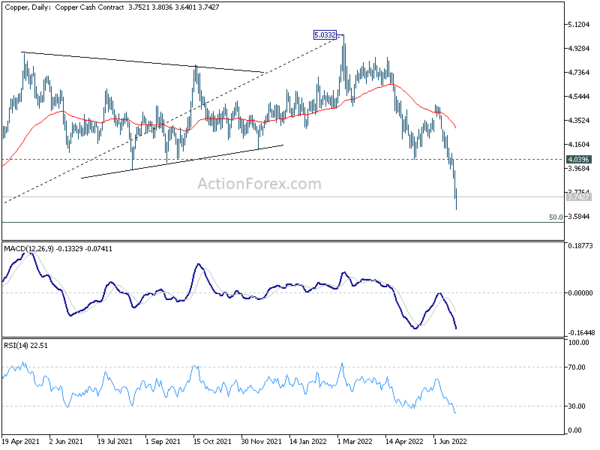 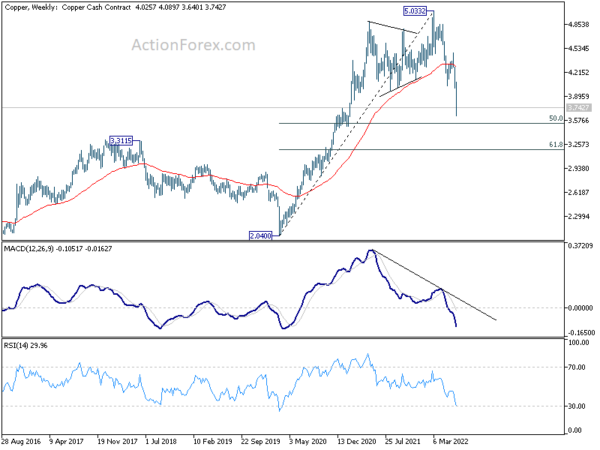 Natural gas also extended the steep decline from 9.588 high, made earlier this month. It has been reversing the rally since Russian invasion of Ukraine, as Germany, the Netherlands and Austria are reverting to coal power, rather than turning to gas. Technically, with the break of 6.427 (2021 high), it could now be correcting the whole up trend that started back at 1.527 in 2020, after the start of the pandemic. Near term outlook will stay bearish as long as 6.953 resistance holds. Next target is 55 week EMA (now at 5.353). 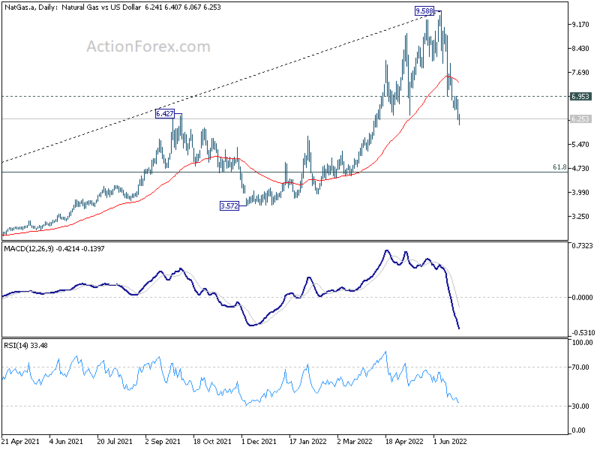 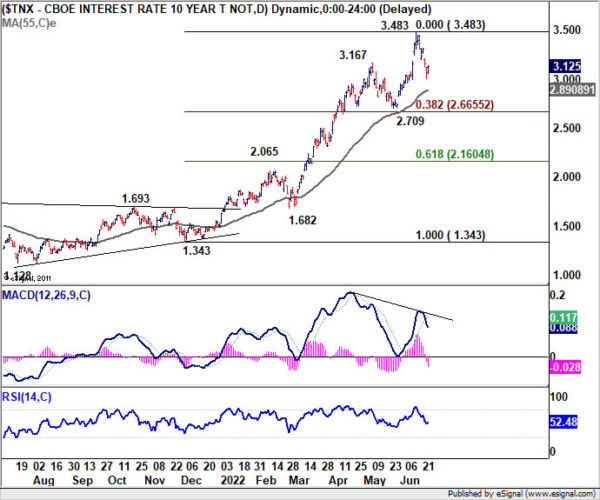 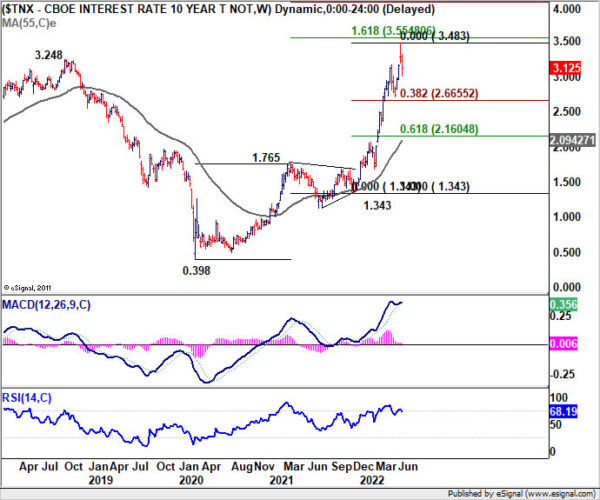 If this bearish scenario really happens, it should be accompanied by stronger rebound in stocks and deeper pull back in yields. 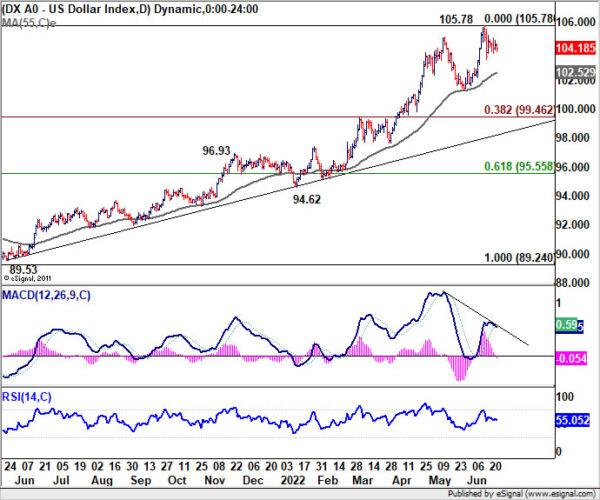 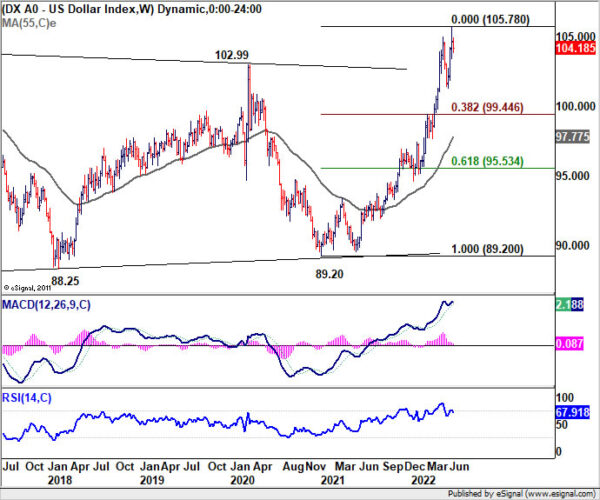 AUD/USD stayed in sideway trading last week. Initial bias remains neutral this week first. downside, firm break of 0.6828 support will resume larger fall from 0.8006. Next target is 0.6756/60 cluster support. On the upside, above 0.7068 minor resistance will bring stronger rebound to 0.7282 resistance first. Firm break there will be a sign of bullish reversal and bring stronger rebound to 0.7666 resistance. 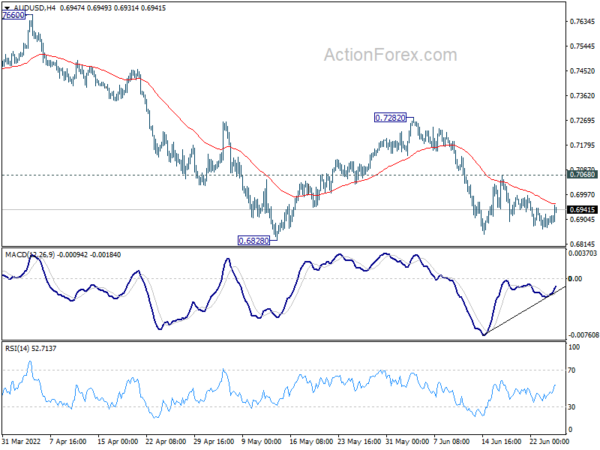 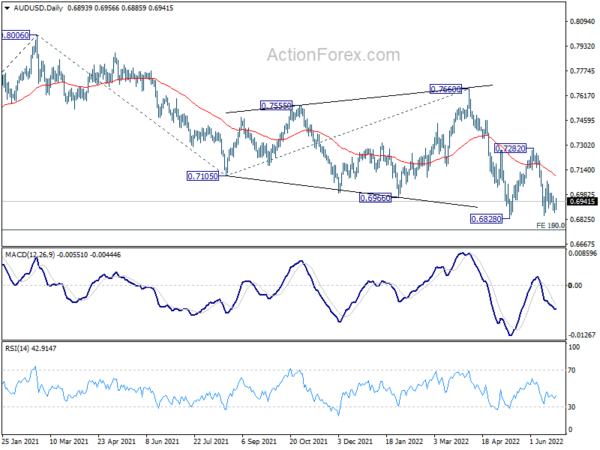 In the longer term picture, focus remains on 0.8135 structural resistance. Decisive break there will argue that rise from 0.5506 is developing into a long term up trend that reverses whole down trend from 1.1079 (2011 high). However, rejection by 0.8135 will keep long term outlook neutral at best. 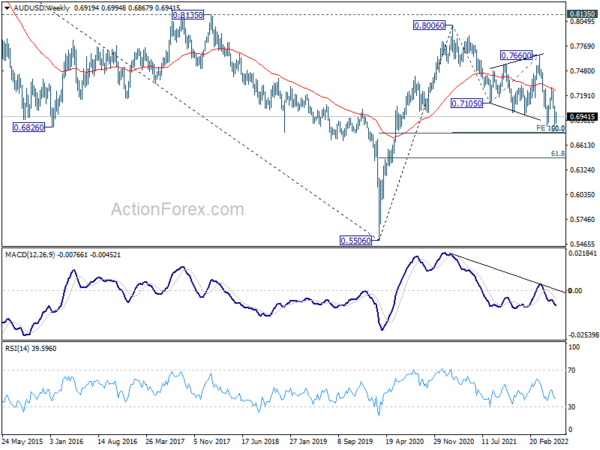 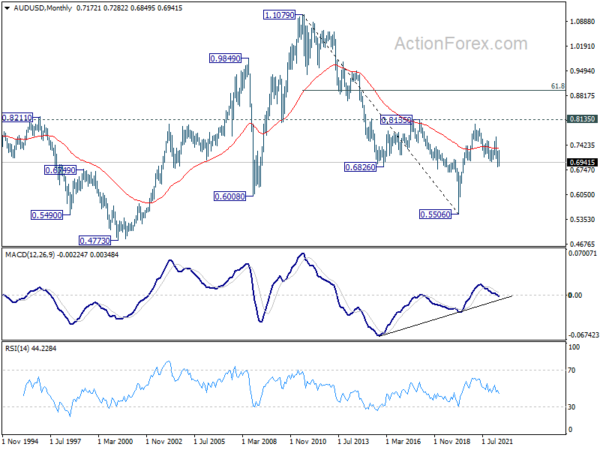