Yen ended as the strongest one last week followed by Swiss Franc. Meanwhile Sterling was the weakest one, followed by Euro, Canadian and then US Dollar. A number of factors were behind such development and they’re all inter-related. The most direct one is decline in major European and US treasury yields. Concerns on the new government of Italy is a main driver to the steep widening of German-Italian yield spread. On the background, the weak batch of Eurozone economic data raised questions on whether ECB would end the asset purchase program this year. Weaker than expected inflation data from UK also lowered the chance of an August BoE hike and sent UK yields lower

In the US, 10 year yield failed to sustain above 3% level and dropped sharply as markets saw some dovish tweak in the FOMC minutes. Indeed, markets have pared back some of the bets on Fed’s tightening path. US President Donald Trump order commerce secretary Wilbur Ross to start a Section 232 national security investigation on auto imports. And he’s considering to impose as much as 25% tariffs on imported cars. That could have a big impact of major car exporters to the US, including Mexico, Canada, Japan and Germany.

Also Trump cancelled his summit with North Korean leader Kim Jong Un after North Korea attacked Vice President Mike Pence. But then Trump said on Saturday that he’s working on reinstating the June 12 Summit. Trade negotiations with China seemed to be heading to the right direction but Trump said he’s “dissatisfied”. Adding to these factors, oil price tumbled sharply as OPEC and Russia could raise production later this year. Falling oil price is for certain not a positive drive in inflation expectations.

Moody’s put Italy’s rating on review, that said it all about new Italian government

The representative of the 5-Star Movement and the League coalition Giuseppe Conte was given a mandate by Italian President Sergio Mattarella to form a government. The direction of the coalition’s fiscal policy is very clear. In the “Contract for the Government of Change” agreement, it’s already said that “the government’s actions will target a programme of public debt reduction not through revenue based on taxes and austerity, policies that have not achieved their goal, but rather through increased GDP by the revival of internal demand.”

Rating agency Moody’s on Friday put Italy’s “Baa2” debt rating on review for a possible downgrade. And the move is quite representative of what the markets think about the coalition. Moody’s said in the statement that “far from offering the prospect of further fiscal consolidation, the ‘contract’ for government signed by the two parties includes potentially costly tax and spending measures, without any clear proposals on how to fund those.” And, the country is facing “significant risk of a material weakening” in its fiscal strength.

Italy 10 year yield jumped -0.23% over the week to close at 2.46% as sell off in Italian bonds extended. , hitting the highest level in four years. 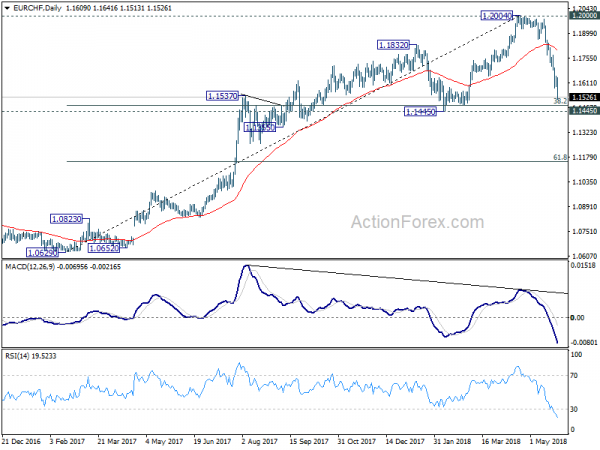 Eurozone data continued to indicate slowdown, but pace might be troughing

Staying in the Eurozone, in the April meeting accounts, ECB offered not nothing new to the markets, but just a little more cautiousness. Despite recent moderation in activity, data remained consistent with “solid and broad-based expansion”. And underlying economic strength added to the Governing Council’s “confidence” that inflation will “gradually” move back to 2% target over medium term. But since underlying inflation remain subdued, without signs of sustained upward trend, “patience, persistence and prudence with regard to monetary policy remained warranted.”

Risks to outlook remain “broadly balanced”. But ECB pointed to “risks related to global factors, including the threat of increased protectionism”. ECB noted that those risks “had become more prominent and warranted monitoring with regard to their implications for the medium-term outlook for growth and prices.

German Ifo business climate rose to 102.2 in May, up from 102.1 and beat expectation of 102.0. Ifo President Clemens Fuest noted in the release that “the declining trend in the Ifo Business Climate has stopped.” And “the current business survey and other indicators point to economic growth of 0.4 percent in the second quarter.” There could be a turn around in the next batch of data.

Chance of BoE August hike got slimmer after mixed data

Headline retail sales was a present surprise as they jumped 1.6% mom in April, much higher than expectation of 0.7%. However, as ONS noted, “the effects of the adverse weather on sales introduces further volatility to the monthly growth rate in April 2018.” And, “combining March and April to compare the two months with the same two months a year earlier provides a more stable picture of the year-on-year growth”. Combining both March and April, sales grew 1.3% in 2018, much lower than 2.9% back in 2017.

Meanwhile, there was some hope for an upward revision in the dismal 0.1% qoq growth in Q1. But it’s left unrevised in the second revision. For now, there is not much chance of an August hike by BoE, even though a November hike is still on the table.

In the US, FOMC minutes are seen as giving some dovish tweaks to the markets. In particular, the minutes emphasized “the aim of keeping inflation near its longer run symmetric objective”, suggesting that a certain degree of inflation overshoot would be tolerable. Meanwhile, the Fed appeared to have confirmed that a June rate hike is in place. Yet, it made no indication on the path after that. Adding to that there were increased talks on the topic of neutral rate. It’s being seen as between 2.50-3.00% by Fed officials. That is, federal funds rate, currently at 1.50-1.75%, could be just 4 hikes away from neutral. 2019 could mark the end of Fed’s tightening cycle.

The FOMC minutes and political developments in the US prompted traders to pare back some of Fed hike expectation. Fed fund futures are now pricing just 90% chance of a June hike to 1.75-2.00%, down from prior week’s 100%.

We’d also like to reiterated that TNX has just touch a key long term resistance zone. 2013 high at 3.036 marks the start of the zone. On the upside, it’s the multi-decade trend line resistance at around 3.20. Sustained break of this resistance zone will confirm reversal of this multi-decade trend, with a double bottom pattern (1.394, 1.336) in the monthly chart. That would mark the end of an era of persistently falling US yields.

Current pull back is not unexpected based on the importance of this resistance zone. From a medium term point of view, we’ll stay bullish in TNX and expect an eventual upside breakout as long as it stays above the flat 55 month EMA (now at 2.267).

Dollar index is pressing an important fibonacci level at 38.2% retracement of 103.82 to 88.25 at 94.19. Upside momentum is seen diminishing in daily MACD. The index is vulnerable to a pull back and break of last week’s low at 93.75 could start a correction back towards 92.24 support. Nonetheless, before that, further rise is still expected. Sustained break of 94.19 will pave the way to 97.87.

Finally, we’d like to have a look at oil price. WTI crude oil lost -4.8% over the week to close at 67.88 level. Talk of OPEC and Russia raising production is a key factor. The total of boost in production from OPEC and non-OPEC countries could add up to as high as 1 million barrels a day. The decision could be made as soon as during the next OPEC meeting on June 22 in Vienna. Meanwhile USD 80 a barrel seems to be a psychological level that the oil producing countries want to avoid.

USD/CAD jumped sharply last week following the sharp fall in crude oil. The support from 55 day EMA affirmed our bullish view that rise from 1.2061 is still in progress for above 1.3124. Canadian dollar will be facing risk of BoC rate decision this week. This is little chance for BoC to hike from the current 1.25%. The Canadian economy is current clouded with a lot of uncertainties. NAFTA negotiation is still dragging on. It’s unsure what comes next when the temporary exemption on US steel tariffs expire on June 1. And, Trump’s push in auto tariffs could also have an impact. Canadian Dollar could be vulnerable to another fall on BoC statement, trade relationship with the US and oil price. 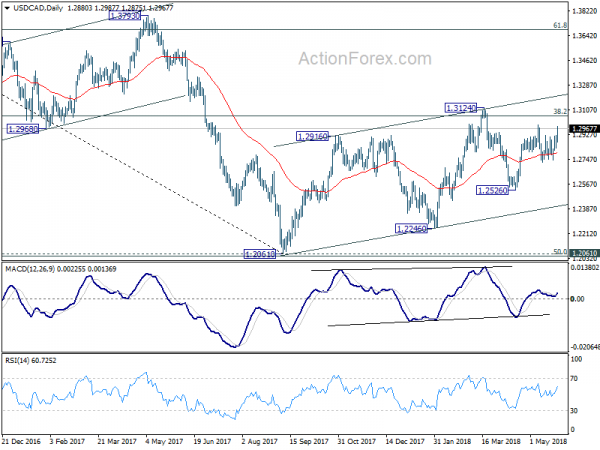 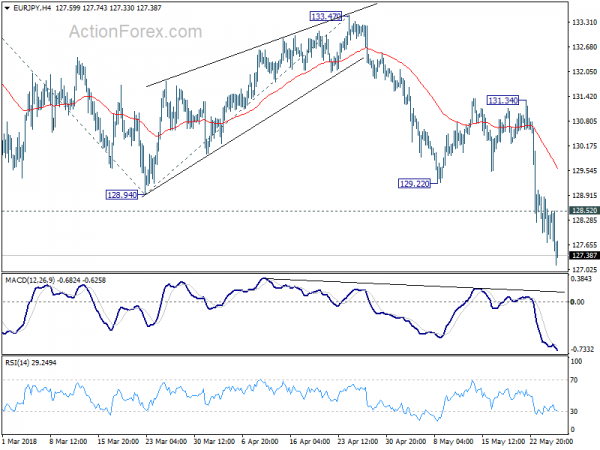 In the bigger picture, bearish divergence in daily MACD and current strong downside momentum is raising the chance of medium term trend reversal. Sustained break of 38.2% retracement of 109.03 to 137.49 at 126.61 will argue that whole up trend from 109.03 has completed at 137.49 already. And, deeper decline would be seen to 61.8% retracement at 119.90 and below. Though, strong support from 126.61 and rebound from there would revive medium term bullish for another high above 137.49. 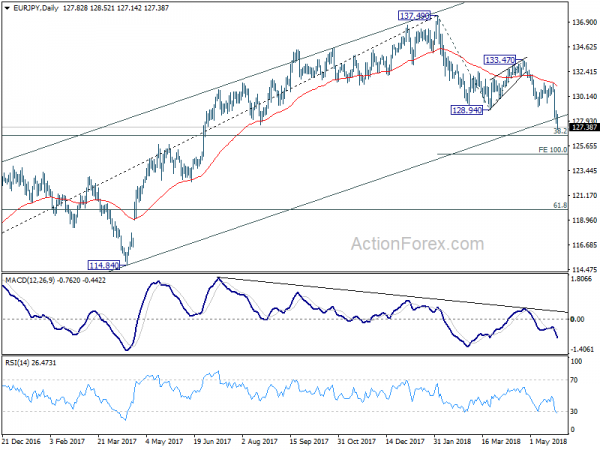 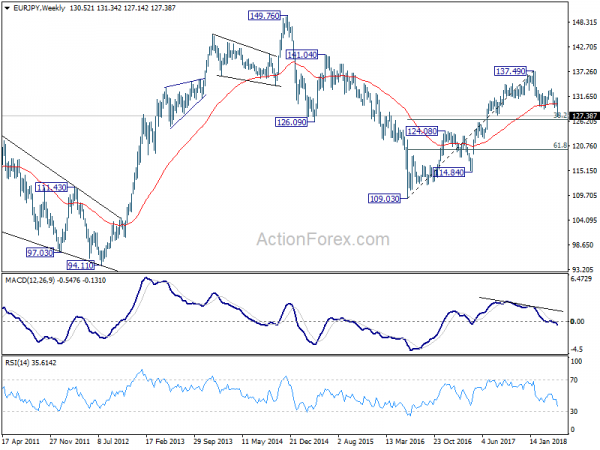 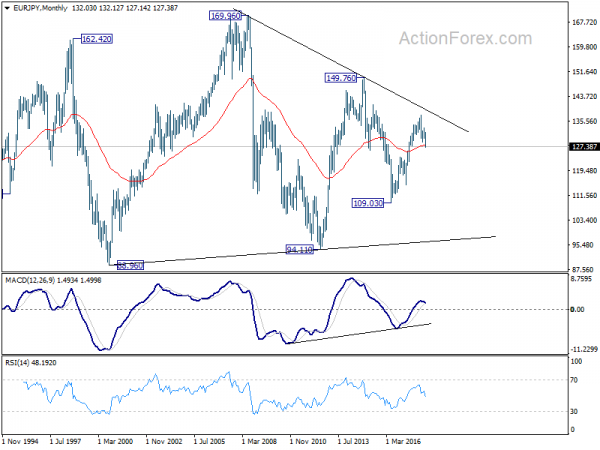