Bets Increased for a Bigger RBNZ Hike in November. Yield Spread Widened to Above 200 bps with Japan

Headline CPI accelerated to +4.9% y/y in 3Q21, compared with consensus of +1.7% and RBNZ’s estimate of +1.4%. The increase marks the strongest in a decade. The increase in price level was broadly based, encompassing tradable and non-tradable items. For the former, petrol prices soared +21.5% y/y. Meanwhile, prices of recreational equipment, furniture, and other recreation equipment and supplied rose +6.7%, +4.7% and +11.6%, respectively. The major driver in the non-tradable category was housing costs which rose +6% y/y, of which rents inflation accelerated to +3.2% while home ownership costs jumped + 12%. Core CPI (ex-food, petrol and energy) accelerated to +4.8% y/y. RBNZ’s preferred gauges of core inflation averaged at +3.85% y/y, above the central bank’s target.

The stronger-than-expected inflation fueled speculations of a bigger rate hike at the upcoming RBNZ meeting. Earlier this month, the RBNZ increased the OCR, by +0.25 bps, to 0.5%. Policymakers signaled that more tightening would be seems in coming months amidst elevated inflation. While a +25bps hike in November is a done deal, the market has now priced in about 50% of a 50 bps increase. New Zealand’s government bond yield curve shifted upward after release of the inflation report. Yield spread between New Zealand and US 10-Year government bond has also widened to 72.7 bps, the largest since 2017. 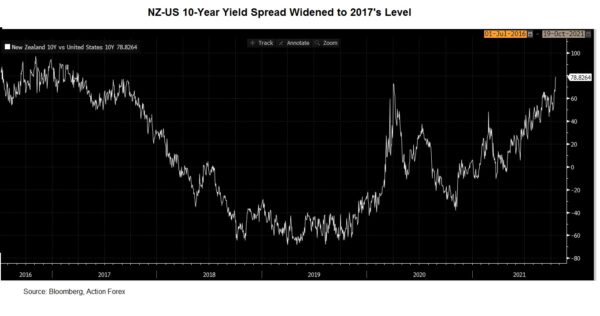 Indeed, NZD’s strength against JPY is more prominent, given the widening policy divergence. While the RBNZ is the first major central bank that has begun the post-pandemic rate hike, there no sign for the BOJ follow suit. Japan’s inflation remained subdued. Headline CPI climbed slightly higher to +0.2% y/y in August, the first positive reading in 13 months. Core-core CPI (similar to core CPI in other major economies) contracted -0.4% y/y, after July’s -0.5%. The BOJ appears the only central bank that has sent no signal about normalization of the ultra-accommodative monetary policy. Undoubtedly, this is a key driver of the recent JPY selloff. The chart below shows that the yield spread between New Zealand and Japan 10-Year government bond has widened to 225 bps. There is more room for NZDJPY strength if the situation persists. 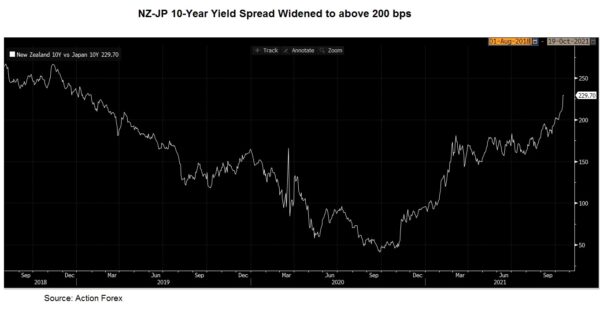