Aussie Dropped as RBA Affirmed that 2022 Rate Hike is Unlikely

RBA Governor Philip Lowe downplayed the likelihood of a rate hike next year at a speech today. Besides reiterating that Australian inflation has been less severe than other economies, he noted that inflation is the the only factor leading to a rate hike. Aussie dropped after his comments. 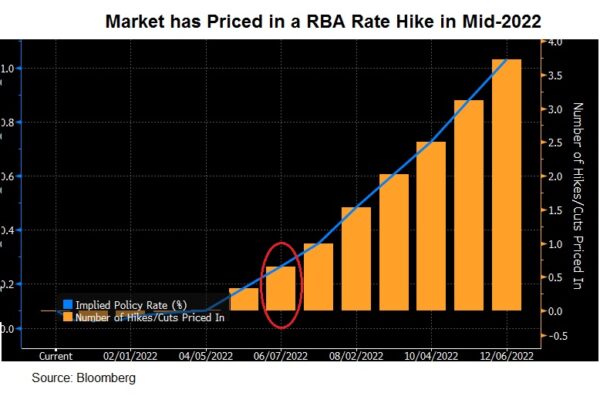 Lowe noted that domestic inflation has been “less pronounced than in many other countries” and “underlying inflation has only just returned to the target range for the first time in six years and is only just above the bottom of that”. He suggested that inflation alone won’t trigger the central bank to tighten earlier. As he noted, “underlying inflation reaches the middle of the target by the end of 2023. If this comes to pass, it would be the first time in nearly seven years that we will be at the mid-point. This, by itself, does not warrant an increase in the cash rate…It is still plausible that the first increase in the cash rate will not be before 2024”. He added, however, that “the trajectory for inflation” could affect the policy “with a slow drift up in underlying inflation having different policy implications to a sharp rise”. 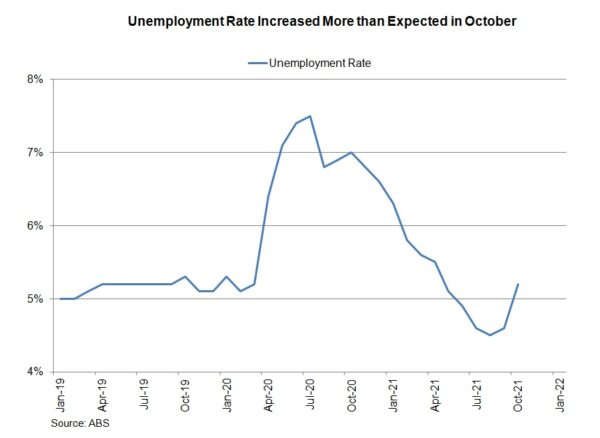 As a further attempt to push back market pricing, he affirmed that “the latest data and forecasts do not warrant an increase in the cash rate in 2022. The economy and inflation would have to turn out very differently from our central scenario for the Board to consider an increase in interest rates next year”.

Indeed, economic data released since the last meeting signaled that the recovery has lost steam. The unemployment rate surprisingly increased +0.6 ppt to 5.2% in October, worse than consensus of 4.8%. The number of employment contracted -46.3K, missing consensus of a +50K addition. The September reading was revised lower to a decline of -141.1K. Both full-time and part-time jobs fell but the majority came from the former. Inflation accelerated further. Retail sales (ex inflation) contracted -4.4% q/q in 3Q21, after gaining +0.8% a quarter ago. This, however, came in better than consensus of -5%. The final reading of Markit’s composite PMI was revised -0.1 point lower to 52.1 in October. This, however, marked the highest reading since June and

Nonetheless, leading indicators signaled that the recovery continued in November. Wespac’s consumer confidence index climbed higher to 105.3 from 104.6 in October. Inflation pressure remained a concern with the market anticipated CPI to accelerate to 4.6% y/y in November, while revising the October reading to the same level (up from +3.6% previously).

The RBA has maintained the stance it made at the November meeting. That is the cash rate will likely stay at at its current level (0.1%) until 2024, while the possibility that an earlier move would not be ruled out.