Volatility in Japanese financial markets is set to intensify as the snap election for the parliament (Lower House), scheduled on October 22, approaches. Our base case is that PM Shinzo Abe’s LDP would remain the biggest party. He would continue to be the leader of the LDP/Komeito coalition in the new term. However, the rapid rise of the new party Kibo no To (Party of Hope), led by Tokyo Governor Yuriko Koike, might result in a decrease in number of seats for LDP. This, together with the decline in Abe’s approval rating, has created much uncertainty in the upcoming election. 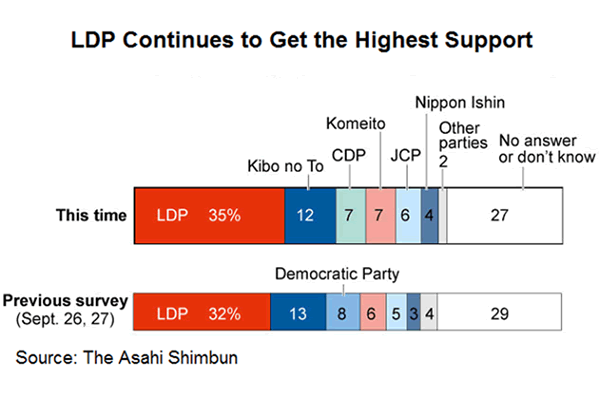 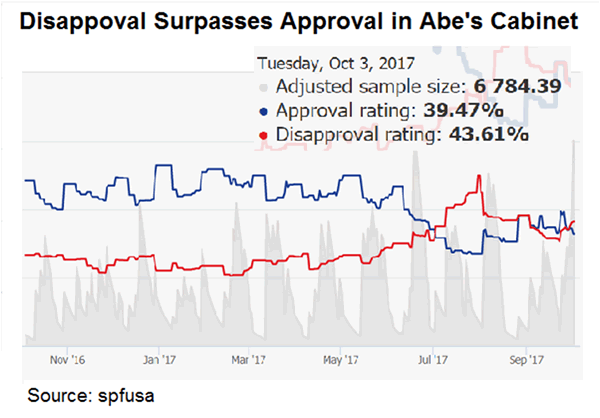 Party of Hope’s draft platform, announced on October 5, focuses on following areas: 1) Constitutional amendment, 2) Phase out of nuclear power, 3) Freeze of the consumption tax increase, 4) Enhancement of national security 5) Reduction of the number of Diet members and their annual allowances, 6) Economic growth through loosened regulations, 7) Education and welfare, 8) Diversity in society, and 9) Decentralization of power.

Constitutional Amendment and Revision of Article 9

As former allies (Koike served as defence minister during Abe’s first term as prime minister), Abe and Koike are both categorized as conservative and populist. They are in support of constitutionals amendment, including the most sensitive issue of the war-renouncing Article 9

LDP in its election pledge unveiled the intention to revise the Constitution in four areas. Among which the most sensitive is clarification of the legal status of the self-defence force (SDF) in Article 9. Acknowledging the controversy of this proposal, Abe announced that his party also proposes to keep the first and second paragraphs* unchanged.

Party of Hope also proposes discussions on revising Article 9, possibly allowing the country to exercise its right to collective self defense when it is required in the actual situation.

*Article 9: 1. Aspiring sincerely to an international peace based on justice and order, the Japanese people forever renounce war as a sovereign right of the nation and the threat or use of force as a means of settling international disputes. 2. In order to accomplish the aim of the preceding paragraph, land, sea and air forces, as well as other war potential, will never be maintained. The right of belligerency of the state will not be recognized.

Indeed, the biggest divisions are on consumption tax and nuclear power. Abe calls for raising the consumption tax rate to 10% from 8% in October 2019. Rather than using the revenue to repay debts, he proposes to allocate the spending on free education and social welfare. Koike, however, proposes to freeze the increase in the consumption tax. She believes a tax hike would suffocate domestic demand growth which has been sluggish. Nuclear power would continue to be key energy source under the leadership of LDP. As indicated in the election pledge, LDP noted that it would restart nuclear power reactors that have confirmed to be safe, after getting consensus from local government. By contrast, Koike’s Party of Hope plans to completely end on nuclear power by 2030 while increasing the share of renewable energy to 30%.

Impact of Monetary and Fiscal Policies

Abe noted that it would be considered as victory if the LDP/Komeito could get the majority of seats. Indeed, opinion polls continue to suggest so despite the dropping approval rate of the prime minister. Note at the current parliament, LDP has secured 287 out of 475 seats. Together with Komeito’s 35 seats, the coalition government has dominated over two-third of the parliament. This is sufficient to propose constitutional change and reapprove bills rejected by the House of Councilors (Upper House). The number of seats in the next parliament is reduced to 465. As such, 233 seats are sufficient for a majority and 310 seats for two-third. We doubt if Abe could retain his grip on power if he ends up losing 89 (287+35-233) seats to barely secure the majority.

Below we consider three possible outcomes and see how they would affect Japan’s monetary and fiscal policy outlooks.

BOJ would maintain the existing accommodative monetary policy. Abe would continue to push his three arrows in the Abenomics. One of which is aggressive monetary easing. Haruhiko Kuroda would also stay as the central bank head as he was handpicked by Abe, thanks to his dovish stance. Consumption tax would increase in 2019 under Abe’s leadership. As he promised, educational and socal welfare spending would rise. Moreover, the second arrow in Abenomics is robust fiscal policy, i.e. the government increases spending to stimulate the economy.

If Abe has to step down, his successor would determine the monetary and fiscal policy stances. The media has identified that Taro Aso, Yoshihide Suga, Fumio Kishida and Shigeru Ishiba as potential candidates. We expect the monetary policy would largely remain accommodative no matter who becomes the new PM. However, the fiscal policy might differ. Aso, Kishida and Ishiba propose fiscal adjustment while Suga advocates bold fiscal policy. Aso, at his capacity as the deputy PM and finance minster, warned last month that the government needs to maintain its efforts to achieve fiscal consolidation on soaring debts. Meanwhile, Ishida indicated that a primary fiscal surplus is a must. Chief Cabinet Secretary Suga believes the current fiscal policy is aimed at boosting economic growth and raising tax revenue.

3. Coalition of Party of Hope and other Smaller Parties

This scenario brings very high uncertainty to Japan’s outlook. Koike has yet to reveal her platform on the monetary policy. Yet, judging from her aim to ‘rest’ Japan, it is possible that she might prefer a less accommodative monetary policy. Indeed, she suggested on September 25 that it is a ‘mistake’ to rely on monetary policy alone. On the fiscal front, she objects a consumption tax hike. The party has yet to announce more details on the fiscal policies.

Abe called the snap election when his popularity was at peak, hoping to have a landslide victory with increase in the number of seats. This wishful thinking is reminiscent of what UK PM Theresa May did in June. However, Conservatives eventually lost the majority in the election, amidst the surging support of the Labor Party. In Japan, support for the LDP remains the highest despite the decline after Abe’s announcement of the snap election. It is also surprising as the Party of Hope has managed to secure over 10% of support, given this party was launched last week. We expect Japanese market volatility would be high as we approach the election day. Investors fear uncertainty. As we witnessed in the elections (France, UK Germany, New Zealand) so far this year, the country’s currency fall if uncertainty increase and investors become more risk-averse. We might see some difference in this time. As a safe-haven currency, Japanese yen rises during time of risk aversion.