Friday June 15: Five things the markets are talking about

This was always going to be a big week for capital markets and it has not disappointed.

The ECB surprised investors Thursday, as its guidance that interest rates will remain at “low levels” for at least another year was more explicit than expected, and stands in stark contrast to the Fed’s determination to push rates higher.

Nevertheless, the most ‘dovish’ of central banks is the Bank of Japan (BoJ), who overnight stuck to its “ultra-easy” monetary policy, bucking the global tightening trend largely because inflation is not getting close to its +2% target.

On the trade front, dealers are bracing for the expected approval of U.S import tariffs on +$50B of Chinese goods – a move that China has said it will respond to in kind. A trade tiff will only be putting additional pressure on China’s economy, which is starting to show signs of cooling.

The U.S dollar hitting a three-week high versus the yen (¥110.88) helped provide support to Japanese stocks overnight. The Nikkei closed Friday +0.5% higher, to finish the week with a gain of +0.7%. The broader Topix rallied +0.3%.

Note: The market had little reaction to the outcome of the BoJ meeting, which kept its short-term interest rate target at -0.1%, as expected, and a pledge to guide 10-year JGB’s yields around zero percent.

Down-under, bank stocks led Aussie shares to a higher finish overnight, supported by G7 rate differentials and the U.S dollar’s resulting strength. The S&P/ASX 200 index gained +1.3% on the day and +0.8% for the week. In S. Korea, stock indexes lagged again with the Kospi setting session lows into the close and finished down -0.8%.

In Hong Kong, stocks posted their biggest weekly drop in three-months as Washington looks set to unveil a tariff list targeting +$50B of Chinese goods, and with Beijing vowing to retaliate, has put investors on edge. The Hang Seng index fell -0.4%, while the China Enterprises Index lost -0.7%. For the week, Hang Seng fell -2.1%, while HSCE dropped -2.4%.

In China, stocks plummeted to a 20-month low overnight on trade tension. The blue-chip CSI300 index fell -0.5%, while the Shanghai Composite Index ended down -0.7% – both indexes were down for the third session in a row.

In Europe, regional bourses opened mixed and have since slipped to the downside waiting on Trump’s China tariff confirmation. 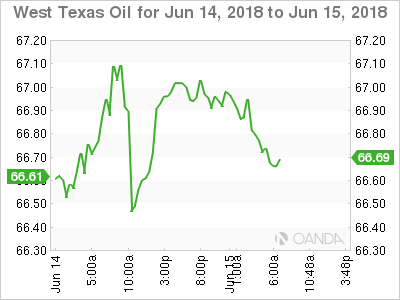 Oil prices are a tad lower heading into the U.S session, as a stronger dollar weighed and a key supply-setting meeting of OPEC looms (June 22).

Both Brent and WTI hit three-year highs last month, but have since drifted lower, indicating investors expect the market to soon become better supplied as U.S crude production rises and as OPEC and its allies look poised to increase output.

Note: With global crude inventories falling, Venezuelan production plummeting and imminent sanctions against Iran, OPEC may soon end their supply cuts as early as next weeks meeting in Vienna (June 22).

Don’t be surprised to see oil prices being pushed about on rhetoric mostly over the next week. 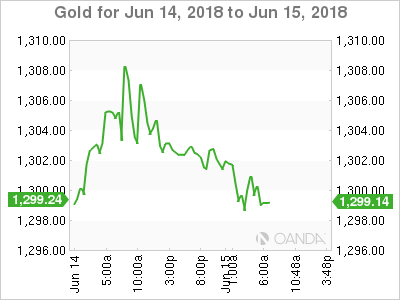 Note: There is no sovereign supply today, but Spain and France are set to announce details of their respective auctions next week. 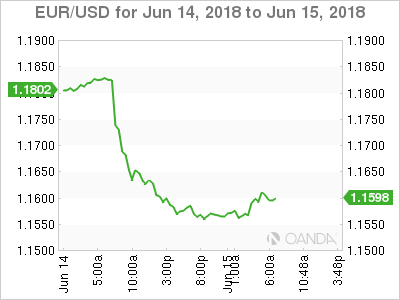 Rate divergence has dominated currency price action over the past 48-hours. A ‘hawkish’ Fed and a ‘dovish’ ECB has provided the dollar bull the fortitude to push the ‘big’ dollar prices to multi-week and month highs across the board. However, traded tensions on multiple fronts are beginning to provide a cap for risk appetite.

The EUR/USD (€1.1600) is rallying into the U.S open after being beaten up from a ‘dovish’ ECB stance yesterday.

Note: ECB policy makers expect the key interest rates to remain at their present levels at least through the summer of 2019 and that QE would still be “subject to incoming data.”

JPY (¥110.53) is reversing some its overnight losses on safe-haven flows that’s being supported by trade tension fears. USD/JPY was approaching the psychological ¥111 handle on rate differentials. 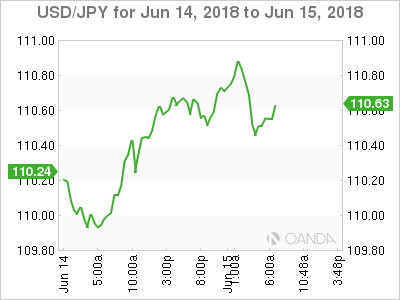 Eurozone data this morning showed wages rose at a faster pace during the three-months through March. Eurostat said pay per hour worked was +1.8% higher than a year earlier, a faster increase than the +1.6% recorded in Q4 of 2017.

Note: Data like this provides further proof that the ECB remains on track to keep inflation at the target.

However, other data also released by Eurostat indicated there has been no strong rebound from a Q1 slowdown in economic growth, as Eurozone’s surplus in its trade in goods with the rest of the world narrowed in April (€18.1B vs. €19.8B). 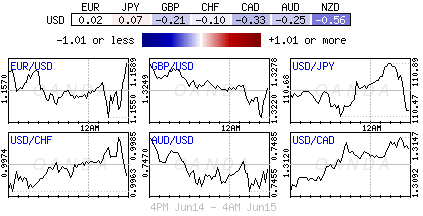