Dollar Stands At 2-Week Highs Ahead Of US Jobs Report

FOREX: The dollar was up on the margin versus a basket of currencies on Friday and at a two-week high after rising considerably on Thursday. The outcome of the US jobs report due later today, as well as any developments on global trade may constitute the next catalysts to steer the currency in either direction.

STOCKS: The Dow Jones finished Thursday’s trading marginally lower, with the S&P 500 and Nasdaq Composite edging higher by 0.5% and 1.2%. Of note yesterday was that Apple reached the $1 trillion valuation milestone, with its shares closing at an all-time high, up 2.9%. In Asian markets, the Japanese Nikkei 225 moved marginally higher and the Topix lost 0.5%. Hong Kong’s Hang Seng was down, though by less than 0.1% after declining notably yesterday. Meanwhile, worries over global trade remain front and center, weighing on equity market sentiment. At 0650 GMT, futures markets were pointing to a higher open for major European indices, with market participants perhaps viewing yesterday’s losses as an opportunity to buy the dip. Contracts on the Dow, S&P and Nasdaq 100 were little changed.

COMMODITIES: WTI posted some gains yesterday after earlier falling to its lowest since June 22 of $66.92 per barrel. The rise came on the back of signs that the drain from a key US supply hub will continue. Today, both WTI and Brent crude were not much changed at $68.89 and $73.36 per barrel respectively. In precious metals, gold was down by 0.1%, trading not far above the near 13-month low of $1,204.91 hit earlier in the day. The dollar-denominated metal is suffering on the back of the greenback’s strength and also looks unable to attract safe-haven flows stemming from trade uncertainty. 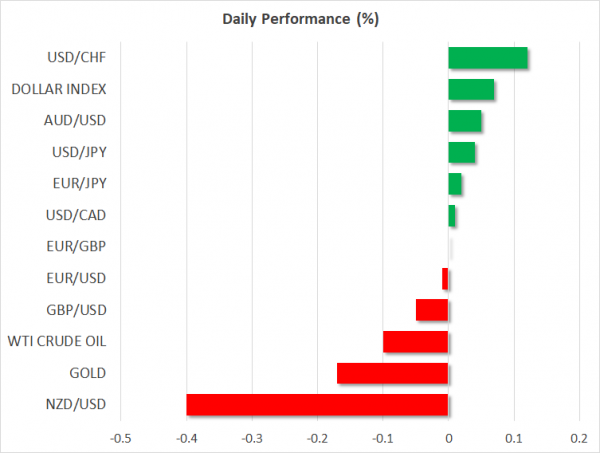 The dollar’s index against a basket of six major currencies was last trading in proximity to its highest since July 20 of 95.231 hit earlier on Friday. The greenback was posting some moderate gains that allowed it to build on yesterday’s strong rise.

China’s offshore yuan recorded its lowest level versus the greenback since May 2017, with USDCNH – up 0.25% – touching 6.8992 and last challenging that peak to extend even higher. Traders are apparently viewing China as having much more to lose from entering into a trade dispute with the US, given that the trade imbalance between the two parties heavily favors the world’s second largest economy. Perhaps, though, markets are not acknowledging that China has other ways of responding to US tariff actions beyond just retaliating with counter tariffs. In the meantime, China yesterday pledged to not stay put if the US went ahead with its threat to further raise tariffs on its exports.

Dollar/yen was up by less than 0.05% at 111.70, with the US and Japan anticipated to hold their first bilateral trade talks in Washington next week. The meetings might be used to forge an alliance of some sorts against China.

The euro and sterling were mostly unchanged against the US currency, trading not far above their two-week low levels posted earlier on Friday of $1.1574 and $1.3000 correspondingly; both lost significant ground against the USD on Thursday. Sterling initially gained yesterday on the unexpected 9-0 vote in favor of a rate increase by Bank of England policymakers, though it later plunged, more than giving up on earlier advances. The pound’s losses were induced by Governor Carney who dampened the rate-normalization outlook and expressed worries about the risks of a cliff-edged Brexit.

Elsewhere, aussie/dollar was up, though not by much, unable to gain from upbeat retail sales figures released earlier on Friday as a deteriorating trade outlook continues to act as a drag on the currency. Kiwi/dollar was down by a notable 0.4%.

Lastly, the Turkish lira recorded a fresh all-time low relative to the dollar as worsening relationships between the US and Turkey over the imprisonment of an American pastor, as well as an ever-poorer economic outlook in Turkey, are hurting the currency. 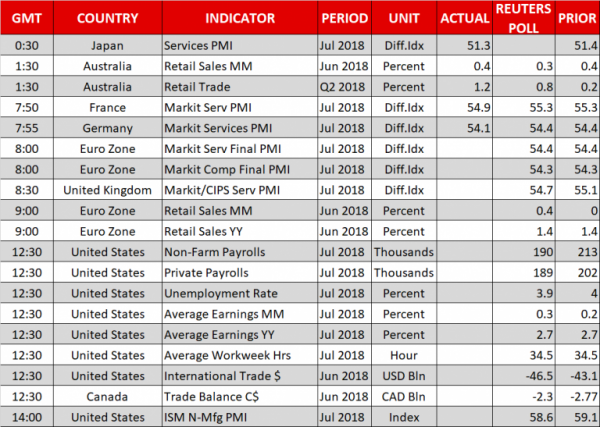 The US nonfarm payrolls report due at 1230 GMT will be the big release of the day, with traders once again eyeing wage growth data which can affect inflationary pressures and thus the Federal Reserve’s rate outlook.

According to economic forecasters, the US economy added 190k positions during July, which compares to June’s 213k; despite the decline this still constitutes a robust number. Meanwhile, the unemployment rate is projected to tick down to 3.9%, after climbing to 4.0% in June. Turning to average earnings, which are again expected to be in the spotlight, they are projected to expand by 0.3% m/m – above June’s 0.2% –, something which would maintain the year-over-year pace of growth at 2.7% for the third straight month.

Firmer wage growth figures as reflected by the reading on average earnings have the capacity to spur price pressures and thus lead to a more aggressive Fed tightening cycle, consequently boosting the greenback. At the moment, Fed funds futures show that market participants have fully priced in an additional 25bps interest rate increase by the US central bank in 2018, while they assign a 63% chance for a second one, which would put the total number of quarter percentage point rate hikes during the year at four. Relatively strong wage growth on Friday can push those odds further up, with the opposite holding true as well.

Staying in the US, June trade stats will be gathering attention at 1230 GMT amid the latest threats from the US to increase its import tariffs on Chinese goods; the relevant deficit is predicted to widen to $46.5 billion, from May’s $43.1bn. In May, rising exports drove the US international trade deficit to the lowest in 19 months, though, the trade gap with China widened further. Another deterioration in June could potentially add fuel to Trump’s protectionist mindset. Meanwhile, Canada is scheduled to deliver its respective trade report at the same time.

Earlier in the eurozone, the economic calendar will be featuring final July PMI and June retail sales figures at 0800 GMT and 0900 GMT respectively, with the latter being of greater importance to the euro. Markit’s composite and services PMIs are expected at 54.3 and 54.4 in July, in line with previous estimates. As regards retail sales, which are somewhat of a proxy for household spending, they’re expected to have expanded at May’s annual pace of 1.4%, while month-on-month, the print is forecast to rise by 0.4% after posting no growth in the previous month.

In the UK, the Markit/CIPS services PMI is due at 0800 GMT; unlike the eurozone, the UK sees only one and final release, which might render the pound more sensitive to the data. Expectations are for the gauge to fall by 0.4 points to 54.7 in July.

In energy markets, the Baker Hughes count of active US oil rigs is due at 1700 GMT.

A meeting between UK PM Theresa May and French President Emmanuel Macron that is expected to touch on Brexit issues is of interest, with any headlines having the potential to prove sterling-sensitive. 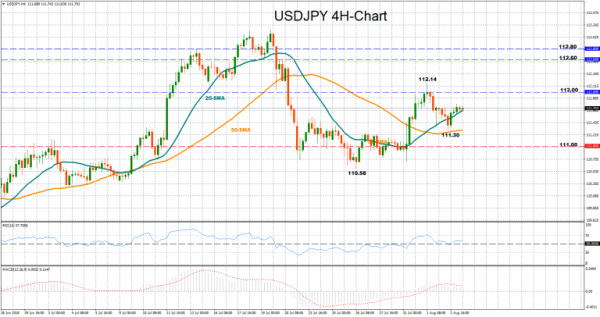 USDJPY managed to rebound after it found support at 111.30 on Thursday, but on Friday the pair paused positive momentum, moving sideways around 111.70. The RSI returned to bullish territory above 50, however it seems to be losing steam at the moment, largely moving sideways. The MACD supports this view as well, moving close to its red signal line.

In case of an upbeat NFP employment report however, the dollar could decisively return to bullish mode, stretching towards the 112 round-level before it tests the August 1 high of 112.14. Steeper increases could also target the area between 112.60 and 112.80 which was somewhat congested earlier in July.

On the other hand, disappointing numbers could pressure the dollar and send the pair down to the recent low of 111.30. If this level fails to hold, bears could try to break below the 111-round level, with scope to reach the 110.58 bottom touched on July 26. Further declines below that area could bring the bearish outlook back into play.