FOREX: The US dollar index, which gauges the greenback’s strength against a basket of six major currencies, eased by 0.26% today, after it came close to the more than 1-year high of 95.652 on Monday. Dollar/yen retreated as well by 0.20%, while euro/dollar picked up speed, trading near 1.1600 (+0.30%). Also, pound/dollar recovered some ground (+0.18%) after falling to an 11-month low overnight on worries about a no-deal UK exit from the European Union. A Bloomberg report stated today that the UK government aims to postpone October’s Brexit deal deadline to November when the G20 meeting will take place and EU leaders will likely need to have a complete Brexit picture before they meet the US president. In the antipodean sphere, aussie/dollar moved higher by 0.62% following the RBA policy meeting today (see below), creating a 1-week high at 0.7437, while kiwi/dollar rose by 0.25%. Dollar/loonie continued the negative movement, dropping by 0.30% to post an almost two-month low. The Turkish lira held near its all-time lows against the US dollar as heightened concern over a diplomatic spat with the US overshadowed the central bank’s attempt to support the currency.

COMMODITIES: Oil prices were in bullish mode as the US activated its renewed sanctions against Iran today. WTI crude oil jumped by 0.61% to $69.43, while Brent rose by 0.89% to $74.41, erasing Monday’s losses. In precious metals, gold moved higher (+0.79%) on the back of a weaker greenback after the rebound from the 17-month low. 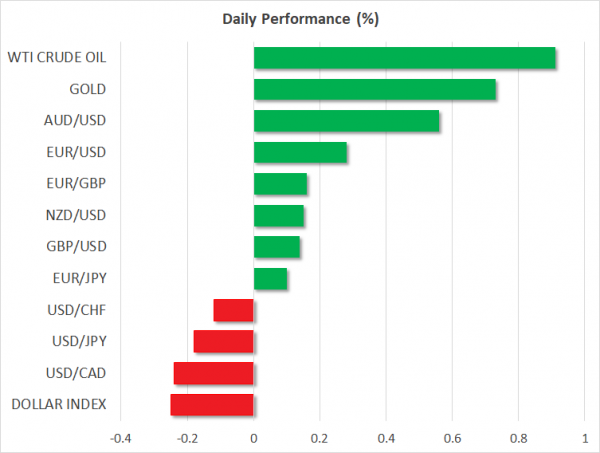 Developments on the trade front will continue to concern investors during the day as the recent war of words between the US and China signaled that tensions are unlikely to ease anytime soon, with Chinese authorities warning on Monday that China could survive its conflict with the US after threatening import tariffs on $60 billion goods imported from the US on Friday. While it is too early to identify the impact of US tariffs on steel and aluminum imposed to China as well as to other US allies such as Japan and the EU, July’s exports and import figures out of China on Wednesday at a tentative time could give some evidence on China’s trade conditions. Particularly, analysts believe that overall Chinese exports have slowed down slightly, growing by 10.0% year-on-year (y/y) compared to 11.2% in June, while imports are projected to have picked up speed, from 14.1% y/y to 16.2%. Hence, the trade balance is expected to come in lower, with the surplus falling by $2.14 billion to $39.33.

Out of the US, JOLTs job openings and consumers credit numbers due later today at 1400 GMT and 1900 GMT respectively could drive the dollar in the absence of any other major data releases.

Meanwhile in Japan, the focus will turn to monetary policy early in the Asian session as the Bank of Japan is scheduled to publish its summary of opinions for its 30-31 July meeting at 2350 GMT. Note that during the latest gathering, the Bank underlined that interest rates would remain low for an “extended period of time” and the trading range on 10-year Japanese government bonds could be more flexible, with investors wondering how long the stimulus program could persist at a time when other central banks such as the Fed have already started the unwinding process. A Reuters report, however, revealed for the first time that plans over raising rates twice this year were discussed. Earlier today, Japan’s Statistics Bureau showed that household spending declined for the fifth month in June on a yearly basis, but by less than expected, and real wages surprisingly hit the highest growth rate in 21 years due to larger bonus increases in the summer.

In Australia monetary policy will remain in the forefront as well, with the Reserve Bank of Australia (RBA) governor, Philip Lowe, giving a speech at 0305 GMT on Wednesday at the Anika Foundation Luncheon in Sydney. Recall that today, the RBA decided – as widely anticipated – to keep rates at a record low of 1.5%, However, it said that “over the next couple of years” the unemployment rate is projected to decline to 5.0% rather than 5.25% seen previously.

In New Zealand, the kiwi could see some fluctuation in the wake of global dairy prices at a tentative time as dairy products hold the largest share of New Zealand’s exports.

In Canada, Ivey PMIs will be available for review at 1400 GMT, with scope to drive the loonie. Still, not much reaction is expected as recent releases brought no significant changes to the currency.

Geopolitical updates could be of interest as well following the activation of US sanctions against Iran at midnight in Washington. Restrictions include the purchase of dollar banknotes by Iran, gold and other metals as well as auto purchases. In the North Korean peninsula, concerns over the denuclearization of the region moved back to the forefront, with the US National Security Adviser, John Bolton, criticizing on Monday North Korea’s efforts to abandon its nuclear program as promised to the US president. 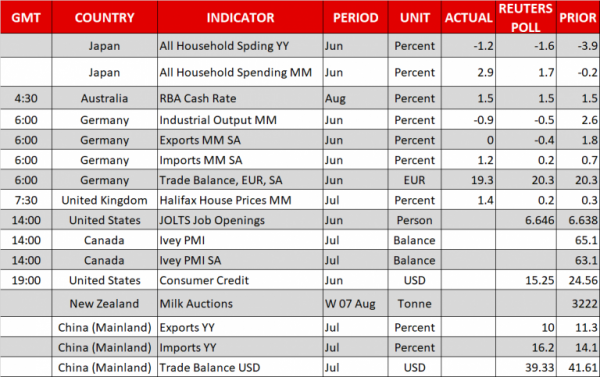 More Pressure For The Aussie On Risk Aversion

Asia Finishes The Week With Sniffles