The US dollar appreciated versus most major pairs on Friday. The Japanese yen outperformed the greenback as a safe haven, but all other major currencies suffered heavy losses during the week. Tense trade developments between China and the US and Friday’s drop in the Turkish lira dragged emerging and developed markets lower as US sanctions were doubled. Geopolitics drowned out most of the impact of economic releases with US inflation hitting a new high and Canadian part time jobs driving a drop in the unemployment rate.

The EUR/USD lost 1.2 percent in the last five days. The single currency is trading at 1.1398, with the pair looking to fall further after breaking through the 1.14 barrier. The economic calendar does not feature major events in Europe and with current geopolitical tension the single currency remains vulnerable against the safe haven dollar. 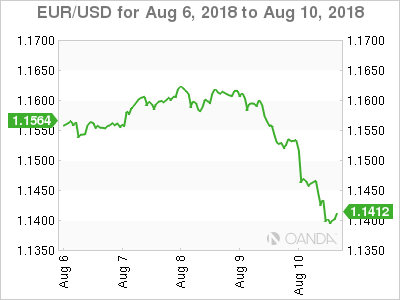 US inflation is 2.94 percent, and with core inflation is back to 2008 levels at 2.4 percent the case for two more rate hikes by the U.S. Federal Reserve this year remains strong. The monetary policy divergence between the European Central Bank (ECB) and the U.S. Federal Reserve has been a factor, but remains in the background as geopolitical forces have proven to have a bigger impact in 2018.

Italian, Spanish and French banks are reported to have loans worth $150 billion in Turkey. The falling Turkish lira will make those loans denominated in foreign currency harder to repay which is why the EUR has touched record lows on Friday. The European stock market has already witnessed a sell off of financial institutions.

Turkey President Erdogan was defiant and called for the population to defend the currency by selling their US dollars and gold holdings instead of trying to open a dialogue with the US regarding steel tariffs.

The USD/CAD gained 0.77 percent during the week. The Canadian dollar is lower on Friday. The USD/CAD is trading at 1.3145. Statistics Canada released a stronger than expected employment report with a huge gain of 54,100 jobs driving the unemployment rate down to 5.8 percent in July. The loonie failed to gain momentum from that economic indicator release given the current geopolitical climate. 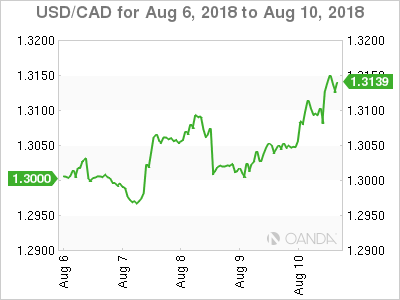 A flight to safety from investors has given a boost to traditional safe havens like the JPY, CHF, USD and gold. The Turkish lira has been in free fall and has triggered contagion fears as Spain, Italy and France have high exposures.

The strong jobs report adds to the probability the Bank of Canada (BoC) will hike the benchmark interest rate one more time in 2018. The BoC raised its overnight target rate to 1.50 percent on July 11 with the growth of the economy picking up for a follow up rate hike in October.

The Canadian currency was lifted by the solid jobs report, but not enough to send the loonie into the black on Friday. The indicator comes during a tense trading environment where risk appetite is subdued.

The GBP/USD lost 1.64 percent in the last five days. The currency pair is trading at 1.2755 near a one year low after no deal Brexit probabilities rose. The divorce negotiations between the UK and the EU have been short on positives with an 8 month period to sort out a lot of tough negotiations. 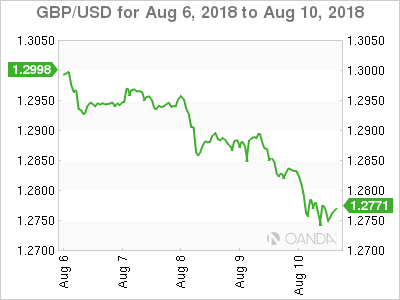 The market has priced in the scenario of the UK exiting the single market with no trade deal in place. The ball is back on the government of Theresa May to come up with a package that not only satisfies supporters at home, but more importantly is acceptable for the EU. So far that balancing act has not been achieved and has put the leadership of Theresa May into question with an almost imminent vote of confidence in the near term.

The decision of the Bank of England (BoE) to lift rates last week was unanimous, but it could end up being the only pro-active decision by the central bank in 2018 as it heads into reactive territory.

Yen Keeps Up With Dollar in Turbulent Times

The USD/JPY lost 0.51 percent during the last five trading sessions. The currency pair is trading at 110.59. The Japanese currency has appreciated but it has done so less than other times of uncertainty in the market. The use of economic sanctions by the Trump administration was a recurring theme this week causing high volatility in emerging markets. 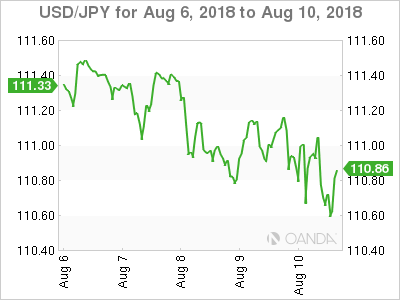 The JPY continues to trade in a tight range despite the global uncertainty but the safe haven appeal of the currency has set it apart from other Asian currencies that have depreciated as trade war concerns rise.