FOREX: The dollar was 0.2% down against six major currencies on Friday. Fed chief Powell’s speech at the Jackson Hole summit later today may act as the short-term driver determining positioning on the greenback.

STOCKS: The Dow Jones, S&P 500 and Nasdaq Composite finished Thursday’s trading in the red, specifically losing 0.3%, 0.2% and 0.1% respectively. Trade angst could had contributed to the fall, though it could also be argued that there was no clear catalyst spurring the losses which either way were modest in nature. In Asian markets, the Japanese Nikkei 225 and Topix indices added 0.85% and 0.65% correspondingly. Hong Kong’s Hang Seng was 0.3% down. At 0656 GMT, futures markets were pointing to a mixed open for major European benchmarks. Contracts on the Dow, S&P and Nasdaq 100 were trading slightly higher.

COMMODITIES: WTI was 0.7% up at $68.32 per barrel and is looking set to record its first weekly gain after seven straight weekly declines, as a drop in US crude stocks, a strike in North Sea fields and upcoming US sanctions on Iran are suggesting tighter supplies of the precious liquid. Brent crude was 0.6% higher at $75.17/barrel. In precious metals, dollar-denominated gold was 0.35% up, at $1,189.12/ounce, again moving in opposite direction to the US currency. 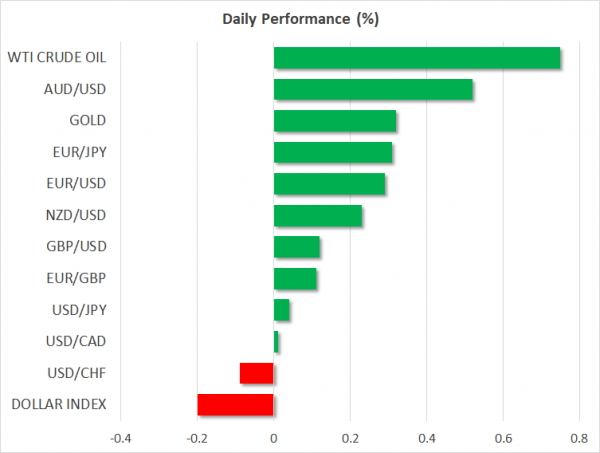 The dollar’s index, which gauges the greenback versus a basket of currencies, edged down after rising on Thursday to put an end to a six-day losing streak, its longest since February. The Jackson Hole summit of central bankers and Powell’s speech at the event, especially in the aftermath of President Trump’s Fed criticism will be closely watched.

The US-China trade negotiations appear to have produced no breakthrough, with the two nations also proceeding with a new round of tariffs on one another yesterday, a move that was clearly telegraphed before. Despite this, China said the talks were constructive and honest; the yuan is on the rise against the US currency today, paring some of yesterday’s losses.

Dollar/yen was slightly higher, adding to hefty advances from the three previous days and trading not far below a near three-week high of 111.48 touched earlier in the day. Japanese inflation figures released during the Asian session showed core CPI growth remaining steady at 0.8% y/y in July, undershooting expectations for a rise to 0.9%; the Bank of Japan’s target for inflation stands at 2%.

Euro/dollar was up by 0.3%, recovering on a significant portion of yesterday’s losses, while pound/dollar, despite also trading higher, was for the most part consolidating Thursday’s decline. The British currency is coming under pressure as the government is stepping up its plans for a no-deal Brexit and warning of the consequences of such an outcome. Euro/pound was adding to gains from previous days, trading close to a 10-month peak of 0.9027 reached earlier on Friday.

The Aussie, a stark underperformer on Thursday, losing 1.4% versus the USD, was the lead gainer out of major currencies on Friday, trading up by around 0.5%, after Treasurer Scott Morrison replaced Malcolm Turnbull as prime minister. Still, aussie/dollar continues to trade below the 0.73 handle which was violated on the way down yesterday. Kiwi/dollar was also higher; New Zealand data released earlier showed a narrower monthly trade deficit in July than analysts projected.

On Friday, all eyes will turn to the Jackson Hole summit hosting some of the world’s most influential central bankers. Specifically, a speech by Fed chief Jerome Powell at 1400 GMT will attract the most interest as investors will be looking for insights on how confident the Fed is regarding its rate hike outlook at a time of growing trade uncertainties and criticism by President Trump.

On trade, deliberations between the US and China so far do not appear to have produced any “tangible” outcome, though updates on the issue, as well as the prospect of US tariffs targeting $200 billion of Chinese products, will definitely be closely watched.

In terms of data releases, of most importance will be US durable goods orders giving an indication on business spending in Q3 due at 1230 GMT. Analysts forecast that orders for long-lasting manufactured goods including transportation have declined by 0.5% m/m in July after rising by 0.8% in June, while the core measure of durable goods that excludes transportation items is expected to grow by 0.5% m/m, faster than June’s 0.2%. Excluding defense items, the gauge is projected to slow down from 1.3% m/m to 0.8%.

In energy markets, Baker Hughes data on active US oil rigs are due at 1700 GMT. 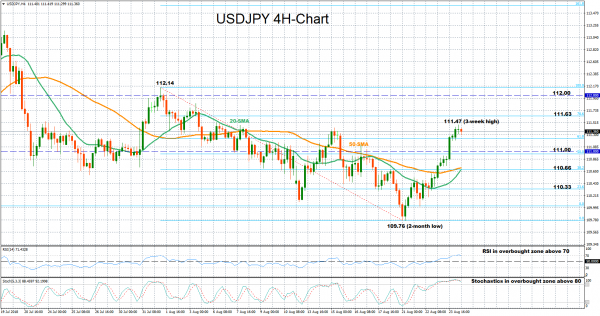 USDJPY successfully broke the 111 round level on Thursday, stretching towards a three-week high of 111.47 on Friday. The RSI, though, signals that the rally could be overdone, and downside corrections may emerge in the short-term as the indicator is currently moving in overbought levels above 70. Additionally, the bearish cross in the stochastics with the %K line moving below the slow %D one –both lines are above 80 – is a negative signal in the very short-term.

Should the pair extend downwards, the price could meet support around the 111 figure, which is slightly above the 50% Fibonacci of the downleg from 112.14 to 109.76, given of course that the 61.8% Fibonacci mark at around 111.30 is violated first. Even lower, bears could face a wall around the 38.2% Fibonacci of 110.66 where the 20- and the 50-period moving averages are currently roughly located, perhaps giving some additional importance to the area, before the eyes turn to the 23.6% Fibonacci of 110.33.

On the flip side, if bullish actions dominate, the price could overcome Thursday’s top of 111.47, with scope to test the 78.6% Fibonacci of 111.63. Any step higher could then strengthen positive momentum towards the 112.00 handle, with the August 1 peak lying not far above at 112.14.