Tuesday September 11: Five things the markets are talking about

Today, thus far, is a good feel-day as market sentiment seems to be improving, supported by renewed optimism that the U.K can cut a Brexit deal in a timely fashion. This has pushed sterling (£1.3067) to a five-week high overnight.

However, be forewarned, emerging markets and recent commodity price weakness provides enough reasons for caution. This market is still waiting for the “other shoe to drop” in the Sino-U.S trade dispute after President Trump signalled late last week that he is ready to impose tariffs on even more goods.

This Thursday, the European Central Bank (ECB) is expected to deliver caution regarding concerns about protectionism and turmoil in EM at its monetary policy meeting. Draghi is likely to continue stressing that the eurozone’s economic recovery remains “robust” and that policy makers are confident of a recovery in inflation, which will keep its monetary ‘normalization’ intact.

Dollar ‘bulls’ will be looking to strong data due later in the week for support – U.S core-CPI release on Thursday and retail sales on Friday are likely to come in strong and boost the buck.

In commodities, WTI crude speculators are looking to Hurricane Florence approaching the U.S east cost – will there be much disruption in supplies? Crude ‘bulls’ are pushing WTI prices towards $68 bp.

European stocks and U.S equity futures are a tad lower after a mixed session in Asia.

In Japan, equities had their best session in a month overnight, with exporters lifted by the yen weaker outright (¥111.48) and tech stocks boosted by gains stateside yesterday. The Nikkei ended the day +1.3% higher, while the broader Topix closed +0.67% stronger.

Down-under, Aussie shares rallied overnight, ending its eight consecutive days of losses, supported by financials and energy stocks. The S&P/ASX 200 index rose +0.6% at the close. In S. Korea, the Kospi weakened, tracking losses from China as Sino-U.S tariff worries continue to linger. At the close, the index lost -0.24%.

In Europe, regional bourses trade lower across the board as the downtrend continues tracking U.S futures lower. 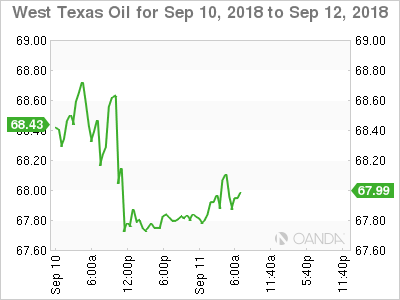 Note: It’s not in the U.S’s best interest to push up oil prices – it could depress economic activity or even triggers a slowdown in global growth.

Note: Russia, the U.S and Saudi Arabia are the world’s three biggest oil producers, delivering around a third of the world’s almost +100M bpd of daily crude consumption.

Note: Before the year-end, OPEC and allies are to discuss cooperation post-2018 in Algeria. OPEC has the tools to use “quotas” if the market requires it. However, OPEC believes cooperation can continue without output quotas in 2019.

Note: After last week’s strong U.S payrolls, fixed income dealers are pricing in another Fed rate hike for September – it would be the third hike in 2018, with expectations of one rise more in December. 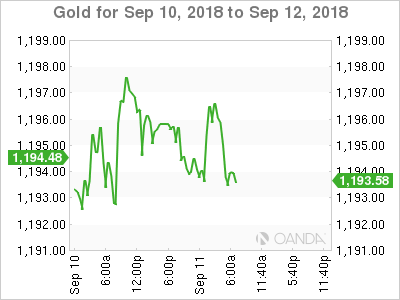 German 10-year Bund yields have backed up to their highest level in five-weeks overnight, as growing hopes of fiscal restraint in Italy and a Brexit deal being completed in the coming weeks.

Italy’s BTP yields fell for a seventh consecutive session, with long-dated yields hitting their lowest level since late July. Comments from Italian politicians this month that E.U fiscal rules would be respected in next year’s budget have supported the markets demand for Italian debt. 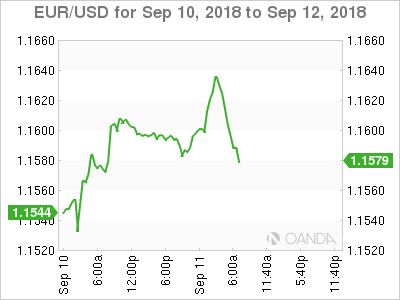 4. Dollar falls, but is looking to regain momentum

The EUR has found support as easing concerns about Italian debt boosted the single currency for a second day, while broader moves in forex markets remain contained until there is further clarity in the Sino-U.S. trade dispute.

GBP (£1.3040) gets another Brexit boost. Market headlines appear more positive as the E.U seems more willing to compromise to achieve an agreement with the U.K. Also, domestic wage data beat expectations (see below) and justified the recent BoE rate hike.

The TRY ($6.4783) is little changed as investors wait for the Central Bank of the Republic of Turkey (CBRT) rate decision on Thursday. Current consensus is looking for the CB to hike 1-week repo auction rate by +325 bps to +21.00%. 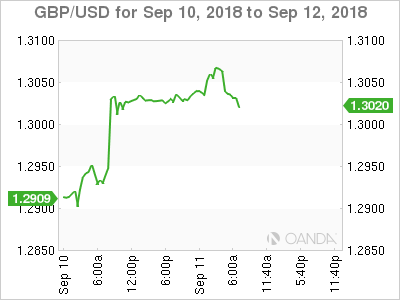 U.K data this morning provided the pound with some support. Stronger-than-expected U.K jobs data, pushed EUR/GBP briefly to a five-week low of €0.8887.

Other data showed that the U.K unemployment rate stayed flat at +4% in July vs. expectations of a +4.1% rise.

The Bank of England (BoE) meets Thursday and further proof of rising U.K wage growth may concern Governor Carney and company, however, ongoing Brexit uncertainty is expected to weaken any chances of another rate rise any time soon. 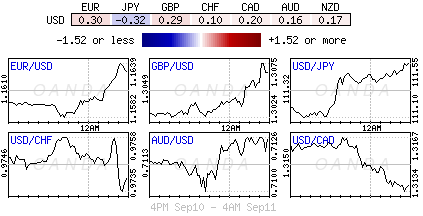