Friday September 21: Five things the markets are talking about

Aside from trade, tariff and retaliation, central banks are upping the ante to “normalize” interest rates.

This week, Norway’s Norges Bank has joined the BoE, and the central banks of the Czech Republic and Romania in withdrawing some of its stimulus, while Sweden’s Riksbank has indicated that it may raise its key rate before the end of the year. The ECB plans to end QE this December, while next week the Fed is expected to hike +25 bps (Sep 26) – the market will be looking for any comments on the impact of escalating trade tensions.

Earlier this week the BoJ kept its stimulus policy unchanged, however, the move overnight to cut the purchases of super long-bonds would suggest that the period of easy-money era is ending. In Hong Kong, the HKD has surged the most in 15-years in part due to the prospect for higher interest rates there.

There are a number of EM hotspots that the market is also focusing on, in particular – Turkey & South Africa. The lack of details on how Turkey can achieve a soft landing for an economy that topped the G20 growth charts in 2017/18 continues to contribute to a volatile TRY, but a plan is forthcoming.

While in South Africa this morning, President Ramaphosa announced details of a stimulus package to take immediate effect to battle the country’s technical recession.

With trade war concerns receding in the background, the U.S dollar is on track to close out the week trading atop of its seven-month lows against G10 currency pairs as stronger equity markets and rising bond yields encourage investors to purchase riskier assets.

Note: Expect today’s session to be volatile as its quadruple witching – futures and options on indexes and individual stocks expire.

In Japan, equities rallied to an eight-month high, with noted gains in insurance, energy, and shipping stocks. The Nikkei did fade late, but still gained +0.8%. Financials were helped by the BoJ’s offer to buy less super-long bonds. The broader Topix gained +0.9% to hit a four-month high.

Down-under, the Aussie stock market again underperformed in the region overnight. The S&P/ASX 200 finished up +0.4%. The index ticked up +0.5% for the week, a second consecutive modest gain. Providing intraday pressure were utilities, which lost -0.5% last night, but consumer staples rallied that much while materials jumped a further +1.5% and IT climbed +2.2%. In S. Korea, the Kospi closed +0.68% higher on Friday as investors risk appetite recovered. For the week, the benchmark index climbed +0.9%.

In China, stocks surged overnight before a long holiday weekend, with investor sentiment boosted by hopes that a government effort to boost domestic demand could help offset effects of an escalating trade war. At the close, the blue-chip CSI300 index rallied +3.0%, its biggest one-day gain in four-months. The Shanghai Composite Index gained +2.5%, closing out its best week in six months.

In Europe, regional bourses continue to rise despite sluggish PMI results. In the U.K, the FTSE is supported by positive Brexit comments, while in Italy; bourses are supported by budget talks. 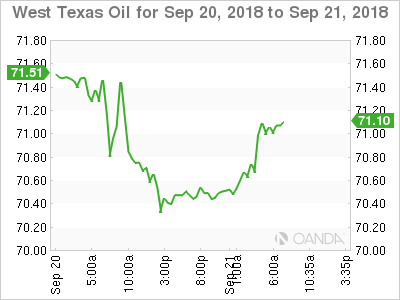 Oil prices are a tad higher this morning after falling in yesterday’s session as U.S President Donald Trump urged OPEC to lower crude prices at its meeting in Algeria this weekend (Sep 23).

Note: OPEC and its allies are scheduled to meet on Sunday to discuss how to allocate supply increases to offset a shortage of Iran supplies due to U.S sanctions.

Trump took to twitter and called on OPEC to lower prices, saying, “they would not be safe for very long without us, and yet they continue to push for higher and higher oil prices”.

Trump’s veiled threats are unlikely to force OPEC and its allies to agree to an official increase in crude output on Sunday. 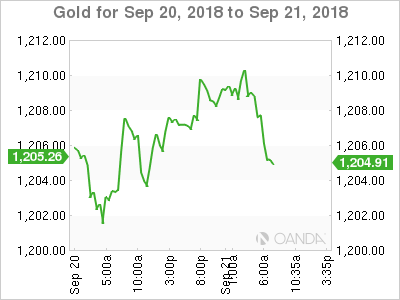 Italian bond yields are under some pressure this morning as the market awaits clarity on the 2019 budget and after the 5-Star Movement denied a report that Deputy PM Di Maio had threatened to pull his party out of the government.

An ISTAT report shows that the budget deficit as a proportion of national output was slightly higher last year than previously estimated, but that debt was lower also helped to push down yields.

Italian BTP yields are down -5 bps along the curve, having jumped by up to +12 bps yesterday. Elsewhere, Germany’s 10-year Bund yield has eased to +0.47% as some Euro investors returned to safe-haven assets.

Note: Bunds backed up to a four-month high of +0.506% Wednesday, but have struggled to maintain this level, rallying back down after renewed Brexit concerns and the infighting in the Italian government.

Stateside, the yield on 10-year Treasuries has jumped + 2 bps to +3.08%, the highest in more than four-months. 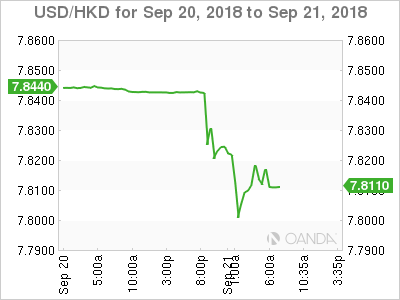 Expectations of a rise in bank lending rates and tightness in cash supplies caused a sharp spike in HKD overnight, pulling it off the weak end of its narrow trading band it had been stuck in for the six-months.

The HKD rallied to $7.8244, hitting its highest levels since late February. Since March, it had stayed near $7.85, the lower end of the Hong Kong Monetary Authority’s (HKMA) managed trading band.

USD/INR rose to an intraday high of $72.47 before fading after a sharp spike lower in Indian Indices on liquidity concerns of Indian Housing name Dewan Housing.

ZAR (+0.46% to $14.2629) found support after S. African President Ramaphosa announced a number of policy reform plans this morning, including re-prioritising +$3.5B of public spending to boost economic growth and create jobs. 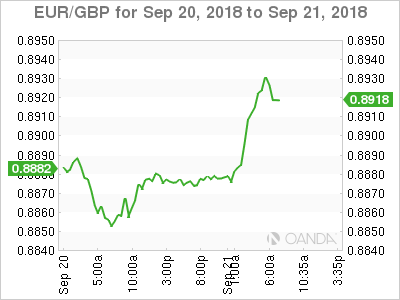 Data this morning showed that Euro zone business growth eased this month although optimism picked up a tad from last month’s two-year low.

Nevertheless, growth remained robust and firms were able to increase prices, which should keep the ECB happy.

Digging deeper, there remains a divergence between services and manufacturing – the dominant service industry beat forecasts for no change in the pace of growth from last month. IHS Markit’s Euro Zone Services Flash Purchasing Managers’ Index (PMI) rose to 54.7 from 54.4.

Manufacturers however failed to live up to expectations. The factory PMI slumped to a two-year low of 53.3 from 54.6 – the market was looking for 54.4.

Divergence raises the question, how long can you maintain a strong service sector growth without an upbeat manufacturing sector? 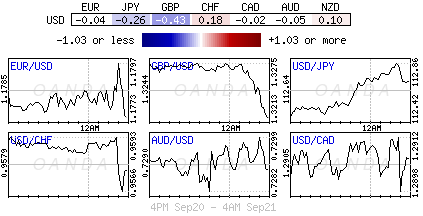