Monday October 22: Five things the markets are talking about

The ‘mighty’ U.S dollar has eased a tad along with treasuries, while Italian bonds have rallied.

The EUR had found some early support on the back of a ratings decision by Moody’s Investors Service late last Friday who removed the immediate threat of a downgrade to ‘junk.’ The market now awaits on S&P’s review this Friday.

On tap for this week, the Bank of Canada (BoC) is expected to increase its policy rate by +25 bps to +1.75% on Wednesday (Oct 24) despite last Friday’s disappointing inflation and retail sales readings.

Elsewhere, the European Central Bank (ECB) is expected to leave policy unchanged, but questions regarding Italy and its budget issues are expected to be front and center.

1. Stocks in the black

Japan’s Nikkei edged higher, supported by a rally in Chinese stocks on the promise of additional stimulus measures, triggering buying in firms exposed to China. The Nikkei share average rallied +0.37%, moving off a six-week low hit during last Friday’s session. The index is now down around -7.5% since hitting a 27-year high on Oct. 2. The broader Topix edged +0.15% higher.

In China, stocks surged overnight in the wake of coordinated statements of support by senior regulators, and as China prepares to overhaul its income tax law for individuals. The benchmark Shanghai Composite index was +4.2% higher, while the blue-chip CSI300 index jumped +4.4%.

The gains extended to Hong Kong, where the Hang Seng index added +2.3% and the China Enterprises Index ended +2.6% higher.

In Europe, indices trade higher across the board. Italy’s FTSE MIB outperforms after Moody’s cut the countries rating to the lowest investment grade, but put the outlook as stable, helping BTP futures rally. 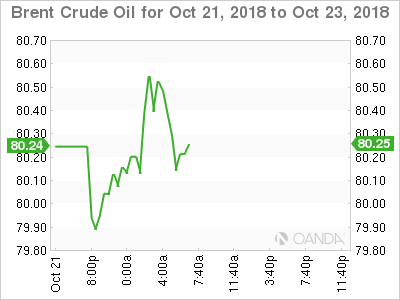 2. Brent oil back above $80 as Iran sanctions loom

Note: The U.S sanctions on Iran, the third-largest producer in OPEC, are set to start on Nov. 4.

OPEC agreed in June to boost supply to make up for the expected shortfall in Iranian exports, however, recent data suggests that OPEC is struggling to add barrels as an increase in Saudi supply was offset by declines elsewhere.

Nevertheless, relief may come from the U.S, where offshore drillers added four oilrigs in the week to Oct. 19, bringing the total count to 873, according to Baker Hughes data on Friday. After months of stagnation, U.S crude production is expected to rise.

However, undermining sentiment is weaker China growth data and the ongoing Sino-U.S trade dispute. The full impact of the trade war is expected to hit markets early next year and provide a considerable drag on oil demand.

Ahead of the U.S open, gold prices have edged higher overnight towards their three-month peak hit last week, as the ‘big’ dollar eased and worries over rising political tensions slowing global economic growth lent support to the ‘yellow’ metal. Spot gold is up +0.1% at +$1,226.52 an ounce, while U.S. gold futures are also up +0.1% at +$1,229.50 an ounce. 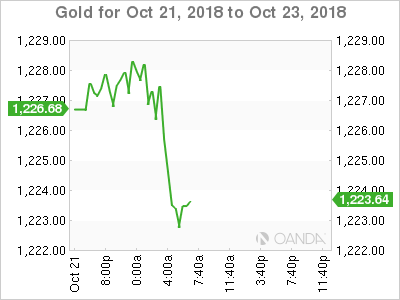 3. Italian yields drops by most in 4-months on Moody’s decision

Italian sovereign yields dropped across the curve after ratings agency Moody’s kept the country’s sovereign ratings outlook ‘stable’ while delivering an expected downgrade last week. The market was worried that the outlook would be ‘negative.’

Note: S&P’s review is expected this Friday (Oct 26). It now rates the country two notches above junk at BBB. 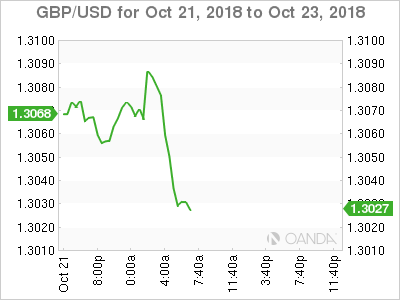 4. Dollar quiet across the board

The EUR/USD is a tad lower at €1.1515 after testing a high of €1.1550 overnight on the back of a relief rally in the 10-year BTP/Bund spread. Nevertheless, event risk persists ahead of the deadline for Italy to respond to the E.U Commission’s initial objections over the 2019 budget plan.

Expect Thursday’s ECB meeting to be closely watched, especially Draghi’s press conference, where the market is looking for more color on how the ECB would reinvest maturing QE proceeds post December this year.

GBP/USD is -0.3% lower at £1.3030 as Brexit talks again reached an impasse. However, PM Theresa May believes that +95% of the Brexit withdrawal deal is “now settled.” It’s believed that the PM is facing a rebellion by more than 40 Tory MP’s if she does not back down to fresh demands from Brexiteers’

Note: 48 votes are necessary for a leadership challenge 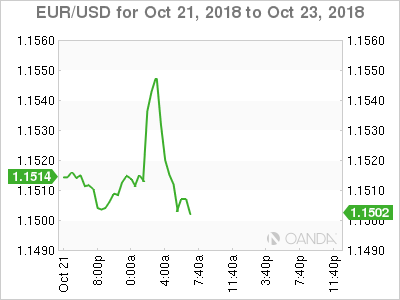 The Italian government is ready to sit and discuss its budget targets with E.U, Deputy Prime Minister Luigi Di Maio said this morning, restating that the “populist” coalition had no plan to leave the euro.

Italy has sent a letter to the commission explaining its reasons for sticking to the +2.4% goal, and that the government was ready to “sit at the table”. 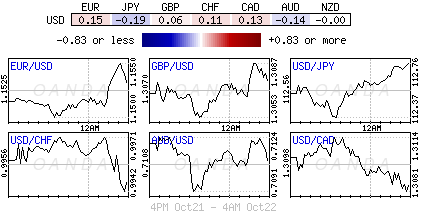 No Fireworks at ECB Meeting, but PMIs Could Drive Euro

EUR/GBP: Brexit and BOE and Bears, Oh My!

WTI Futures May Have More Weakness in Store in Short Term

EURUSD On The Ropes