Dollar Little Changed Ahead Of US Congressional Elections

FOREX: The dollar was marginally higher versus a basket of currencies on Tuesday, after losing around 0.3% the previous day. Traders will be eyeing the US congressional elections as a potential driver for the world’s reserve currency during today’s trading.

STOCKS: Wall Street finished the day mixed on Monday, with the Dow Jones (+0.76%) and the S&P 500 (+0.56%) advancing and the tech-heavy Nasdaq Composite (-0.38%) edging lower; Apple, Amazon, Google-parent Alphabet and Facebook were some of the notable losers. In Asian markets, the Japanese Nikkei 225 and Topix indices added 1.1% and 1.2% respectively, while Hong Kong’s Hang Seng was up by 0.6%. It is of note that the Shanghai Composite lost 0.2% even as China’s vice president signaled readiness to discuss a trade solution with Washington. At 0652 GMT, futures markets were pointing to a higher open for major European benchmarks, albeit they weren’t suggesting steep gains. Contracts on the Dow, S&P and Nasdaq 100 were projecting a slightly higher open.

COMMODITIES: WTI was 0.35% down, trading not far above its lowest since April of $62.52 per barrel hit on Monday. US sanction exemptions that will enable Iran’s biggest oil customers to continue purchasing the precious liquid from Tehran, combined with concerns that an economic slowdown will weaken demand were seen as the catalysts for the move down. Brent crude was 0.6% down, below the $73.00/barrel mark. In precious metals, gold was little changed, around $1,231/ounce. Should the US midterm elections be seen as creating significant policy uncertainty, then the metal may receive safe-haven inflows. 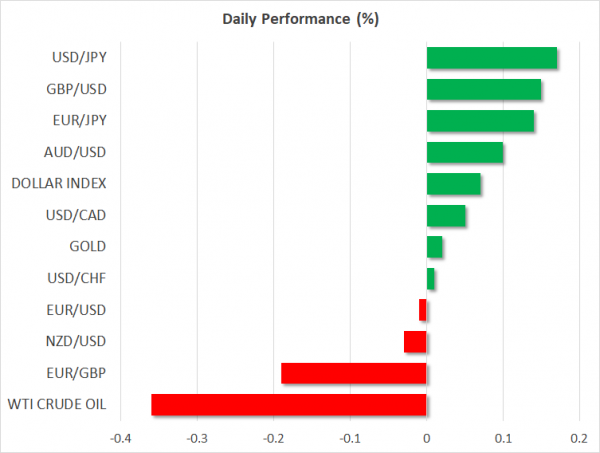 The dollar index, which measures the performance of the US currency against six major counterparts, was basically flat at 96.32. A risk-event for the greenback are today’s midterm elections. A split Congress is the likely outcome, with Democrats getting back the House of Representatives and Republicans keeping the Senate. This is a relatively market-friendly result as it won’t allow the Democrats to roll back the Trump administration’s tax cuts.

Sterling extended recent gains on the back of optimism for progress in Brexit discussions. GBPUSD recorded a fresh two-week high of 1.3085 earlier on Tuesday, while EURGBP traded not far above a freshly hit near four-week low of 0.8726. A meeting between PM May and her cabinet to touch on the latest Brexit proposals is on the agenda on Tuesday.

USDJPY was higher even in light of cautiousness ahead of the midterm elections, posting a four-week high of 113.44.

EURUSD was marginally down, with Italian politics being in focus for the common currency’s direction. In terms of the latest developments, eurozone finance ministers called on Italy overnight to amend its 2019 budget in order to comply with EU fiscal rules before a deadline set for next week. Rome is refusing to give in to the demand. The more heated the confrontation, the more likely is the euro to suffer, at least in the short-term.

Elsewhere, AUDUSD was higher by 0.1%. During Tuesday’s Asian session, the Reserve Bank of Australia maintained its benchmark rate at a record low and said it expects a gradual pickup in inflation over the next couple of years. The kiwi dollar was little changed versus its US counterpart ahead of key data on employment out of New Zealand later on Tuesday. 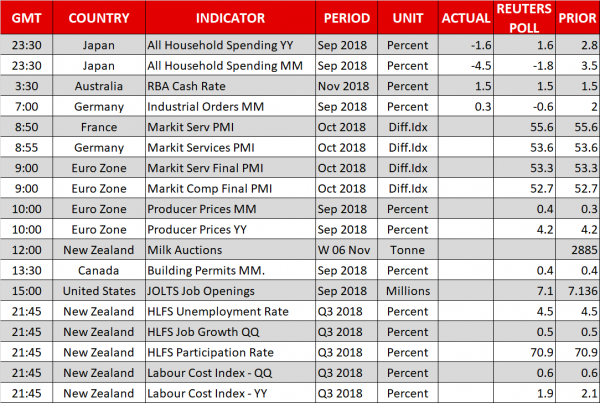 Day ahead: US midterms outcome pending; producer prices, final services and composite PMIs out of the eurozone; US job openings and New Zealand’s jobs data also due

Besides the outcome of the US midterm elections, final PMI prints and producer prices out of the eurozone, as well US job openings are some of the releases on Tuesday’s calendar.

At 0900 GMT, the eurozone will see the release of final services and composite PMI prints for October. The two are expected to be confirmed at their preliminary readings of 53.3 and 52.7 respectively, their lowest in around two years, confirming that economic momentum in the euro area continues to lose steam. The flash releases tend to be fairly reliable and barring a significant deviation from expectations the data are unlikely to prove market-moving.

Also out of the euro area are September’s producer prices due at 1000 GMT. Those are anticipated to grow by 0.4% m/m, up from August’s 0.3%. This would leave their annual pace of expansion at 4.2%.

Today’s bi-weekly milk auction may provide some short-term direction to the NZD, given that dairy products are New Zealand’s largest goods export earner; higher prices are seen as kiwi-positive. Some calendars expect the numbers to hit the markets at 1200 GMT, though this is a tentative release and may well be made public at some other point in time.

Quarterly New Zealand jobs data due at 2145 GMT have much greater potential to move the local dollar though; the figures on wage growth will be of particular interest.

Out of North America, Canadian building permits for September are on the agenda at 1330 GMT, with the US JOLTS job openings report for the same month following at 1500 GMT. At 7.1 million, job openings are projected to remain very close to August’s record high of 7.136m.

But all eyes in the US will be on the outcome of the midterm elections, with the markets possibly to face heightened volatility. Expectations are for the Democrats to win the House of Representatives, with Republicans anticipated to keep the Senate. Deviations from expectations are what’s likely to cause the most movements in the markets. For example, in the unlikely scenario that Republicans manage to maintain both chambers of Congress, then stocks will probably rally, given that Republicans have traditionally been considered as pro-market and anti-regulation.

The ECB’s Coeure (1115 GMT) and Lautenschlager (1200 GMT), will be giving speeches today, with fellow policymakers Praet and de Guindos also being on the agenda.

In energy markets, weekly API data on US crude stocks are due at 2130 GMT. 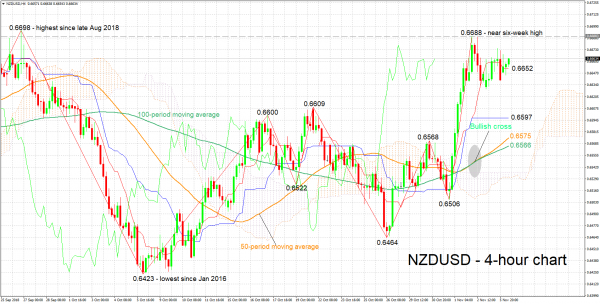 NZDUSD is trading roughly 30 pips below the near six-week high of 0.6688 hit on Friday. The Tenkan- and Kijun-sen lines are positively aligned in support of a bullish bias, though they have both flatlined, overall projecting a predominantly neutral picture in the short-term.

Upbeat New Zealand data, especially on wage growth, are expected to boost the pair. Resistance to gains may take place around Friday’s near six-week peak of 0.6688; the area around this captures the 0.67 handle and consequently the pair’s highest since late August of 0.6698. Higher still, another top at 0.6726 would be eyed, while a barrier to steeper gains may come around the 0.68 mark.

On the downside and in the event of disappointing data out of New Zealand, support could come around the current level of the Kijun-sen at 0.6507; the zone around this includes a couple of tops from the recent past at 0.66 and 0.6609. This, given that the Tenkan-sen at 0.6652 is violated first. Even lower, the current levels of the 50- and 100-period moving average lines at 0.6575 and 0.6566 would be eyed.

US data, as well as the outcome of the midterm elections, can also move the pair.