As was widely expected, RBNZ remained on hold at +1.75%, yet may have sounded less dovish than expected. Despite the bank being cautious, its forecasts include the official cash rate remaining at +1.75% for 2019 and implied a rate hike in 2020. The bank also expects the core inflation rate to gradually rise to 2% yoy mid-point which necessitates a continued supportive monetary policy. Analysts pointed out that the bank seems to have time at its side, albeit they expect that as the year progresses growth could undershoot the bank’s projections causing for a more dovish stance. Governor Orr in his press conference stated that the chances of a future rate cut have not increased. For the short term we expect the Kiwi to continue to strengthen a bit further, though a correction may be in the cards. NZD/USD spiked on the release of RBNZ’s interest rate decision, breaking the 0.6780 (S2) and later on the 0.6825 (S1) resistance lines (now turned to support). We see the case for the pair to remain in a bullish market yet some correction lower could be in the cards. Should the pair find fresh buying orders along its path, we could see it breaking the 0.6860 (R1) resistance line and aim for the 0.6900 (R2) resistance level. On the flip side, should the pair come under the selling interest of the market, we could see the pair breaking the 0.6825 (S1) support line and aim for lower grounds.

The USD edged lower yesterday and during today’s Asian session as hopes for progress in the US-Sino negotiations were elevated. Analysts point out that this weakness seems directly related to the improving risk sentiment around trade. The risk sentiment also got a boost from US president Trump’s comment that he could let the 1st of March deadline “slide for a little while” despite preferring not to, and that he expects to meet Chinese President Xi to close the deal at some point. The focus of the markets is expected to be the high level trade talks this week in Beijing and further developments to be closely watched. USD’s role as a safe haven seems currently to have weakened and should there be further progress in the US-Sino trade negotiations it could weaken further. EUR/USD rose yesterday and during today’s Asian session, breaking the downward trendline incepted since the 31st of January as well as the 1.1300 (S1) resistance line, now turned to support. As the pair has broken the prementioned downward trendline, we abandon our bearish outlook in favor of a sideways movement, yet suspect that the bulls maybe waiting around the corner. Should the bulls continue to dictate the pair’s direction, we could see it breaking the 1.1345 (R1) resistance line and aim for the 1.1385 (R2) resistance level. On the other hand, should the bears take over, we could see the pair breaking the 1.1300 (S1) support line and aim lower. 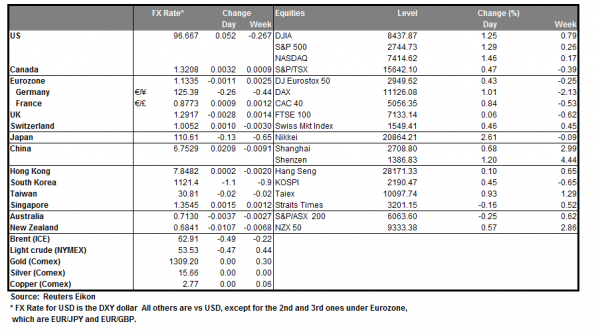