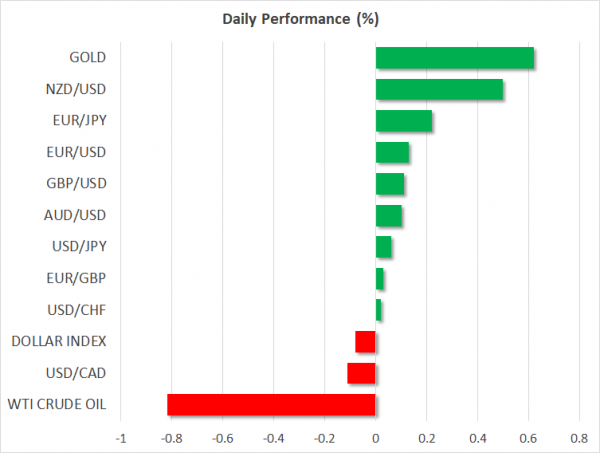 Fed Chairman Jerome Powell paved the way for a rate cut on Tuesday, in his first remarks since the collapse of the US-China trade talks. Speaking at a Fed event in Chicago, Powell referred to the recent spike in trade tensions, saying “We are closely monitoring the implications of these developments for the U.S. economic outlook”. Markets cheered when he added that the Fed would act “as appropriate” to maintain economic expansion, subsequently dropping any mention for the need to be ‘patient’.

US stocks rallied on Powell’s comments as investors interpreted this as a signal the Fed was ready to cut rates should the economic outlook continue to worsen. The Dow Jones, S&P500 and the Nasdaq Composite all closed more than 2% higher, recovering sharply from multi-month lows. E-mini futures point to small gains for US equities today.

European shares also closed sharply higher yesterday, but futures were slightly negative ahead of the market open, while in Asia, Chinese indices bucked the trend to close marginally lower. This suggests there’s still plenty of risk aversion prevailing over markets as there doesn’t appear to be any way out from the trade conflict that’s threatening to push major economies around the world into recession.

As US and Chinese officials continued to blame each other for the breakdown in trade negotiations, the only positive headline to emerge in recent days was that US Treasury Secretary Steven Mnuchin will be meeting with China’s central bank governor at the G20 meeting of finance ministers this weekend.

There was a more muted response in currency markets to Powell’s remarks, with the dollar slipping to fresh lows before rebounding a little. The dollar index touched a 7-week low just below the 97 level, while against the yen, the US currency managed to recover back above the 108 handle from yesterday’s 5-month trough of 107.83.

Concerns persist about the strength of the US economy following this week’s soft ISM manufacturing PMI and factory orders. The next big data to watch will be today’s ISM non-manufacturing PMI ahead of Friday’s nonfarm payrolls report.

The softer dollar continues to benefit struggling European currencies, however, with both the euro and the pound bouncing back from recent lows. The euro is currently trading near 7-week highs around $1.1260 but further gains may be difficult given renewed worries about Italy. The country risks facing disciplinary action by the European Commission for breaching EU budget rules amid reports the two deputy prime ministers discussed the possibility of raising Italy’s budget deficit above the 3% limit. Italian yields are now above that of Greece, highlighting the loss of investor confidence in the Italian government to manage its debt.

The pound’s rebound has been more restrained in comparison even as President Trump promised the UK a “phenomenal” trade deal after Brexit during his state visit to Britain. Fears of a hard Brexit are running high as most of the leading contenders to replace Theresa May as prime minister support a no-deal exit if no agreement can be reached with the EU by October 31. The pound has managed to crawl just above the $1.27 level but could struggle to hold on to it if today’s UK services PMI follows the negative trend set by the manufacturing and construction PMIs, which both fell short of expectations.

The Australian dollar, along with its New Zealand cousin, continues to outperform even in the face of a slowing economy and a rate cut by the Reserve Bank of Australia. Australia’s economy grew by a weaker-than-expected 0.4% quarter-on-quarter in the first months of the year to produce an annual rate of 1.8% – the slowest in a decade.

Earlier this week, the RBA followed the Reserve Bank of New Zealand in cutting rates in a pre-emptive move to stave off an economic slowdown. But with the US Fed now also looking likely to cut rates in the near future, the aussie and kiwi are being supported by narrowing yield differentials. The aussie last stood just above the $0.70 level, while the kiwi was close to a 5-week high at $0.6640. 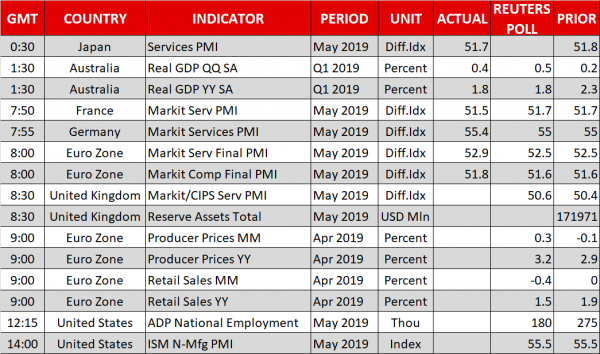