US stocks are poised to open higher as markets await developments on the trade front and the situation in Hong Kong.  This is turning out to be a difficult week for President Xi as he is seeing his Communist Party be threatened by Hong Kong’s fight to maintain autonomy.  Xi cannot allow Hong Kong a win, otherwise the mainland will see that the power of protesting could change policy.  With no meaningful updates expected in the US – China trade war until we get closer to the June 28-29th G20 Summit in Japan, we could see markets remain slightly optimistic until then.

The morning data release in North America saw limited market reactions after pretty much coming in line with expectations.  US jobless claims rose 3,000 to 222,000, slightly above the 4-week moving average of 217,750.  US import prices also declined slightly more than expected at 0.3%. Canada’s April new home price index was unchanged from a month ago and matching the analysts consensus.

Former Foreign Secretary Boris Johnson had a strong outing at the first round of voting in U.K. Conservative leadership contest to succeed Prime Minister Theresa May.  Johnson dominated with 114 votes, while Foreign Secretary Hunt came in second place with 43 votes and Environment Secretary Gove won 37 votes.  The field is narrower as Former Leader of the House of Commons Andrea Leadsom, Former Chief Whip Mark Harper and are Former Work and Pensions Secretary Esther McVey all got eliminated after failing to receive enough support.  The next rounds of voting is expected on June 18th, 19th, and 20th.

The British pound saw little reaction to the voting results and remains unchanged on the session at 1.2689. 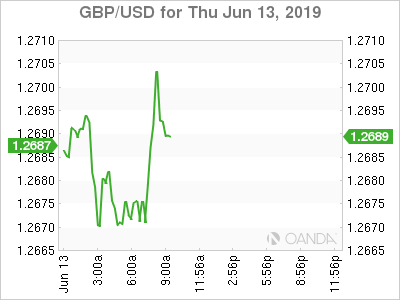 The SNB kept rates steady and introduced a new policy rate, since the Libor rate is being put away for good.  The bank reiterated their pledge to battle currency strength and will keep policy as expansionary as before.

The Swiss franc is the best performing currency and it could see further gains once the Fed capitulates in delivering rate cuts.  Global growth deterioration that has stemmed from the global trade wars is seeing investors still flee to the franc. 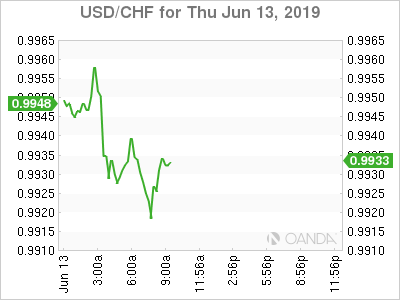 Crude prices jumped higher after reports that two tankers were attacked and sustained damage in the Gulf of Oman.  The suspected attack follows is the second major one near the Strait of Hormuz, a key passage where roughly 30% of the world’s sea-borne crude oil passes.  Roughly a month ago four oil vessels were sabotaged at United Arab Emirates port of Fujairah, in what the US says were attacks led by Tehran.  Geopolitical risks are tentatively stopping the recent downtrend with oil prices which have fallen to near five-month lows.

Instability in the region could threaten oil supplies in what will likely become a tug-of-war battle for oil prices as sellers will focus on falling global demand.  Oil was ripe for a pullback, especially after the recent slide fell into bear market territory and approached key psychological levels (Brent $60/WTI $50).  Oil could see a strong rush of bullish momentum if Trump and XI are able to deescalate their trade war at the end of the month.

OPEC also released their monthly report which delivered a warning that trade tensions are hurting global oil demand.  The group is targeting demand growth below 1 million barrels a day in the first quarter.  Poised for the weakest growth in a decade, demand will remain vulnerable as long as China and the US cannot reach an agreement.

OPEC still needs to finalize when they will meet, and expectations are they will still curtail production even as US production rises to new record levels.  A successful OPEC + agreement will require the support from Russia and Iran, possibly a tall task given the current political environment. 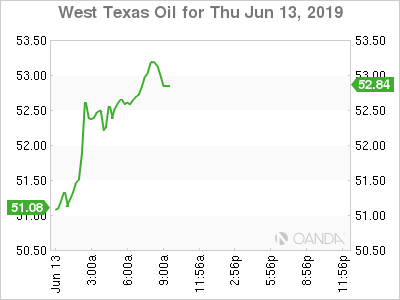 Gold could continue to benefit on cooler US inflation data which drove up Fed rate cut expectations.  The yellow metal did not receive much of boost from the reports of tanker attacks in the Gulf of Oman.  If the situation continues to intensify in the Middle East, gold should extend their recent gains. 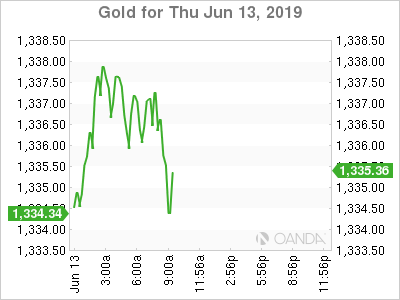 Gold Looking To Rebound On 38.2% Fibonacci After Pausing Downtrend