Wednesday June 19: Five things the markets are talking about

The dollar is largely unchanged overnight against G10 currencies as investors await central bank meetings, including the conclusion of the Fed’s two-day meeting later today.

Yesterday, ECB president Draghi signaled that the central bank could embark on new stimulus measures in light of risks over the eurozone’s economy. This potential shift in policy by the ECB will certainly make interest-rate increases by other central banks more difficult.

Today, the focus is on the Fed (02:00 pm ET), investors are widely expecting the Fed to cut rates at some point in the coming months, but not today. Currently the market is pricing in a pace of easing that would only be justified by a recession – the potential of two to three cuts by Q1, 2020. Are things that bad? Fed Powell’s press conference should be very interesting (02:30 pm ET).

On tap: Central Banks dominate proceedings this week – the Fed, Bank of Japan and Bank of England all set monetary policy, along with central banks in Norway, Brazil, Taiwan and Indonesia.

1. Stocks given the green light

In Japan, the Nikkei has rallied hard overnight to end atop of its six-week highs on news that the U.S and China will revive talks on trade, while expectations that the Fed will cut rates later this year is giving added support. The Nikkei share average jumped +1.7%, while the broader Topix also climbed +1.7%.

Note: President Trump said he would meet with Chinese President Xi Jinping at the G20 summit later this month and said talks between the two countries would restart after a recent lull.

Down-under, Aussie stocks ended at their 11-year highs overnight, as investors took comfort from the U.S and China rekindling trade talks. Australian resource stocks gained the most. The S&P/ASX 200 index climbed +1.2%. It had risen +0.6% on Tuesday when the Reserve Bank of Australia (RBA) had pointed to further policy easing in the future. In S. Korea, the Kospi closed +1.2% higher.

There were no surprises in Hong Kong or China as stocks closed higher as Washington and Beijing looked to rekindle trade talks. In China, the blue-chip CSI300 index rose +1.3%, while the Shanghai Composite Index gained +1.0%. In Hong Kong, stocks posted their best session in seven-months. At the close, the Hang Seng index rose +2.6%, while the China Enterprises Index gained +2.5%.

In Europe, regional bourses trade lower across the board consolidating after sharp gains Tuesday, following a strong session in Asia and flat futures in the U.S. 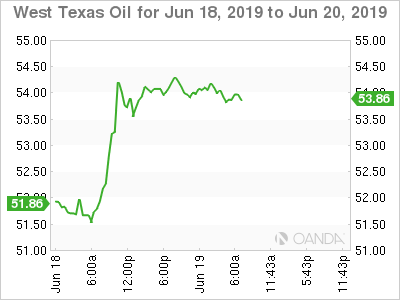 Oil prices have extended their gains overnight, supported by rekindled hopes for a Sino-U.S trade deal and potential economic stimulus from central banks.

Also providing support is the uptick in tensions in the Middle East after tanker attacks there last week. Washington blames Iran, but Tehran denies any involvement. President Trump has indicated that he is “prepared to take military action” to stop Iran having a nuclear bomb.

The market is also waiting for the OPEC+ meeting where members will decide whether to extend a supply reduction pact that ends this month. This morning, OPEC has agreed to move its next meeting to July 1, followed by a meeting with non-OPEC allies on July 2. Joint technical committee will meet June 30. 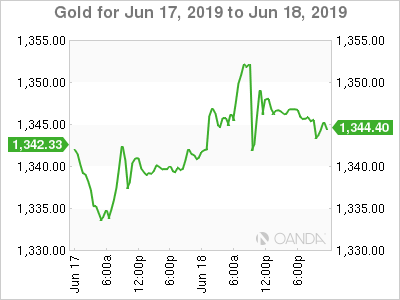 Fixed income markets are in pause mode following yesterday’s plunge in European bond yields as Draghi opened the ECB forum in Sintra on a “dovish” note.

Currently, bond yields are a tad higher after yesterday’s plunge. ECB policy makers seem to be divided after Draghi’s ‘dovish’ speech. Ten-year bond yields across the bloc are +1-2 bps higher in early trade. Germany’s 10-year Bund yields are a touch higher at -0.31%, having hit a record low at -0.33% yesterday when it fell almost -8 bps – its biggest one-day fall in three-years. 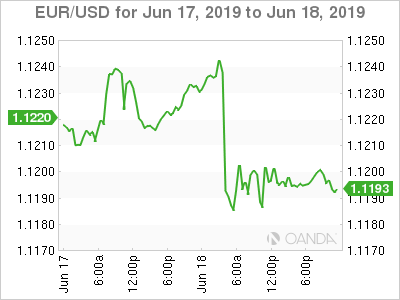 EUR/USD (€1.1202) has remained well contained since ECB’s President Draghi said yesterday that more bond-buying or interest rate cuts were options to tackle low inflation. The uptick in ‘dovish’ rhetoric will appease EUR bears. However, they have to wait for the Fed for clarity on potential U.S rate cuts to gain further support. The EUR/USD hit a two-week low of €1.1181 Tuesday.

Data showing U.K annual CPI inflation slipping to +2.0% in May from +2.1% in April has failed, thus far, to impact the pound, with GBP/USD last up +0.1% at £1.2569. Brexit uncertainty is unlikely to push the BoE into flagging possible rate cuts, as the ECB and Fed have done.

Elsewhere, TRY ($5.8629) is under pressure outright on reports that the Trump administration is weighing new sanctions on the country over its purchases of the Russian S-400 missile-defense system. 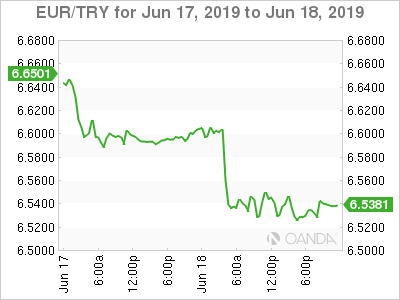 Boris Johnson has taken a step closer to becoming U.K’s next PM, winning +40% of votes in the second round of a contest on a firm promise to leave the E.U by Oct. 31.

The candidates contending to be the U.K’s next PM has been whittled down to five and will be cut to the final two by the end of the week.

Boris Johnson has extended his lead to quite a significant margin and used last nights debate to provide a few more details on how he intends to sort out Brexit. 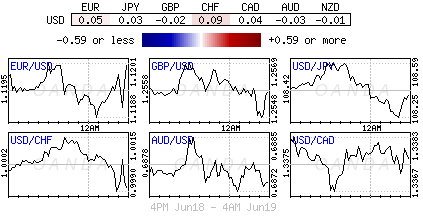 Fed Mester: Reopening may be more protracted than anticipated

Fed Clarida expects rebound in activity in Q3, but course of economy is a complex picture