The USD weakened further yesterday against a number of its counterparts as the currency continues its bearish walk. US bond yields dropped as well, contributing to the dollar’s weakness and some analysts consider the possibility of a 50 basis points rate cut by the Fed in its next meeting. On other news, tensions with Iran seem to be rising, helping safe haven currencies strengthen even further against the USD. Also on other developments yesterday, the US administration seems to be targeting the Iranian supreme leader Ayatollah Ali Khamenei and other top Iranian officials with sanctions. Without underestimating the US-Persian tensions, we tend to consider the USD as more Fed driven and focus on Fed Chairman Powell’s speech later today (17:00, GMT).

USDCHF continued its downward trend line formed since the 19th of June. The pair is currently trading between our (R1) 0.9715 resistance level and our (S1) 0.9673 support level. If the Swissy is to continue its downward momentum we could see it breaking below the (S1) 0.9673 support level and aim even lower for the (S2) 0.9625 support line. Even lower, the next possible stop could be at 0.9580 (S3) support barrier. In the opposite direction, if the bulls are looking to take back some ground we could see the pair breaking above the (R1) 0.9715 resistance level and aiming for the (R2) 0.9755 resistance hurdle. Even higher we could see the (R3) 0.9800 resistance barrier being the next most probable stop. The RSI indicators below the chart displays a strong selling market as it is steady below the 30 level in the past sessions.

RBNZ is expected to release its interest rate decision, tomorrow during the Asian session (02:00, GMT). The respected forecasts are for RBNZ to remain on hold at +1.50% .Currently NZD OIS imply a probability of 72.73% for the bank to maintain its current policy rate level, with the rest being in favour of a 25 basis points (bp) rate cut. Given that the bank had a rate cut in its latest meeting after two years and the GDP growth rate improved in its latest release somewhat, we expect the bank to remain on hold, or better in a wait and see position. However we also expect the bank to maintain a dovish tone which would allow it to keep the door open for further rate cuts in August or September meeting. Please be advised that the market (NZD OIS) seems to be pricing in by 83% a possible rate cut in the August meeting. We expect the bank to remain on hold, yet at the same time, should the bank sound more dovish than what the market expects we could see the Kiwi weakening.

NZDUSD has been steadily climbing since the 18th of June. The RSI indicator is our 4 Hour chart is just above the 70 level and could be sending the message of an overloaded buying momentum that could be looking to make a correction. However, for the time being, the Loonie is trading between our (R1) 0.6650 resistance level and our (S1) 0.6610 support level. If the loonie continues to rise we could see it break above the (R1) 0.6650 resistance level and aim for the (R2) 0.6685 resistance level. If the pair is to move even higher we could see the next stop being at 0.6725 (R3) resistance level. In the contrary, if the pair is to correct lower the most probable stops could be the (S1) 0.6610 and even lower the (S2) 0.6565 and the (S3) 0.6515 support lines. Please be advised the pair may come under volatility upon RBNZs Interest rate decision tomorrow.

Today during the US session, we get Canada’s final Wholesale Trade for April and the US Consumer Confidence for June. During tomorrow’s early Asian session, we get the API weekly crude oil inventories and from New Zealand the RBNZ interest rate decision. 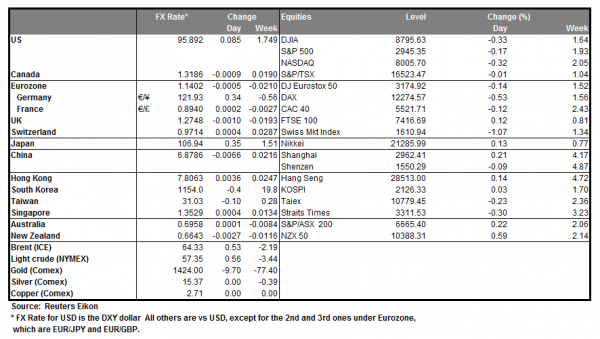 UK to introduce digital tax in April, US threaten retaliation with auto tariffs

Financial Market Participants Are Focused On The Chinese Coronavirus. We Expect The Bank Of Canada Meeting