It was a big week for Fed communication. Fed Chair Powell took center stage with his semiannual testimony to Congress, while minutes from the Federal Open Market Committee’s (FOMC) June meeting shed light on participants’ views of the risks to the economy.

The key takeaway from Powell’s prepared remarks was that the Fed Chair still sees crosscurrents and uncertainty as weighing on the outlook. Given that this was the key factor behind the FOMC’s increased willingness to provide additional accommodation, this was as clear a signal as any that a July rate cut is happening. Nailing the coffin closed, when the Chair was asked if the strong June jobs report had done anything to change his mind, he replied, “a straight answer…is no.”

Between now and the July 31st meeting there are data on retail sales, housing starts, home sales, durable goods orders, and a few others. Even relatively positive outcomes on all these reports are unlikely to move the Fed off that 25-basis point cut. They could, however, go a long way to moving market pricing for additional cuts (almost three by the end of this year). In the meantime, Fed speakers have one more week to communicate their take on economic data before the quiet period preceding the July meeting.

The other message in the Fed’s accompanying Monetary Policy Report as well as Powell’s Q&A sessions was the recognition that inflation is weak, and the labor market may still have some room to grow – even with an unemployment rate at 3.7%. Perhaps the most interesting response Powell gave over the two days of testimony was to a question about the possibility that lower interest rates would cause the labor market to run hot. His response was: “you know, I guess I would start by saying we don’t have any basis for calling this a hot labor market.”

Powell went on to say that wage growth of 3%, while better than the 2% it was five years ago, is “barely keeping up with productivity.” In fact, productivity growth has accelerated over the past year, and, as a result, the cost of adding workers relative to the output they produce has declined (Chart 1). Absent evidence of wage inflation, the Fed is unlikely to get too heated by a low unemployment rate, even if it continues to push further below its long-run estimates.

Nonetheless, sometimes the data zigs just when everyone expects it to zag. While the Fed Chair cited the risk that weak inflation would prove more persistent than anticipated, the CPI out this week showed prices rising firmly in June. Core CPI (excluding food and energy) rose 0.3% on the month – the strongest gain since January 2018. Price growth firmed for both core goods and services (Chart 2). Still, with the year-on-year headline rate at just 1.7% and core at 2.2%, the firetrucks can stay parked for now. 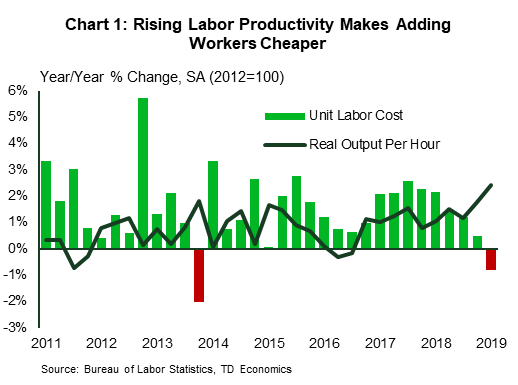 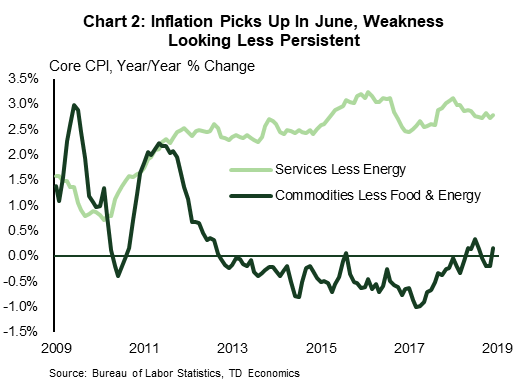 It was a relatively quiet week in Canadian markets. Despite a modest climb in oil prices, the S&P/TSX composite index was set to end the week relatively flat. So too the loonie, which despite some mid-week volatility, sat pretty close to where it started the week as of mid-morning Friday.

The main economic events, both here and elsewhere this week were central bank driven, and Wednesday was the main event. South of the border, Federal Reserve Chair Jerome Powell’s testimony to Congress all but confirmed that a policy interest rate cut would be coming at the end of this month (see commentary). With most major economy central banks leaning towards additional stimulus in the wake of softening momentum, the Bank of Canada had a fine line to walk given relatively healthy domestic data and the external negative risks.

And walk the line they did. The statement that came with Wednesday’s decision to leave the key overnight interest rate at 1.75% went right down the middle: the external risks were front and centre, and the economic outlook was downgraded a touch, but there were few signals that Canadian monetary easing is on the table (See our thoughts). Instead, the message was again one of risk management. The Bank stands ready to act in the event of a deterioration in economic activity, but this is not their base case, and they feel no urgency to replicate the expected ‘insurance’ cuts of the Federal Reserve.

There is also an argument to be made that the Bank of Canada is trying to avoid a situation where markets become convinced of easing to the point where a failure to act may create undue volatility. The evidence for this may be the Bank’s relatively conservative economic growth forecast. Compared to our view, the Bank of Canada envisions a slightly more modest pace of activity this year (Chart 1).

A significant part of the Bank of Canada’s cautious near-term view is related to housing. This appears to be a note of caution given the available data. Even allowing for a modest pull-back of activity in June (figures are due Monday), resales popped nicely in the second quarter. So too has homebuilding activity. Housing starts shook off their winter blues (Chart 2; see our commentary), and the more lagged investment data also points to healthy activity early in the quarter.

So, given the Bank of Canada took a neutral tone to go with this downgraded outlook, it stands to follow that the market would dial back cut expectations as the Bank of Canada’s forecast is modestly exceeded. This suggests a reluctance to ease monetary policy unless necessary – data dependence, not outlook dependence, in effect, and a different approach from their U.S. counterparts. In effect, the Bank of Canada appears to be comfortable taking a reactive approach, rather than a proactive one. Clearly, should negative risks materialize, we’d be in a different world, but for now, if you’re enjoying the drop in mortgage rates, thank Chair Powell, not Governor Poloz. 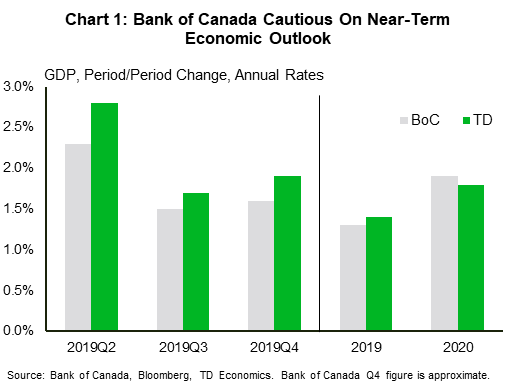 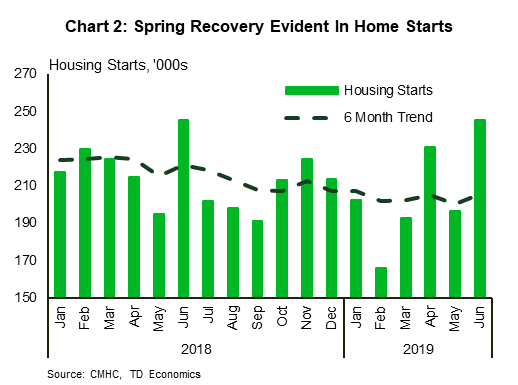 We expect another firm increase in sales in the key control group (+0.3% m/m) to be the main driver behind a 0.1% gain in headline retail sales, as consumer fundamentals remain sound (healthy labor market, steady real wages and high confidence levels). A firm gain in core sales should more than offset both a decline in sales at gasoline stations, which reflect a drop in gasoline prices in June, and a minor retreat in auto sales following a 0.6% increase in May. On net, retail sales should end the quarter with average annual growth at 3.2%, up from 2.8% in Q1. 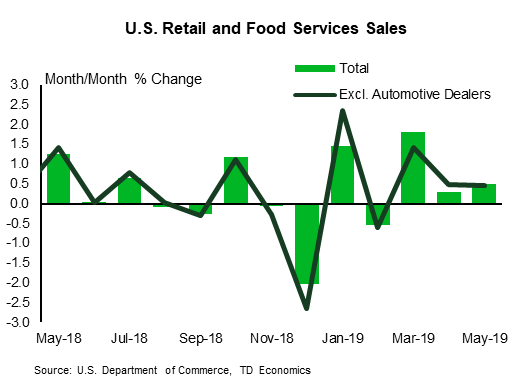 TD looks for headline inflation to decelerate to 2.1% y/y in June, with prices down 0.2% from May. Lower gasoline prices will provide the main driver for the monthly print; gasoline prices fell by 8% for the month as a whole, which should shave 0.3pp off the headline print in June. Elsewhere, food prices should see modest gains following the recent strength in producer prices. Still, 3.5% is likely to mark the peak for food price inflation since FX passthrough from a stronger Canadian dollar should start to provide some relief in the coming months. We also see scope for a pullback in telecom prices after new “unlimited” data plans were introduced by major service providers in early June. Looking past the headline, exclusion-based core measures (ie. ex food and energy) should hold stable given the large drag from energy prices, while the Bank of Canada’s preferred core measures are likely to edge lower to 2.0% y/y on average.

TD looks for manufacturing sales to rebound by 1.6% in May, driven by a sharp pickup in transportation products. Motor vehicles are only part of the story after temporary production shutdowns drove an 8.9% decline in manufacturing shipments last month. international trade for May showed a large rebound in motor vehicle exports, but also revealed a record $2.92bn in monthly aerospace exports. Outside of the transportation sector, forestry products will weigh on the headline print after a major logging company announced it will temporarily shutter production at 13 lumber mills starting April 29th. Manufacturing volumes should rise in line with the nominal series owing to flat producer prices in May, which will provide a tailwind to monthly GDP. 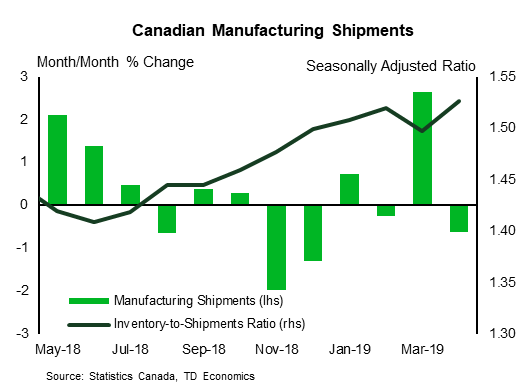 Retail sales are forecast to rise by 0.3% in May as lower auto sales provide an offset to a pickup in core retail measures. New vehicle sales are projected to edge lower on softer passenger car sales, and we expect a muted contribution from gasoline stations as the tailwind from higher prices dissipates. On the other end of the spectrum, the recreation component should provide a source of strength as NBA playoff spending makes its impact felt; restaurant sales are not included in the retail report, but the supplementary food and beverage survey should show similar gains. Building materials and home furnishings will provide another source of strength on the recent recovery in existing home sales. Retail volumes should see little change on account of the 0.3% (sa) increase in consumer prices, consistent with some moderation in household consumption from the 3.5% gain in Q1. 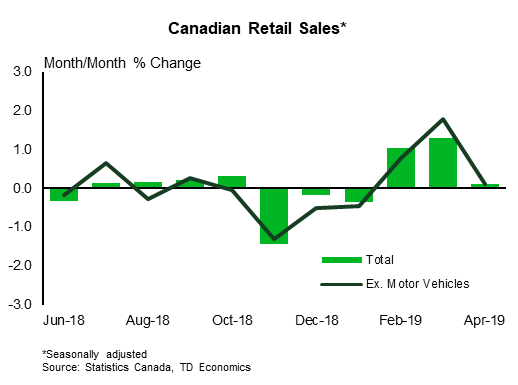 Aussie Rises As Australia Reported A Record Trade Surplus In May

FOMC Minutes: Changes in Forward Guidance and Asset Purchases could Come in September

US oil inventories dropped -7.2m barrels, WTI back below 40