During today’s Asian session, RBA released the minutes of its last meeting. The document states that the bank would consider additional policy easing if needed and that it will assess developments in domestic and global economies before considering it though. The bank also considers the AUD to be at the lowest level for some years which supports exports and tourism. It should be noted that the document states that further monetary easing could be widely expected worldwide. At the same time, China has set the new 1 year loan rate at 4.25% (vs. 4.31% previously) which could be considered as a slight stimulus as credit becomes a bit cheaper. The news could be considered as positive for Australian exporters, yet the impact may remain low in the actual economy as demand for credit is at the time considered to be low in China. AUD got a slight boost against the USD at the release of the news, however we would require more consistent strengthening to see an upward trendline. AUD/USD maintained a sideways motion between the 0.6740 (S1) support line and the 0.6800 (R1) resistance line yesterday and got a slight boost during today’s Asian session. We could see the pair maintaining its direction, yet volatility could occur as analysed, showed there be increased demand for the Aussie as analysed above. Should the bears dictate the pair’s direction, we could see it breaking the 0.6740 (S1) support line, aiming for the 0.6675 (S2) support level. Should the bulls take over, we could see the pair breaking the 0.6800 (R1) resistance line and aim for the 0.6860 (R2) resistance level.

The USD was supported against a number of its counterparts yesterday as the market seems to be slowly turning to riskier assets. As mentioned in yesterday’s analysis the market expects fresh stimulus to support the global economy, which improved the risk on sentiment somewhat. It should be noted that the increased appetite, lifted US treasury yields somewhat from previous lows, rising and providing some support for the USD. Analysts tend to note that the increased arguments for Germany’s government to provide a fiscal stimulus may have been a turning point for the USD which has regained momentum. It would be indicative that the dynamic differentials between the two currencies were expressed at their exchange rate as it neared a three-week low yesterday before bouncing back up again. The market seems not to have forgotten the US-Sino relationship tensions, yet at the same time turns its attention towards the Jackson Hole symposium as well as the G7 meeting, both near the end of the week. EUR/USD maintained a sideways motion between the 1.1050 (S1) support line and the 1.1100 (R1) resistance line yesterday, despite testing the 1.1100 (R1) during the American session yesterday. We could see the pair maintaining its direction, yet the pair may experience some volatility as the events which could fundamentally affect the pair’s direction draw near. Should the pair come under the selling interest of the market, we could see it breaking the 1.1050 (S1) support line, aiming for the 1.1000 (S2) support level. Should the pair find fresh buying orders along its path, we could see the pair breaking the 1.1100 (R1) resistance line and aim for the 1.1140 (R2) resistance level. 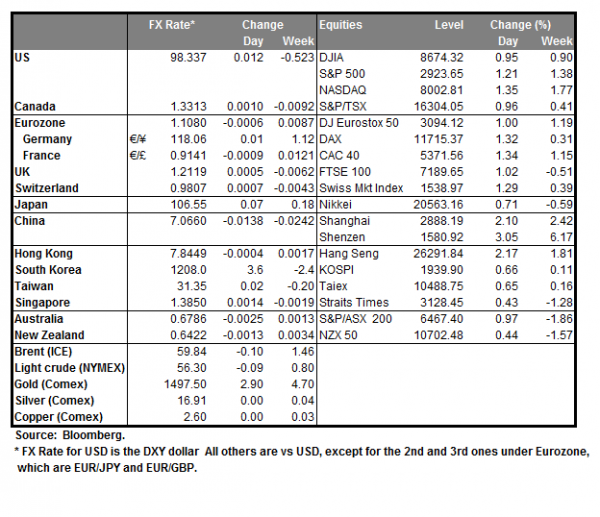