A week of broadly as-expected economic data developments was sideswiped, again, by a late-week Twitter tirade from US President Trump. The latest was a response to China announcing what should have been widely expected tariff hikes on US imports in retaliation for US planned tariff hikes on Chinese products on September 1st and December 15th – with another round of criticism of Fed Governor Powell thrown in. Our initial take is that the tariffs planned by China themselves looked relatively measured. As with the announced US measures, the bulk (about 2/3) of planned tariffs on ~$75 billion of imports from the US (which include autos and crude oil products among others) don’t kick in until December. Of the products targeted with September tariff hikes, about two thirds by our count will see a tariff hike of 5%, the rest a hike of 10%. Those rates are comparable to the 10% tariff hikes the US plans to impose, but on an import dollar value about a quarter the size of the ~$100 billion worth of imports the US is targeting in September.

A larger concern is the increasingly unpredictable rhetoric coming from the presidential Twitter feed that appears set to send US-China trade tensions right back to a full boil. The president has promised a rapid response to the new China tariff announcement. Nobody wins from a further escalation in tensions, and we continue to think that US economic vulnerability may be larger than China’s. Of course, the US president does not actually have unilateral authority to “hereby order” American companies to stop trading with China, as he did this morning on Twitter. But, congress has to-date shown little appetite to push back against unilateral tariff imposition by the Administration. Uncertainty about the economic backdrop clearly looks to be weighing on business sentiment and spending – and the international trade backdrop looks as uncertain as ever.

For Canada, ongoing trade concerns should continue to take the shine off of what otherwise has looked like relatively solid economic data. The end-of-month Q2 GDP report should confirm the economy performed reasonably well in the second quarter. Data to-date supports our forecast that GDP growth rebounded in Q2. We are looking for a 3% gain, a marked improvement following subpar growth of less than half a percent in each of the two prior quarters. A big chunk of the rebound in Q2 came from the oil & gas sector as earlier stresses (low global oil price benchmarks, wide Canadian price spreads, and mandated Alberta production cuts) eased. Activity outside of oil & gas production also picked up. Residential investment probably increased for the first time in six quarters with housing markets finding a near-term bottom in the spring. But business investment will still be a soft spot in Q2 with trade uncertainty dampening sentiment. And a big export-led surge in the often-volatile net trade balance will bump up the growth rate in the quarter but clearly looks unlikely to be repeated given rising global trade tensions. 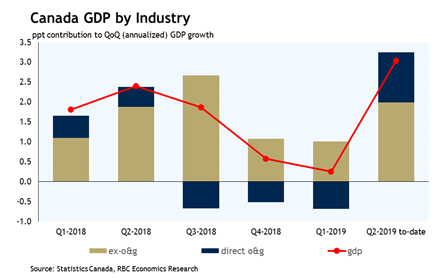