As Americans rushed off to start the weekend last Friday, President Trump announced that the U.S. was ratcheting up existing and planned tariffs on China by 5 percentage points. The measures, which would affect some $550bn in goods, were a response to China’s announcement that it would raise tariffs on $75bn worth of U.S. goods. However, tensions eased this week on indications that China wants to get back to the negotiating table, and would refrain from immediate retaliation to the latest U.S. action.

Equity markets shrugged off last Friday’s escalation, making a slow but full recovery on the week. Yet, there are strong indications that the trade conflict is a long way from being resolved. China clarified this week that products listed more than once in its three retaliatory rounds would in fact face a cumulative tariff rate. This would bring the tariff rate to 30% or higher for some imported U.S. products, including some autos and parts. On the other hand, the U.S. is still pushing ahead with an increase in the tariff rate from 10% to 15% that will affed $125B in goods starting this Sunday. Altogether, these steps may jeopardize progress in talks scheduled for September.

With trade dominating headlines once again, including an agreement in principle between the U.S. and Japan, economic data took a backseat. A second reading on U.S. economic growth left the picture relatively unchanged for the second quarter. The headline GDP print was shaved back marginally from 2.1% annualized to 2%, but consumer spending was upgraded from 4.3% to 4.7%. The consumer is poised to remain a central part of the growth story, with real spending up 0.4% m/m in July, making for a solid start to third quarter (Chart 1). Lower interest rates should help stimulate spending further, but much rests on the confidence channel. While overall sentiment remains upbeat, consumer expectations retreated in August, with trade skirmishes and talk of an impending recession weighing on people’s minds (Chart 2). The yield curve remained inverted this week, with the 10-to-2 year Treasury yield spread steadily in the red.

A veil of uncertainty continues to weigh on the broader global economic outlook. In Latin America, the Argentine peso severely weakened as the country remains in economic crisis and on the brink of default. Meanwhile, across the pond, the UK’s parliament is set to be suspended for a few weeks at the request of PM Johnson in an effort to make an unimpeded final push for Brexit before the October 31st deadline. Next week will likely prove to be a tumultuous Parliamentary session that could see a vote of no-confidence put forward by the opposition Labour leader, and an election call possible before the week ends. A snap election could delay Brexit further. Meanwhile in Italy, two parties are attempting to form a new coalition after the Northern League pulled out of the ruling coalition government. A prospective new alliance between an anti-establishment and a center-left party appears to stand on shaky ground. Moreover, opinion polls indicate that the the Northern League remains the most popular party, so the tide could again turn quickly. It’s clear to see that uncertainty is still the name of the game. 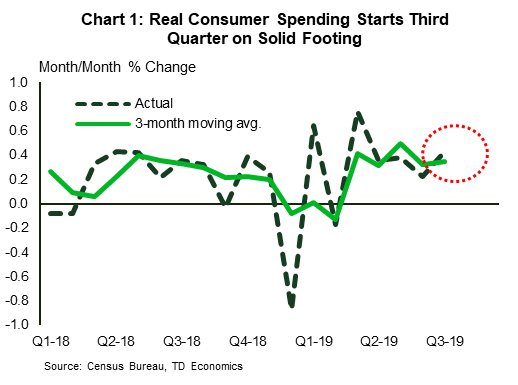 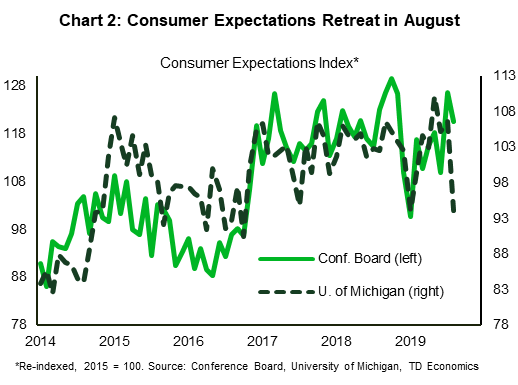 An easing in trade tensions resulting from Chinese officials’ remarks this week supported a modest uptick in sentiment, leaving the S&P/TSX Composite Index up 2.3% (as of writing). This renewed trade optimism, combined with a bullish U.S. inventory report inititally pushed oil prices up before they partially reversed some of the gains today, leaving the WTI benchmark with a 1% weekly gain at the time of writing.

On the data front, Statistics Canada’s quarterly GDP release was the highlight this week. The Canadian economy expanded at an impressive 3.7% (annualized) pace in the second quarter, topping consensus estimates and the Bank of Canada’s conservative 2.3% July forecast. As expected, driving this quarter’s gains was a dramatic contribution from net exports (Chart 1). This was largely anticipated given the monthly developments, including a transitory surge in aircraft shipments and the rebound in energy exports. Meanwhile, a 5.5% increase in residential investment was another noteworthy development, breaking five consecutive quarters of declines. Additionally, the broad-based increase (17 of the 20 industries) beneath June’s 0.2% growth in monthly GDP growth provides a bit of momentum heading to the third quarter.

With net trade leading the way, the other details of today’s report left a lot to be desired. Final domestic demand dropped 0.7%. Household consumption growth was positive, but moderated to a subpar 0.5% (Chart 2), the lowest quarterly reading seen since 2012. At the same time, business gross fixed capital formation was down 6.4% – driven by the sixth consecutive decline in non-residential structures (-1.8%) and a slump in machinery and equipment (-32%). Additionally, while export growth was strong at 13.4%, part of the contribution to growth from net trade was a broad-based 4% contraction in imports.

Despite the weak details, there are still some decent fundamentals. Household incomes rose smartly in the second quarter, the housing market has started to show signs of stabilization, and inflation (both headline and core) is stable near the Bank of Canada’s target. Standing in contrast are elevated trade tensions and subpar growth conditions seen elsewhere that have already prompted many central banks to change their policy stances and cut interest rates.

These opposing forces have left the Bank of Canada in a tough spot. The argument for any rate cut signals was likely tempered by healthy domestic conditions and the financial stability implications associated with elevated household debt. On the flip side, the bank has previously acknowledged the potential headwinds to business confidence, exports, and financial conditions that could stem from elevated trade uncertainty. We believe that the softer details in today’s report, together with the recent trade war escalation and uncertainty that shows no sign of abating, provide room for the Bank of Canada to shift its communication and narrative in its meeting next week towards a risk management approach, setting the stage for a precautionary rate cut at its October meeting. 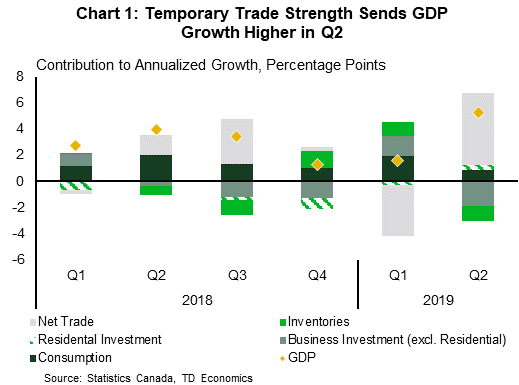 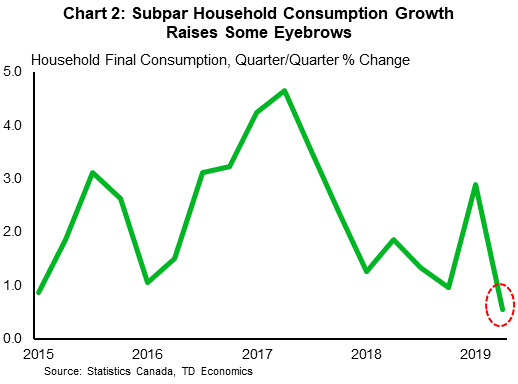 We look for the ISM manufacturing index to decline modestly to 51.0 in August from 51.2 before, as we expect the back-and-forth in trade retaliations to have maintained the outlook for manufacturing subdued. The message from the ISM-adjusted regional surveys was mixed, with the average of the indices supporting our view for a largely unchanged print. Other data was also mixed, as recent firm growth in core durable goods orders suggest some upside, while a weak Markit PMI survey increases the odds for a downside surprise in August. 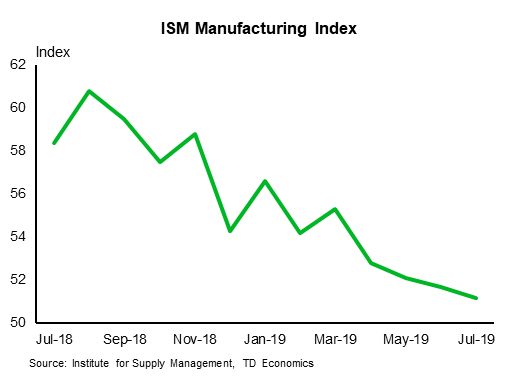 We expect payrolls to trend modestly lower to 145k in August, following the 164k print in the previous month. In particular, we expect job creation in the manufacturing sector to mean-revert after two consecutive double-digit increases in June-July. Together with slower hiring in construction, this should bring employment in the goods sector back to its recent average. Likewise, we forecast employment in the services sector to moderate further from its firm July print. We also note that the start of temporary census hiring for canvassing purposes raises the odds for an upside surprise in August. All in, the household survey should show the unemployment rate remained steady at 3.7%, while we expect wages to rise 0.2% m/m, dragging the annual print lower to 3.0% in August. 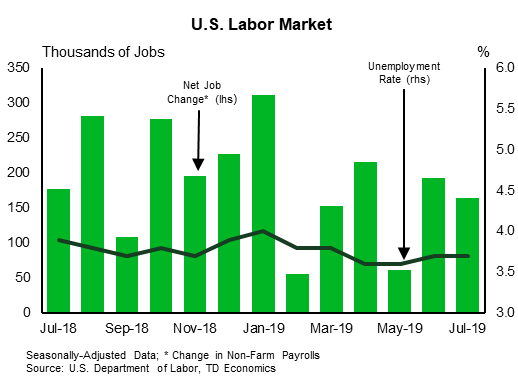 The international trade balance is forecast to deteriorate to a $200m deficit in July owing to further weakness in export activity, offset by a more modest decline for imports. Nominal energy exports will be supported by higher crude oil prices while non-energy exports will be weighed down by softer motor vehicle production. A stronger Canadian dollar will also exert a headwind to exports after USD CAD fell from 1.35 to 1.30 over the first two weeks of July. 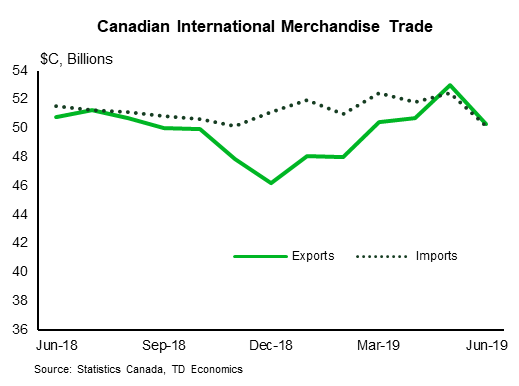 Q2 GDP growth was materially stronger than the BoC’s forecast from July, but declining domestic demand hints at cracks forming beneath the surface. We therefore expect the Bank to downplay recent economic strength in the face of worsening global trade tensions. Concerns over US-China relations should also be reflected in the forward-looking language, where we expect subtle dovish tweaks linking further stimulus to continued deterioration in the global outlook. 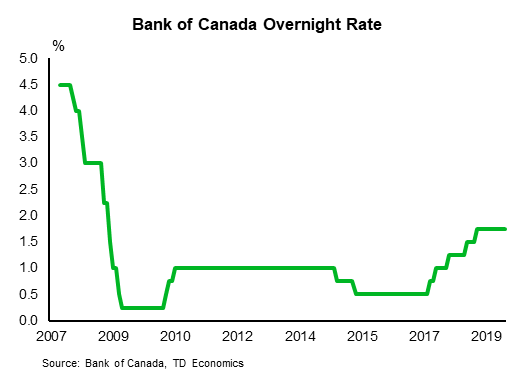 TD looks for the labour market to rebound with the creation of 15k jobs in August following the first back-to-back declines since late 2014. While we have argued that the strength of job growth through Q4/Q2 was unwarranted, the six-month trend has already cooled to 26k and would edge lower to 20k should our forecast be realized. We look for job growth to be led by the services sector and expect a partial rebound in private employment following a sharp contraction in July. Job growth of 15k should allow the unemployment rate to retrace lower to 5.6% while wage for permanent employees is edge higher to 4.7% y/y. 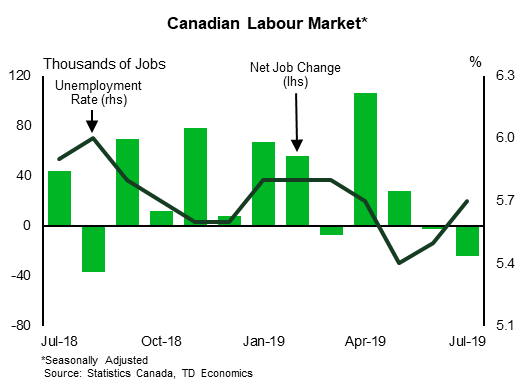