Action Forex
HomeContributorsFundamental AnalysisWeek Ahead – RBNZ Meets, But Geopolitics May Steal the Show

Week Ahead – RBNZ Meets, But Geopolitics May Steal the Show

The Reserve Bank of New Zealand (RBNZ) will be the sole major central bank that meets next week, but there’s a flood of economic data to keep traders busy – most importantly the euro area’s preliminary PMIs due on Monday. Beyond these, markets will also keep a close eye on the geopolitical arena as tensions in the Middle East continue to boil, and any serious escalation threatens to impact not only oil prices but global risk appetite too.

The euro area remains in dire straits, as a combination of trade tensions and Brexit concerns have started to take a real toll on the bloc’s exports and business investment. The European Central Bank (ECB) has therefore stepped in, slashing rates and restarting its asset purchase program to rekindle the ailing economy. The main takeaway from the latest ECB meeting though, was that monetary policy is near its limits, and that fiscal policy needs to start doing the heavy lifting.

Investors will get a sense of whether the Eurozone continues to lose momentum early on Monday, when the preliminary PMIs for September are due out. On Tuesday, Germany’s Ifo survey for the same month will be released. Meanwhile, ECB President Draghi will deliver remarks both on Monday and Thursday. 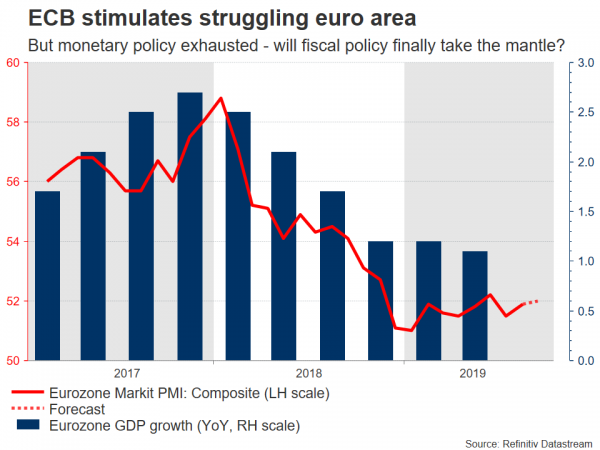 As for the euro, any sustainable recovery seems far away still, at least not while the data pulse remains so weak. The Eurozone is suffering from issues that monetary policy cannot effectively address – this is not a domestic liquidity or lending problem, but rather an external demand shock that is being felt mainly by the manufacturing sector. Hence, for the economy to bounce back, fiscal policy needs to take the wheel. Sadly, the only country with real fiscal space is Germany, and since Berlin doesn’t like to run deficits, the situation probably needs to get even worse before any meaningful fiscal stimulus arrives.

RBNZ to stand pat – can the kiwi get off the floor?

New Zealand’s economy continues to struggle too, with annual GDP growth for Q2 clocking in at the slowest pace in six years, as a collapse in business confidence restrains investment. The trade war and a deteriorating global outlook seem to be fueling this corporate pessimism, as New Zealand is heavily reliant on foreign markets to absorb its commodity exports.

The RBNZ has not been gun shy in the middle of all this, cutting rates by a half-point back in August to shore up confidence and stop this downward spiral in business sentiment from becoming self-fulfilling. No change in policy is expected this time, though markets still assign a ~20% chance that the central bank surprises again and cuts rates. 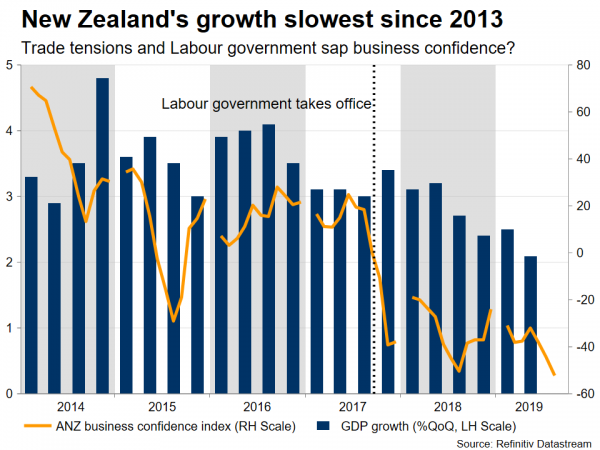 That is highly unlikely, as the RBNZ can afford to be patient and monitor trade developments before deciding whether to cut again. Hence, the kiwi could spike higher on the rate decision as the RBNZ disappoints those looking for an immediate cut. Overall though, the currency’s broader direction will hinge entirely on how the trade war plays out, so the October trade talks between the US and China may be crucial.

Over in the US, all eyes will be on economic releases, kicking off with the preliminary Markit PMIs for September on Monday. The data barrage intensifies on Friday, when personal income and spending numbers, the core PCE price index, and durable goods orders – all for August – will hit the markets at the same time.

While these figures are important, they are unlikely to be a game changer for Fed policy or the dollar. The Fed has been clear that it’s not cutting rates in response to domestic weakness, but rather as insurance that the trade war and a slowing global economy do not infect the US. Therefore, the bigger determinant for the greenback will be what happens between Washington and Beijing in October. Will the two sides strike a ‘limited’ deal as has been rumored and calm investors’ nerves, or will a lack of progress see the unpredictable US President fire another salvo of tariffs? 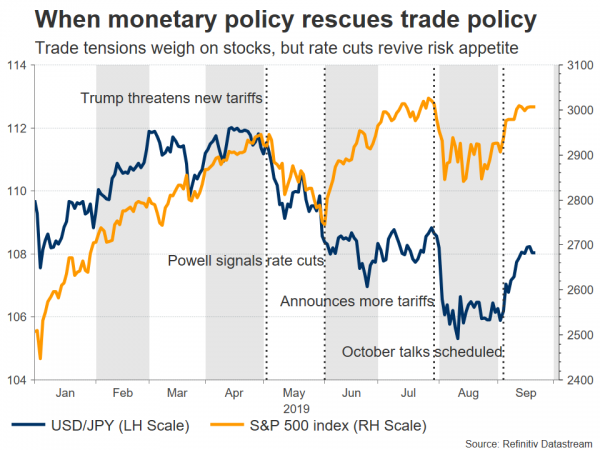 The latter scenario seems more likely, but it’s a close call. We have been here before, with the two sides striking an optimistic tone before talks, only for the situation to escalate again before long. Indeed, the two camps remain far apart on the biggest issues, like an enforcement mechanism for any deal and intellectual property rights, so it’s questionable how much real progress will ultimately be made. That said, market optimism could linger in the coming weeks before the talks take place, keeping riskier assets like stocks supported – at least in the absence of more geopolitical tensions.

There are also several speeches by key Fed officials throughout the week, including by New York Fed President Williams (Monday) and Vice Chairman Clarida (Thursday).

All eyes on the Middle East as tensions continue to boil

Beyond economics, the tense situation in the Middle East will remain at the fore. Oil prices have surrendered some of their gains lately as the US appeared reluctant to engage in a military conflict with Iran, with President Trump saying he would “like to avoid” war.

Overall, the situation is very fluid and unpredictable. An all-out military conflict still seems unlikely, considering that US involvement in another Middle East war would probably not sit well with Trump’s voting base. However, that doesn’t mean America will sit idle if there is another strike against Saudi Arabia, for example.

In another worrisome sign, the proxy war between Iran and Saudi Arabia in Yemen escalated earlier today, with the Saudi-led coalition launching a military offensive against Iran-backed targets, in what may be seen as backlash for the recent strikes on Saudi Arabia. Hence, tensions remain extremely high.

For the markets, this seems like a low-probability but high-impact risk. Any escalation could send oil prices soaring as concerns for supply disruptions intensify. Depending on the magnitude of any hostilities, global risk appetite could also be affected. For instance, a ‘limited strike’ against Tehran may not see much market reaction outside of oil prices, but if the situation morphs into an all-out war, then traders will likely increase their exposure to haven assets, such as the yen and gold.