Where are we at?

Risk sentiment by in large continues to ebb and flow at the mercy of US-China trade rhetoric. In October last month, the positivity or rather the lack of negativity (as we would suggest), saw equities – especially in the US – jump to all-time highs.

Our view is that while the near-term state of affairs appear brighter than in previous times, China could very easily stall till the pivotal US Presidential Election in 2020. In other words, trade policy uncertainty remains at large until a meaningful breakthrough can be found. A breakthrough beyond “phase 1” — which has so far failed to deliver on major sticking points and instead looks more like smoke and mirrors — would be needed, possibly in the form of a “phase 2” or “phase 3” deal.

Despite our longer-term view that China’s promises may eventually fall through the cracks, and the US could get agitated and impose further retaliation measures as a result, we’re well cognisant of the positive impact on markets trade rhetoric can have in the near-term. The fact that USDCNH has managed to trade below 7 for the first time since early August is an indication of just how optimistic things have been in recent times. 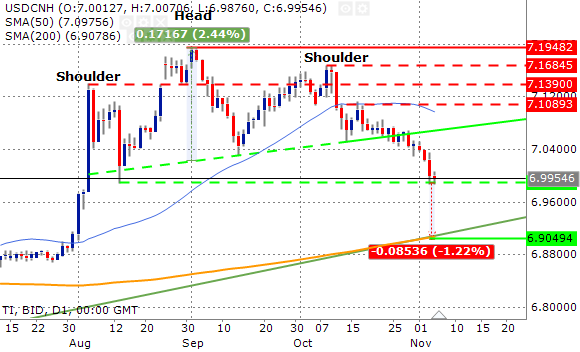 One of our predictions back a couple of weeks ago highlighted the idea that USDCNH could complete a head & shoulders formation if US-China trade headlines stayed on the straight. And so, evidently, not only has price action broken through the slanted H&S neckline in late October but is also now testing August 13’s low of 6.993. We think the next major test will be where the 200d-MA coincides with year-long trend resistance at 6.905 (-90pips from spot).

In the long-term US-China trade woes are likely to remain unresolved in our view mainly due to China’s reticence to meaningfully acquiesce on major structural issues like intellectual property and technology transfer. Details so far have been scant on what those two major sticking points will look like and whether they’ll be included in phase 1. The difficulty in creating and enforcing a dispute mechanism should bad behaviour emerge from either side is also expected to drive uncertainty. Furthermore, China have requested formerly imposed tariffs to be rolled back to some extent in order to push through “phase 1”; something we think the US Administration won’t cede to easily. 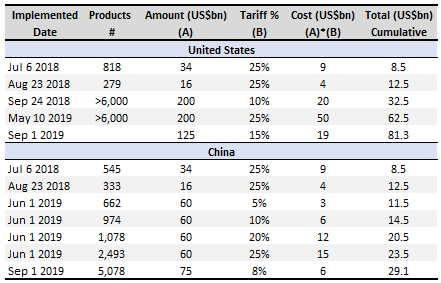 Interestingly, near-term upside risk in CNH is likely to translate to continued strength in AUDUSD. The confluence of local Aussie rate dynamics, technamentals and strong correlation to CNH means AUDUSD should be supported in the medium-term. From the chart below, we see AUDUSD and USDCNH inverted exhibit strong correlation with Q3 2019 in particular — a period which heavily focussed on US-China trade — tracing the peaks and troughs of price action quite well. This makes sense given the highly interrelated and dependent nature of the Chinese and Australian economies. If they win, we win. 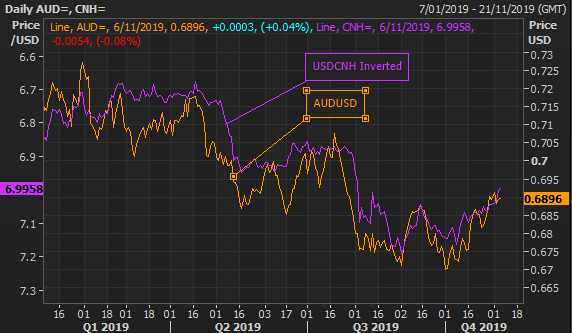