Looking to 11.30am AEDT we see NAB Business Confidence, a measure that tends to draw a mild reaction from AUDUSD however is still worth flagging as a window into whether the RBA’s accommodative monetary policy is flowing through to an improved outlook for Aussie businesses. September’s print of 0 puts confidence at multi-year lows. Markets will be looking for some improvement. Thursday’s Aussie jobs report still features as most significant.

Across the Tasman, traders catch NZ annual inflation expectations from business managers at 1pm AEDT. This will act as a prelude into Wednesday’s major central bank risk event for the week – the RBNZ’s November rate decision. In our three Monday talking points, we note the evenness of the call to fall either way at present.

Taking cues from the minor gain in Dec Futures overnight, we ought to expect a marginal rally at the open of ASX Cash though are very open to markets fading the move off the back of the weekend’s trade pushback, general toppy levels and broader HK unrest which saw Hang Seng Futures sell-off ~3% yesterday. Given Dec Futures also aren’t too far off all-time highs, we fancy some slight retracement into November trend support around 6,750-60 levels in the near-term. 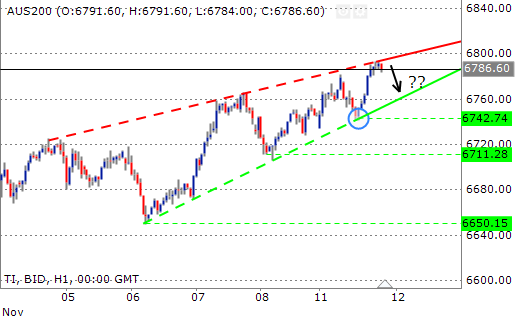 Sterling rallies but not on UK GDP

GBPUSD was the clear outperformer overnight having gained as much as +80pips to test 1.29 before retreating to 1.285. This was not however due to UK GDP (flagged yesterday) which somewhat allayed recession and growth fears cited by BoE’s Carney after printing largely around the mark, 0.3% vs 0.4% consensus. But rather, driven by election headlines suggesting the UK Brexit party won’t look to contest the Conservative majority ahead of the Dec. 12 election and will instead contest Labour seats. This aided bullish sentiment given it lowers the risk of a hung parliament and therefore No Deal.

We expect GBPUSD price action for the remainder of the week to remain sensitive to broader election headlines while also taking into account employment data due Tuesday 8.30pm AEDT and CPI figures Wednesday 8.30pm AEDT.