Labour market indicators will be watched out of Australia next week as the closely watched data could provide clues as to whether or not the Reserve Bank of Australia will lower rates again in the coming months. The quarterly wage price index is released on Wednesday at 0030 GMT and employment numbers will follow at the same time on Thursday. Although investors have priced out further aggressive easing, the RBA remains glum about wage and inflation prospects, leaving the door wide open to additional cuts. In the meantime, the Australian dollar is benefiting from the increased trade optimism to recover from 10-year lows.

RBA not confident on wage growth picking up

The RBA delivered a mixed assessment of the Australian economy last week in its quarterly Monetary Policy Statement (MPS): upbeat on growth, downbeat on inflation. While policymakers expect economic growth to gain momentum over the next couple of years, citing “a gentle turning point”, they are not convinced the projected rebound will be enough to push inflation higher. The Bank said in the MPS that wage growth is “no longer expected to pick up”. The somewhat more pessimistic-than-expected view signaled the RBA was ready to cut interest rates again to let the labour market run hot and generate upside pressure on wages.

However, despite the RBA’s clear inclination for more easing, investors have started to have second thoughts and have substantially scaled back their expectations of more rate cuts. The shift in expectations has lifted the Australian dollar by 3% from 10-year lows plumbed in early October.

Wages and employment figures to be uninspiring

The upcoming data may not do much in swaying traders either way as it’s not anticipated to alter the near-term picture on the labour market. The wage price index is forecast to have risen by 0.5% over the quarter in the three months to September and by 2.3% on a yearly basis. This would make it the third quarter in a row that wage growth has been stuck at 2.3%, and although this would hardly be encouraging for the RBA, neither would it be considered bad enough to prompt an urgent response, at least not just yet. 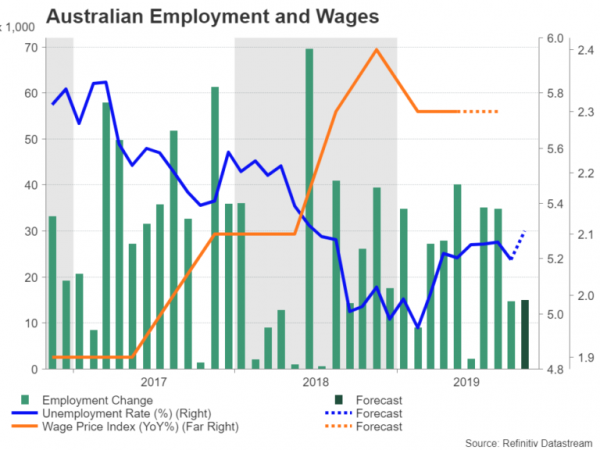 The employment report is also not expected to spur the RBA into immediate action, with jobs gains forecast to be maintained at a modest 15k in October, slightly higher than the previous month’s figure of 14.7k. However, the unemployment rate is forecast to inch up from 5.2% to 5.3%, which would suggest increased slack in the labour market and therefore keep the RBA firmly on the easing path.

A better-than-expected set of jobs data could halt the aussie’s retreat from the three-month peak of $0.6929 hit at the end of October and drive it back above the 50% Fibonacci retracement of the July-October downleg at $0.6875. A successful climb above this level would bring the October peak, which is also near the 61.8% Fibonacci of $0.6924, back within reach, with the next resistance coming from the 200-day moving average (MA) at $0.6944.

Will the RBA cut again?

The RBA kept policy unchanged at its November meeting and is expected to stand pat again in December. This turns the focus on next year, with investors pricing about a 69% probability of a 25-basis point rate reduction by the middle of next year. Should wage growth remain subdued and employment growth moderates further, another rate cut is highly likely, even if trade tensions were to subside further as the RBA has a mandate of achieving full employment in addition to price stability.

AUD/USD Flirts With The 70-Mark, What’s Next?