The coming week looks set to be unusually busy despite the US having a shorter week due to the Thanksgiving holiday. Nevertheless, the flurry of data may fail to generate much excitement. This could leave investors yet again exposed to the constantly changing sentiment on the trade outlook, especially if President Trump makes any references to the ongoing US-China talks in his Thanksgiving message. But in the absence of any fresh headlines on trade, the markets’ focus will mainly fall on US consumption and PCE inflation, Australian capital expenditure for Q3 and Canadian Q3 GDP figures.

The Australian dollar has managed to bounce back from the lows it brushed on the back of last week’s dismal employment report, but the renewed trade uncertainty has put a lid on further advances. Next week’s releases out of Australia and China could decide whether the aussie has additional upside left in the near term. First to watch is the third quarter estimate for construction work done on Wednesday. It will be followed by Q3 capital expenditure numbers on Thursday and private sector credit figures for October on Friday. 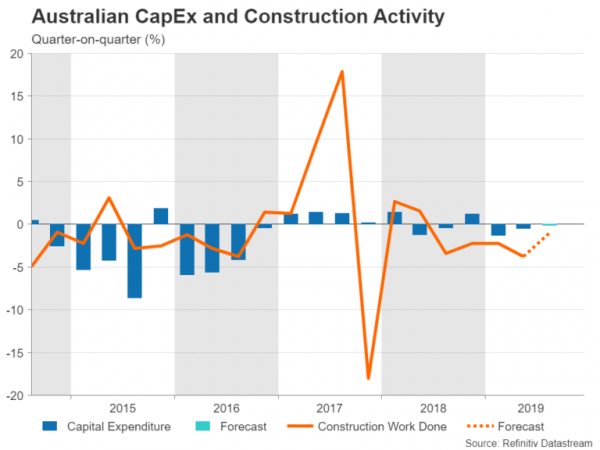 The construction and capex data will be scrutinized for evidence that the Australian economy has reached a “gentle turning point” as is being claimed by the Reserve Bank of Australia. But aussie traders will also be keeping an eye on China’s official manufacturing PMI due next Saturday, hoping that the manufacturing malaise is easing. The manufacturing PMI hit an 8-month low in October, as trade tensions continue to weigh on exporters. Any pickup in activity would be positive for the China-sensitive aussie.

The New Zealand dollar has been having a better time than its aussie cousin lately following the Reserve Bank of New Zealand’s surprise decision last week to refrain from cutting rates. Retail sales numbers for the third quarter due on Tuesday are likely to keep kiwi traders on their toes as any unexpected weakness in the incoming data could revive bets for further rate reductions by the RBNZ in the coming months, pulling the kiwi back down again.

In addition to the retail sales report, October trade figures on Wednesday and the ANZ business outlook survey for November on Thursday will be watched too for further clues on the health of the New Zealand economy and on the prospect of more easing by the RBNZ.

Japan hiked its sales tax rate from 8% to 10% on October 1 in what was the government’s latest effort to rein in public debt, which, as a percentage of GDP, is among the highest in advanced economies. Consumers front-loaded some of their spending in September ahead of the planned increase so some unwinding of that in October is being anticipated. The question is, did Japanese households sharply curb their spending in response to the sales tax hike like they did in 2014 when they tipped the economy into a recession, or did they merely cut back on the September splurge?

Hence, the October retail sales print on Thursday will likely attract more attention than usual. Also to come under investors’ radar next week are October jobs numbers on Friday, along with the preliminary estimate for industrial output. 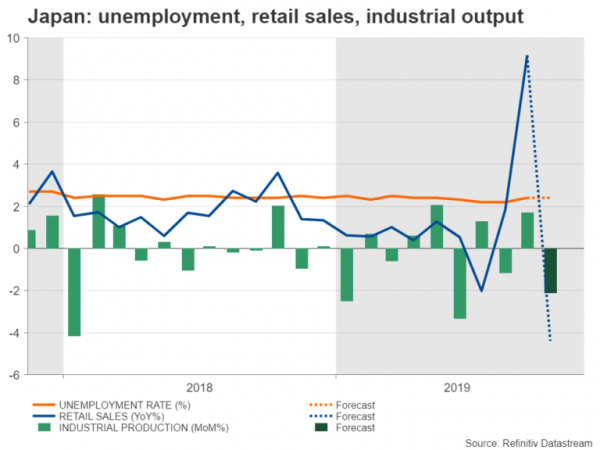 Although the yen tends to barely react to domestic releases, the world’s favourite safe-haven currency could take a tumble if there’s a shock plunge in retail sales as this would heighten expectations that the Bank of Japan will need to step in to provide additional stimulus to stave off a potential recession.

Business surveys to be Eurozone highlight

It’s going to be a fairly quiet week in Europe with no major releases out of the UK and just a handful of items on the agenda for the Eurozone. Starting the week on Monday will be the Ifo Business Climate index out of Germany. Recent business surveys for Germany and the Eurozone have provided some indication that the worst of the downturn may be over in the euro bloc, though they also suggest that a convincing rebound is far from near. Still, any further signs that growth is bottoming out could bolster the euro, particularly against the greenback, which has found itself caught in the midst of conflicting trade signals, a divided Fed and the threat of impeachment hanging over President Trump. 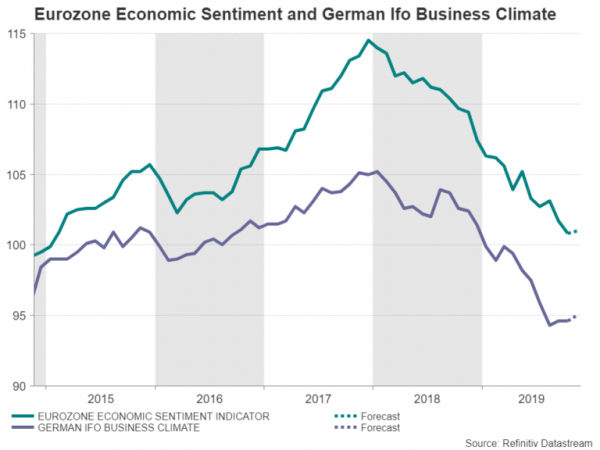 Traders will have to contend with more survey reports on Thursday when the European Commission publishes its economic sentiment indicator for the euro area. Lastly, on Friday, the flash reading of Eurozone inflation for November is due.

Canada will publish its GDP growth estimate for the second quarter on Friday and the data will be watched closely amid speculation the Bank of Canada could cut interest rates at one of its upcoming meetings. Having posted solid growth of 0.9% quarter-on-quarter in the three months to June, the Canadian economy is forecast to have slowed somewhat in the third quarter. A miss in the projections would fuel expectations of a rate cut sooner rather later.

Markets have currently priced in just a 9% chance of a rate reduction in December, but this rises to over 40% at the January meeting. Having unexpectedly shifted to a dovish stance at its last gathering in October, the BoC sent a mixed message when Governor Stephen Poloz used more neutral language in a speech this week, pushing the Canadian dollar higher.

However, the loonie’s newfound support in the C$1.33 region may not hold for long if next week’s GDP numbers disappoint as it would raise the odds of the BoC making an “insurance” rate cut early next year.

Packed but short week in the United States

The US market will be closed on Thursday for Thanksgiving Day and with both equity and bond markets shutting early on Friday, trading volumes are expected to be thinner than usual for much of the week. That’s not to say the week will be quiet as there will be plenty of releases to keep traders occupied.

First to come to the fore will be housing figures. The monthly home price index and the S&P CoreLogic Case-Shiller 20-City Composite are both out on Tuesday along with new home sales. Pending home sales will follow on Wednesday. The former two are for September, while the latter two are for October.

With some signs of a pickup in the housing market, better-than-expected numbers next week would signal that the Federal Reserve’s three rate cuts are starting to lift the sector, taking some of the pressure off policymakers to lower rates further.

Consumption will also fall under the spotlight next week. The Conference Board’s consumer confidence gauge is due on Tuesday and the Personal Income and Outlays report is out on Wednesday. The consumer confidence index is forecast to edge up 0.9 points to 126.8 in November, holding within its recent range.

Meanwhile, both personal income and consumption are expected to have risen by 0.3% month-on-month in October, pointing to healthy spending. Also included in Wednesday’s report is the Personal Consumption Expenditures (PCE) measure of inflation, which the Fed pays closer attention to than the consumer price index. Specifically, the core PCE price index is forecast to have increased at an annual rate of 1.7% in October, unchanged from the prior month. 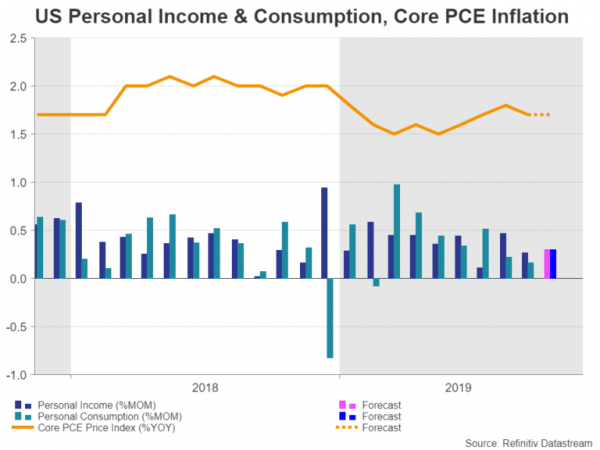 The barrage of data will not stop there as October durable goods orders and the second estimate of GDP growth in the third quarter are scheduled for release on Wednesday as well. No revision is expected to the preliminary reading of 1.9% annualized growth. Finally, the Chicago PMI will round up the week on Friday.

Although all the above numbers will be monitored carefully, they will likely simply reinforce the current view of the US economy, which is that it’s growing at a slower but satisfactory rate and may even be gaining some momentum with a little help from the Fed.

Is a trade deal getting nearer?

What may jolt the US dollar more than the data are new developments on the trade front. The latest press reports suggest US and Chinese negotiators have hit a stumbling block on the issue of rolling back existing tariffs but that an agreement is still within reach. Resistance by the Trump administration to give ground on removing some of the tariffs already in place could scupper a deal and throw markets into fresh turmoil so investors will remain highly sensitive to the flashing headlines.