Trade hopes were boosted by comments from the US and China earlier in the week, only to be stamped out after the signing of an American law that supports Hong Kong autonomy was criticized by China bowing retaliation. The prolonged trade war has been a drag on global growth and with the December 15 deadline for a new round of tariffs it’s unclear if even a limited phase one deal can be achieved this year. President Trump will be in London for a NATO meeting with an eye on China’s backlash.

European green shoots this week could be signalling the start of the recovery, but PMIs this week will paint a broader picture as manufacturing could be a victim of trade protectionism. UK election campaigns continue as the December 12 vote approaches with Boris Johnson on top of the polls for a majority. The pound has been stronger this week as political uncertainty is reduced, but with Brexit looming the headwinds for the currency will rise next year.

The central banks of Australia and Canada make an appearance, but they are expected to keep their rates unchanged to wrap up the year. Lower for longer is still the norm as long as inflation pressures remain soft with economic growth stagnant.

OPEC and other major producers will meet this week. An extension of their production limit is in the cards, but as Russia hesitates on prolonging the supply cut Saudi Arabia is now said to be scaling back on helping other members meet their quotas. Saudi Aramco’s IPO will be priced this week, giving an extra incentive to the kingdom to keep the agreement in place to stabilize crude prices.

The dollar is trading higher after trade uncertainty has supported the greenback. The optimism around a phase 1 deal seems unlikely after the signing of the US law backing Hong Kong autonomy. Chinese retaliation is subject to speculation ahead of the December 15 deadline for the new round of tariffs. Strong economic indicators could keep the Fed on the sidelines for December and hold the benchmark interest rate unchanged. 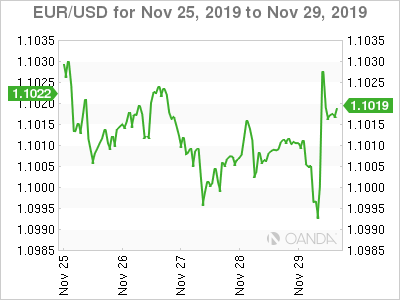 A trade deal breakthrough would boost risk appetite and weaken the US dollar. All eyes are on China for signs of countermeasures as President Trump will be busy with a trip to London

The pound is trading close to the 1.29 price level to end the week with most investors eyeing the political campaign and the eventual elections on December 12. The results from the YouGov poll putting the conservative party in the driving seat had eased uncertainty. A majority not seen since 1987 could be a lofty goal, but for now it seems within the reach of Boris Johnson. 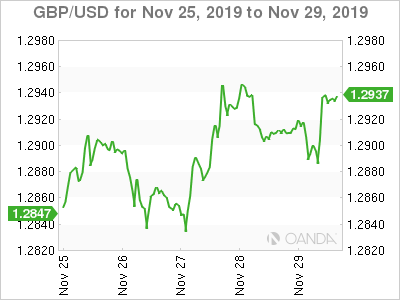 Political risk is high given the stakes of the election, but Labour has not capitalized on Brexit anxiety and is on course for a second place finish.

Oil prices have been in a holding pattern as conflicting trade headlines have offered little support and there is a similar scenario playing out between the OPEC and Russia on when and if to decide on an extension to the production cut agreement. Big week for oil coming up with the Saudi Aramco IPO and the meeting between OPEC and other major producers. 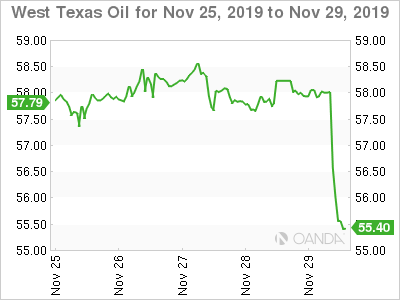 Russia has not committed to an extension and is pleading to other producers to reach a decision next year. A lack of agreement during the December meeting would put downward pressure on crude prices and with no positive trade news demand projections continue to fall.

Gold had its worst monthly performance in three years this November. The metal fell of its $1,500 perch to levels around $1,461.97 as the trade war tensions eased, Brexit fears were replaced with what appear to be one sided elections and investors sold their gold positions. Appetite for a safe haven was low, and even the dollar offered more protection as the Fed is on hold and economic indicators favor the US economy.

China has yet to respond to the signing of the US law backing the Hong Kong democratic movement, but the US-China trade negotiations appear to be an obvious target. 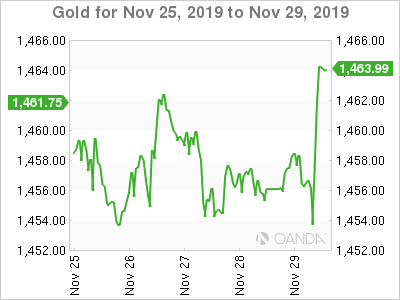 Gold has been boosted by safe haven appetite. The latest US-China disagreement has not yet resulted in retaliation from China. A more combative response will put in jeopardy the already tenuous possibility of the phase one deal being signed this year. On the other hand, a more diplomatic response that could pave the way for a deal before the December 15 could further depreciate the yellow stuff to end the year

The polls this week have shown the gap between the Conservatives and Labour narrowing, with one poll from ICM showing it falling as low as seven points. This hasn’t rocked the boat too much as far as the pound is concerned, although it did slip a little. It remains range-bound between 1.28 and 1.30 and a pre-election breakout looks unlikely unless things dramatically shift. In this political environment though, particularly heading into arguably the most unpredictable election in decades, nothing is certain. It only takes one clanger on either side to significantly change the polls, even towards a Conservative victory without a majority, and both sides are more than capable of this.

Talks are ongoing as the Socialists, backed by Podemos, look to secure majority support in Parliament. The ERC – the largest separatist party in Catalonia – has voted to support the government but further support will be required in order to hit the 176 seat threshold. That will come at a price though, likely being the release of jailed leaders, following the independence push a couple of years ago, and a legal independence referendum. There’s still a long way to go on this one.

There were huge win for pro-democracy groups at last weekend’s election, but more to the point it was peaceful. Many doubts it will change China’s stance to the protests in HK, though Carrie Lam says she will take note. China accuses US of meddling in HK affairs, protests the passing of the HK Democracy Bill. Retail sales data due on Monday is unlikely to be inspiring, given the disruptions by the protests. 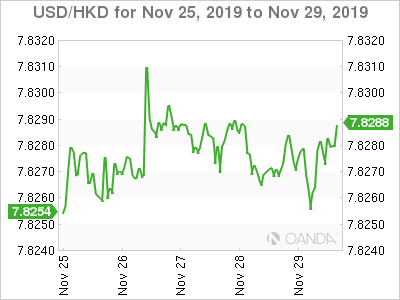 It’s been quiet after the election, but the weekend could bring fresh protests if China is seen to be ignoring, or not reacting, to the outcome. Depending on any violence, and the intensity of it, USD/HKD could edge back to the upper end of the trading band, but the risk of the peg breaking remains at zero. The HK33 index could extend its slide from Tuesday’s high.

Trade negotiations remain the game in town with verbals from both sides suggesting a deal is “close”. Trump’s signing of the HK Democracy Bill into law has upset China, and they’ve threatened “retaliation”. There has been no hint of what these retaliations might be, yet. If it involves Phase 1 negotiations then there’s likely to be a big risk-off reaction, hitting Wall Street, China shares, USD/CNH and risk-beta currencies like the Aussie. China’s PMI data for November are released this Saturday and will set the tone for trading for the start of next week. 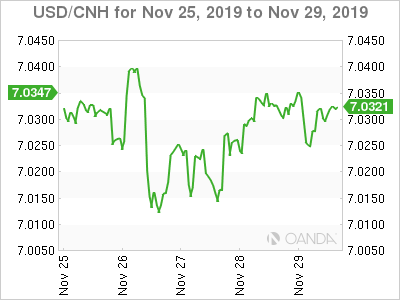 If China pulls back on trade negotiations, or the PMI data disappoints, Mainland and APAC stock markets and currencies will probably head sharply lower.

The main event for next week is the RBI meeting on Thursday, where they’re widely  expected to trim the repo rate by 25 bps to 4.90%. This would be the sixth cut in consecutive meetings suggesting the RBI is concerned about the Indian economy’s trajectory. No cut would hurt the IN50 index and push USD/INR lower

Still focused on the US-China trade negotiations. The RBA meeting on Tuesday will be a sideshow, with the RBA already saying they’re on wait-and-see mode. 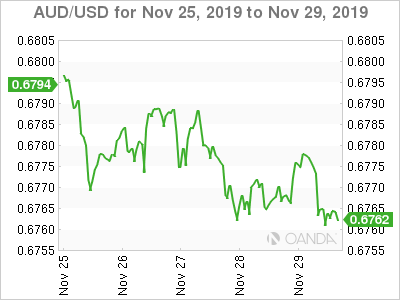 Still focused on the US-China trade negotiations. The RBA meeting on Tuesday will be a sideshow, with the RBA already saying they’re on wait-and-see mode.

Any change in the status of trade negotiations would be detrimental to local equities and the AUD. Any discussion on QE at the RBA meeting could hurt the local dollar.

The Mexican peso has been under pressure on the trade front. The US-China negotiations keep dragging global growth lower and keep risk appetite down. The USMCA ratification is moving at a slow pace as democrats debate labor provisions. The biggest risk for the NAFTA replacement is to go into next year without being ratified opening it up to be weaponized in the US presidential elections. NAFTA is still applicable but keeping the USMCA off the table during what is gearing up to be an ugly campaign would be beneficial for the Mexican economy and its currency. 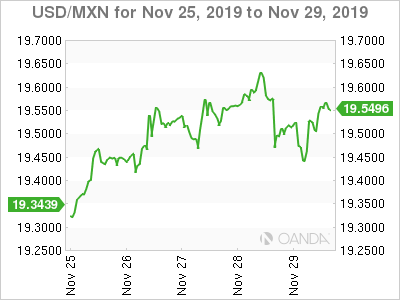 The peso has avoided sharing the fate of other LatAm currencies which touched record lows versus the dollar this week. A good reason for this is the Mexican benchmark interest rate stands at 7.50% and Mexico’s political landscape is more stable making a carry trade attractive even as the central bank is due for another rate cut before the end of the year.

Contagion risks exists as protest movements in Chile, Ecuador, Bolivia, Venezuela and now Colombia have already put Brazil on alert. Mexico is not fully immune, but for now trade news will have a more direct impact.

Calendar of Major Events for the first week of December:

Aussie and Kiwi Down on Easing Expectations, Dollar and Yen Firm