Iron ore pushed higher through the first half of 2019, hitting a peak of US$126 in July due to the Vale Brumadinho mine disaster. However, from August a recovery in supply, and softer demand from China, took prices back down to, and briefly below, US$80/t in November. Prices have since drifted higher to just above US$90/t in the last few weeks.

Westpac is forecasting iron ore to hold around current levels through to mid-2020 when a lift in supply, and slower demand, will push prices back down to US$65/t by year end.

There are a number of observations pointing to a normalisation of the Chinese iron ore market post the Brumadinho disaster and the 2018 surge in steel production. From the supply side:

Australian iron ore exports have fully normalised from the weather/ one off shocks seen late last year/ early this year. On the basis of our high frequency shipping model, Australian exports in November were 72mt, up 9%yy and 2.8%3myy. That will bring the total for year to date exports to 760mt, versus 761mt for the same period last year. 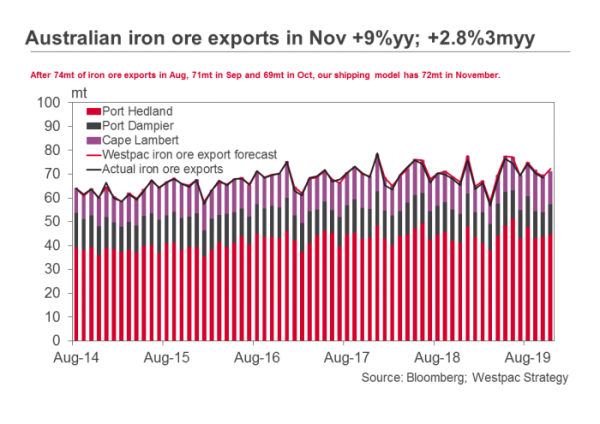 However, when we include Brazilian exports, the picture changes. Brazilian iron ore exports are down 18%3myy November and combined Australian and Brazilian exports are 54mt below the level seen in the year so far to November versus the same period a year ago. Further, that deficit has been increasing over the last 4 months confirming that the global supply deficit has, if anything, been increasing as we have moved from Q3 into Q4. 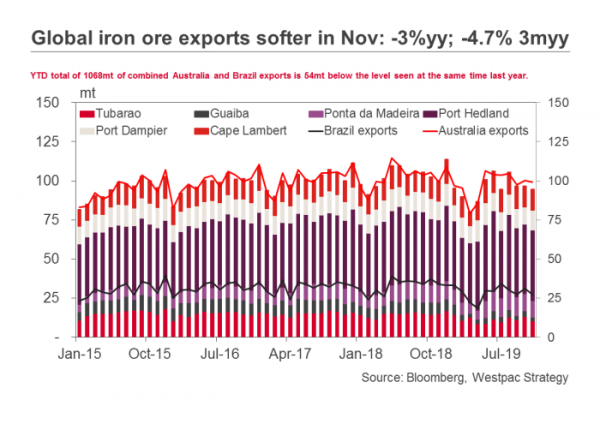 However, Brazilian ore imports into China set a new record of 24mt (up 9.4%yr) in October suggesting supply has been diverted from other markets. Inventories of Brazilian ore have grown 23% from the July low. By comparison Chinese imports of Australian ore are yet to return to the September 2017 high of 65.1mt and are flat in the year. Australian port inventories of ore have grown 21% since July while total ore imports are up 5.1%yr and total ore inventories have lifted 8.5% from July. 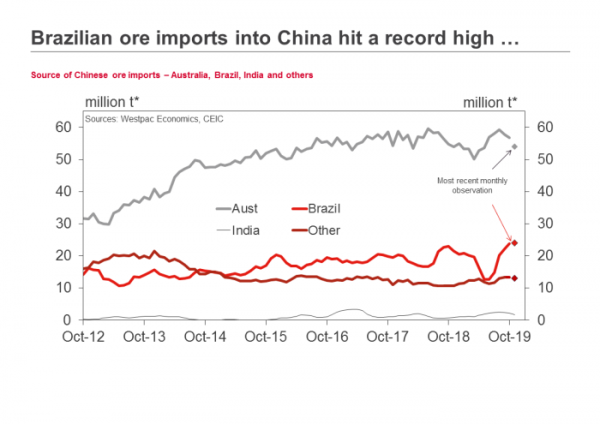 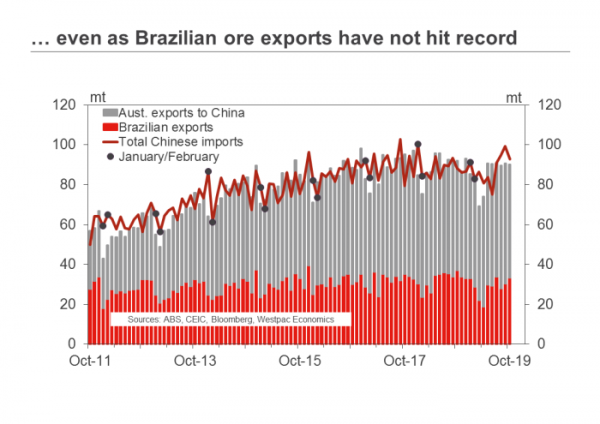 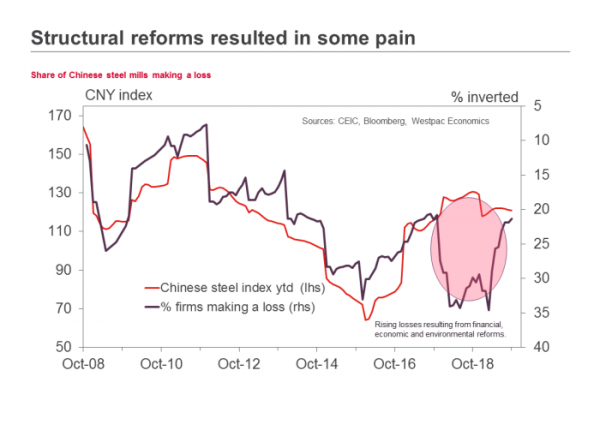 Too early to turn bearish?

There are a number of demand side observations suggesting it is too early to turn bearish on iron ore prices. These include:

The softening trend in Chinese rebar prices continued through 2019. Nevertheless the restructuring of the industry was effective with steel mill margins remaining well supported allowing steel mills to focus on efficiency and environmental outcomes, rather than being forced to use cheaper inputs. This supported the premium for higher grades of ore and scrap steel while Chinese steel mill margins remain high relative to recent history, at around 4%. 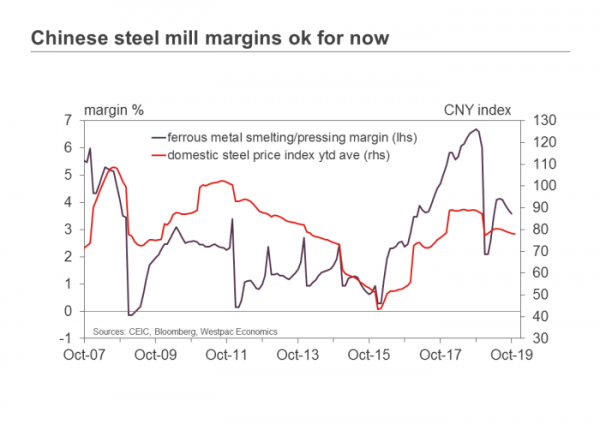 The pace of growth in Chinese dwelling starts peaked in August 2018 and has been in a moderating trend since. As such we are not surprised the annual pace of steel production flattened in October (0%yr from a very robust 15%yr at the start of the year). In addition, the share of loss-making steel mills is back down to 20% suggesting the administration has eased the pressure on the industry to force structural reform – reforms that are supportive of positive industry margins. 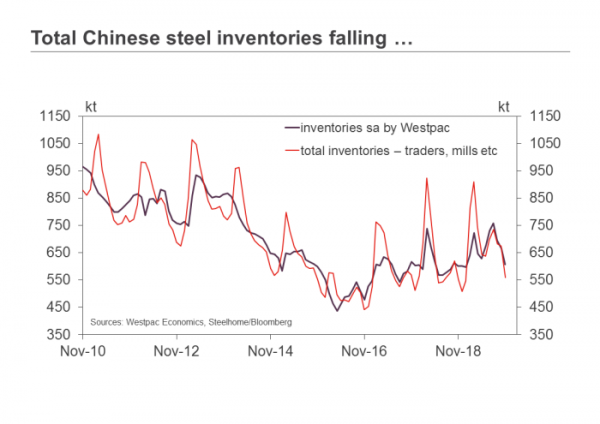 We are not expecting a meaningful correction in steel production in 2020. Steel inventories have unwound the earlier build-up and are holding a cycle low. With growth in sales still outpacing the growth in inventories, it appears that demand is holding up better than anticipated. We expect Chinese steel production to flatten rather than stall, and are forecasting a 2% lift in 2020. 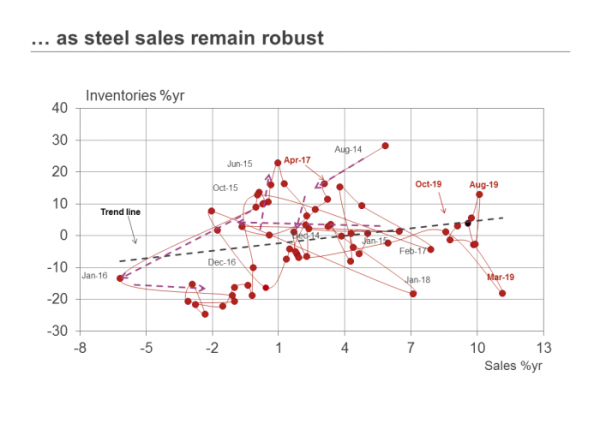 There are also signs that infrastructure expenditure may be being brought forward from 2020. The Chinese authorities last month said they would allow local governments to issue RMB1tn in special purpose bonds before the end of the year that would accelerate/ use up funding from 2020 quotas.

While we are yet to see physical evidence of an impact from the bring forward of infrastructure in industrial activity data, there are a number of price points that suggest this is happening including the fact that the average price of cement in large cities has picked up 15% since September, the price of rebar has risen 12% over the same period while aggregate price has risen by 10% since the end of the 3rd quarter (source FT/ Wind). 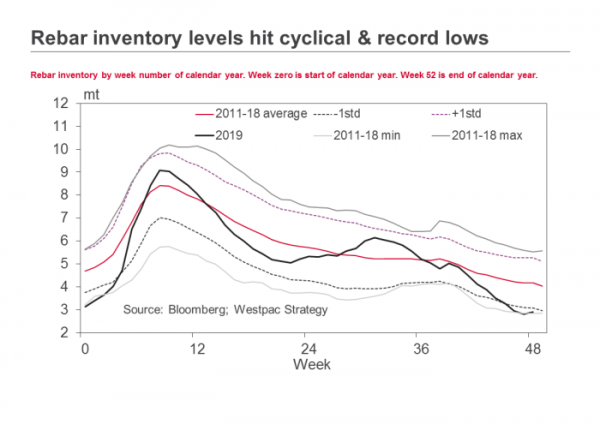 Consistent with the above is the sharp drop in rebar inventory to cyclical/ historic lows even as rebar production has held close to record levels which would suggest that domestic consumption of steel used in construction is unusually high for this time of year. 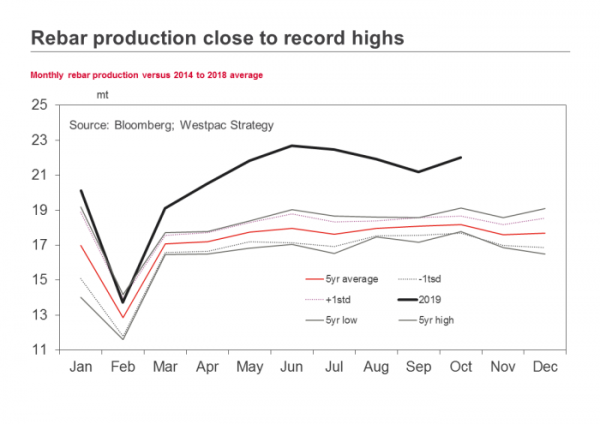 Bottom line, while iron ore supply has partly normalised, will continue doing so, and slower demand will weigh on prices in 2020, there are a number of demand side observations suggesting it is too early to turn bearish on iron ore prices.

Hence our forecast of iron ore to hold around current levels through to mid-2020 when that lift in supply, and slower demand, will push prices back down to US$65/t by year end.