What a way to end the week. News of a potential phase one trade deal sent markets on a near-vertical climb. The S&P 500 hit a record-high upon digesting the news but fell back when more details emerged. For the week, it was up 0.8% at the time of writing.

Details of the deal are still to come, but the Office of the United Stated Trade Representative stated that the U.S. will reduce tariffs from 15% to 7.5% on $120 billion of Chinese imports and cancel the tariffs that were to be imposed on December 15th. In exchange, China will substantially increase its imports of U.S. goods and services. We do not have any official figures on this, however. It is quite possible, that this “deal” is a head fake.

For the time being, with tariffs on Chinese consumer goods now off the table, U.S. retailers will be breathing sighs of relief, especially as retail sales growth has been slowing recently (Chart 1). Indeed, November data, released today, showed retail sales advanced by a soft 0.2% on a month-on-month basis. While spending on goods took a step down, consumption in services was buoyant in the third quarter. The Quarterly Services Survey had revenues in the services sector growing by 5.8% annualized. Overall, these data imply that consumption continues to drive the U.S. economy forward.

Even with all the vibrancy in spending, price pressures are muted. Consumer price inflation in November increased to 2.1% year-on-year from 1.8% in October, but this was mainly due to energy prices. Stripping out energy and food prices, core price inflation remained steady at 2.3%. Past tariffs, too, appear to be not have been fully passed through to consumers. This can be attributed to U.S. retailers absorbing higher prices, as well as a rising U.S. dollar (Chart 2).

Taking stock of the developments for the week, the Fed will be more than comfortable with their decision to take their foot off the pedal on Wednesday. Consumption remains robust, inflation pressures are muted, and past interest rate cuts are still working their way through the economy. On top of this, global uncertainty could be abating. Specifically, surrounding Brexit.

The Conservative Party won a resounding majority in the United Kingdom election. With this result in hand, Prime Minister Boris Johnson should be able to lead the country out of the EU. Anticipating this outcome, the pound appreciated, and UK bond yields moved higher. But leaving the EU is only the first hurdle. Next on the agenda is for the parties to agree on a trade deal. This will likely lead to a messier second chapter of the Brexit saga.

The end game on Brexit and the China-U.S. trade war remains uncertain. Even what seems like progress towards unwinding uncertainty, reveals more uncertainty. This will continue to be one of the key forces influencing the global outlook in 2020. 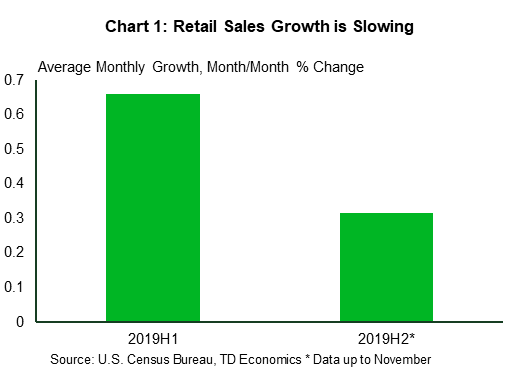 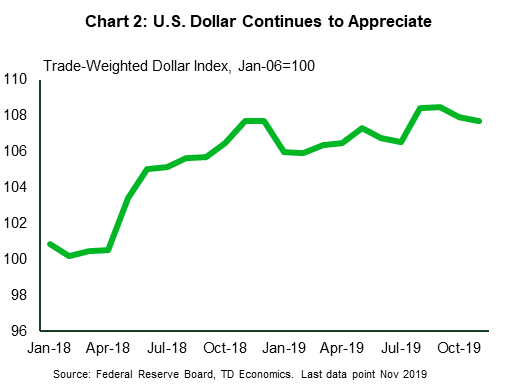 Canada – Hooray, Hooray, CUSMA (Should Be) Here To Stay

It may feel like events beyond our borders sucked all the oxygen out of the news cycle this week, but while the resounding Conservative victory in the U.K. and rumours of a U.S.-China phase one deal may have gotten a lot of attention, lots was happening here as well. Kicking things off were the November housing starts, which edged a bit higher month-on-month to a 201.3k annualized pace (Chart 1). The details were decent. Indeed, the slight downtick of late aside, the fundamentals for the sector are healthy and it should remain an important source of economic growth.

This morning brought the latest update on the state of household finances. Echoing the revisions they made with the most recent GDP report, Statistics Canada has marked up their estimate of household incomes, leading to a lower than previously thought debt-to-income ratio. This was ‘just’ 175.9% (i.e. $1.76 owed for every dollar in disposable income), rather than the previously reported 177.1%. The cost of servicing this debt continued to climb, hitting an all-time high in the third quarter (Chart 2). The sharp climb in these costs goes a long way in explaining rising household insolvencies, but lower rates this year should provide a bit of relief.

Away from the data, the trade development with the biggest direct impact on Canada was the announcement that the “new NAFTA” trade deal (Canada-U.S.-Mexico Agreement, or CUSMA north of the border) had received the final tweaks needed for ratification by all three countries. It is hard to find much to quibble with in the changes, which were generally minor, including provisions to ensure functional dispute panels, reduced protections for certain classes of drugs, and new approaches to ensuring labour provision compliance by Mexico. While Canada may be working to diversify the sources of trade, CUSMA partners nevertheless represent more than 75% of our trade in goods, so getting within inches of locking the new deal in (recent indications suggest it could be passed in the U.S. early next year) is a good thing. Moreover, the deal should provide at least some modest support to Canadian manufacturers who, as we noted this week, have so far avoided the slowdown seen elsewhere.

Other trade headlines, notably the apparent U.S.-China ‘phase one’ deal, may have distracted from Bank of Canada Governor Poloz’s final speech of the year. It is perhaps just as well. The Governor was very careful not to say anything new in his prepared remarks, focusing instead on the key areas of focus for the Bank in 2020. This isn’t a big surprise: what more could he add only a week after his Deputy Governor covered the factors that drove their last interest rate decision? But, as careful as the Governor was in keeping his speech neutral, he seemed a tinge more hawkish during his media availability. Asked about last week’s dismal jobs numbers, the Governor focused instead on the longer-term trends, characterizing the labour market as being in a ‘nice spot’. He also suggested that global growth is ‘bottoming out’. His closing message of the year seems to be that it will take more than a bump or two to get the Bank of Canada to move rates lower. 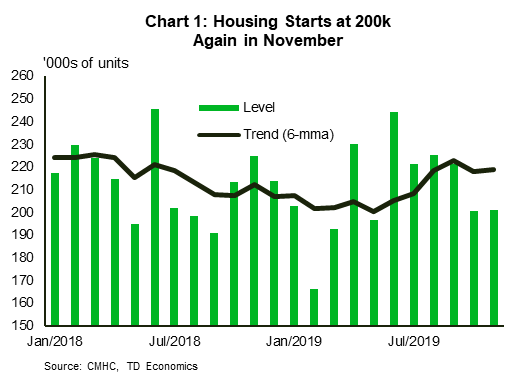 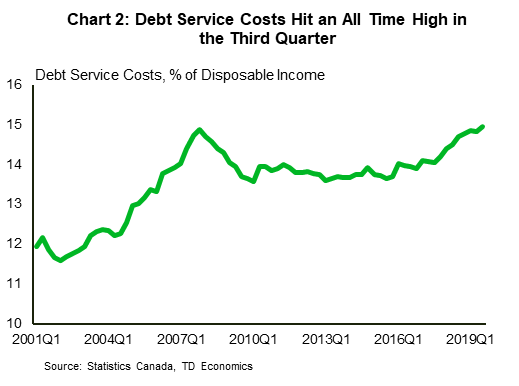 The key core PCE price index probably rose just 0.1% in November, lowering the 12-month change to 1.5% from 1.6% in October. Base effects should help boost the 12-month change again in Q1, but for now the pace is moving away from the Fed’s 2% goal. We expect the headline PCE price index to be up 0.2% m/m, lifting the 12-month change to a still-low 1.4% from 1.3%. Separately, we anticipate personal spending to advance a firm 0.4% in November, marking its strongest monthly increase in four months. Despite that, the November print should continue to indicate household spending is moderating in Q4. Lastly, we forecast income growth to rebound at 0.3% m/m, following a flat print in October. 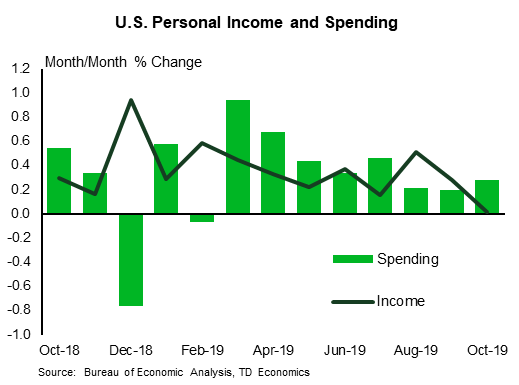 TD looks for a muted 0.1% increase in manufacturing shipments for October as a large drag from motor vehicles offsets strength elsewhere. Motor vehicle production fell sharply in October and auto part exports fell by nearly 12% on the month as Canadian plants felt the impact of the UAW strike in the US. Elsewhere, higher petroleum prices will provide a tailwind to nominal refinery sales while a sharp increase in exports of chemical products suggests another source of strength. Forest products should weigh on the headline print along with motor vehicles, owing to ongoing weakness at Canadian lumber mills, while real manufacturing sales should match the nominal increase with factory prices largely unchanged. 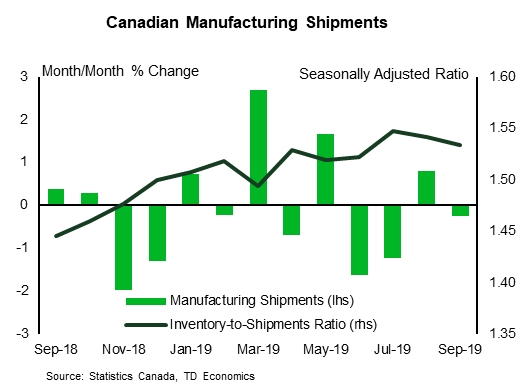 CPI inflation is projected to firm to 2.2% y/y in November owing to a significant tailwind from base-effects, with prices down 0.1% m/m. Energy prices are the main catalyst for the month-over-month decline, as a change from summer to winter gasoline blends weighs on the price at the pump. While this is typical for Q4, last November saw a much sharper pullback in gasoline prices due to softer crude oil prices, and the base effects from this move should eliminate a 0.2pp drag from gasoline on a year-ago basis. Elsewhere, food prices should make a positive contribution on higher crop prices alongside a modest pullback in the Canadian dollar, while shelter should provide another tailwind as the housing market recovery feeds into higher homeowner replacement costs. Muted base-effects to CPI-trim and CPI-median suggest a high hurdle to any pullback in core CPI, which should leave the average of the three near 2.1% y/y and allow the BoC some patience as they monitor incoming activity data for signs of slowdown. 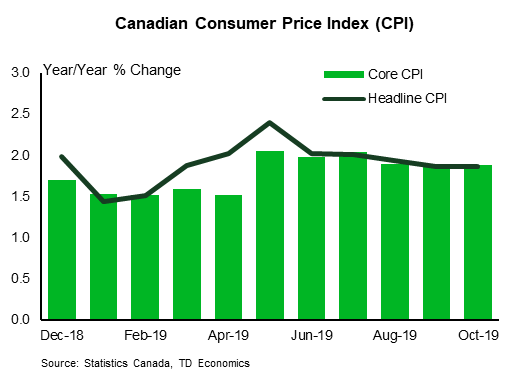 Retail sales are forecast to rise by 0.5% in October on stronger auto sales and a 0.3% increase in the ex-autos measure. Preliminary motor vehicle sales saw a sharp increase for October, helped by unseasonably warm weather, which indicates a full rebound of the drop observed last month. Elsewhere, higher gasoline prices will flatter nominal sales at the pump while a solid increase in hours worked bodes well for the retail sector as a whole. Real retail sales should match the nominal increase, reflecting little change to consumer goods prices, which should help anchor Q4 consumption after a disappointing (-0.1%) handoff from September. 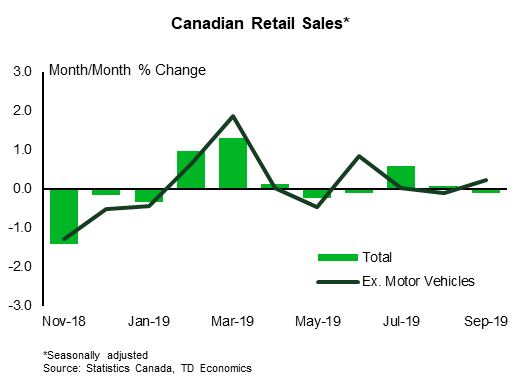