It’s only the third week of 2020, and its already proving to be a busy year. This week was a whirlwind, with oodles of data releases and, of course, the signing of the long-awaited phase one trade deal.

From a data perspective, 2019 ended with more of the same for the U.S. economy. Consumption likely remained solid in the fourth quarter, as evidenced by the healthy rise in retail sales in December. Retail sales advanced by 0.3% month-on-month, and November’s figure was also revised higher. There were gains in nearly every category, underlining the robust nature of the increase.

The housing market also continued its good run, with housing starts surging last month. Construction in both singles and multifamily units picked up in December, sending the overall level to its highest point in 13 years (Chart 1). Taking together, housing data for the fourth quarter implies that residential investment is on track to continue its upward climb heading into 2020.

On the flipside, we saw the NFIB’s small business optimism index move in the other direction in December. The decline is likely attributable to heightened policy uncertainty, a theme that has plagued businesses, big and small, throughout 2019 (see report).

On the whole, we expect the U.S. economy to have ended 2019 on solid footing. The final Beige Book of the year supported this narrative, showing a decent rise in economic activity and tight labor markets across Federal Reserve districts.

Despite the increasing pressure on economic capacity, inflation remains stubbornly soft. December’s core consumer price index, which strips out the impact of energy and food prices, remained at 2.3% year-over-year, unchanged since October. On an annual basis, core CPI inflation was only a tick higher in 2019 at 2.2%. Looking ahead, price pressures may continue to be subdued especially with the U.S.-China phase one trade deal effectively cutting the existing tariff rate, while also removing the threat of additional tariffs at least for the time being.

This takes us to the big headline for the week, the U.S.-China phase one trade deal. On the face of it, the agreement could be a positive for U.S. growth as it commits China to purchasing an additional $200 billion worth of U.S. goods and services over the next two years (see commentary). But the big question is: can China adequately ramp up its imports to reach this target? The answer is probably not. Quarterly import growth would have to average above 10% for every quarter from now until the fourth quarter of 2021 to reach this goal (Chart 2).

The agreement also included a dispute mechanism. In the event China doesn’t meet its import commitments, the U.S. can resort back to imposing tariffs and if China responds, the deal would be nullified. Indeed, the agreement gives short-term relief, but its sustainability is still an open question. 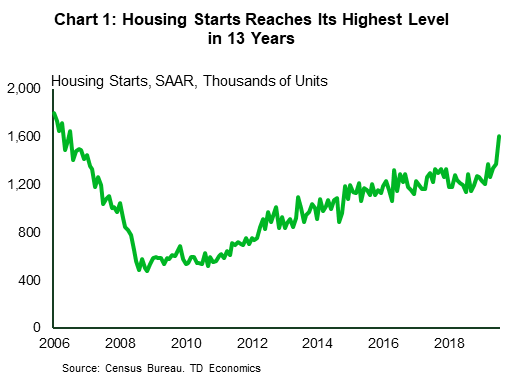 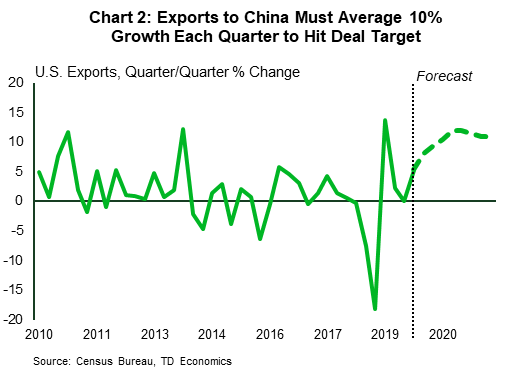 Trade deals were front and center this week. First up was the official signing of the U.S.-China ‘Phase One’ trade dea. Bringing a modest reduction in U.S. tariffs and Chinese commitments to significantly ramp up purchases of U.S. goods and services, the deal closes off a period of uncertainty. But, particularly from a Canadian perspective, there remains lots to worry about. First, this is hardly the end of the story. Tariffs remain in place and how binding the agreement turns out to be is yet to be seen – there are a decent number of ‘off-ramps’ written in for both sides. Secondly, should the targets be realized, there could be negative spill-over effects for Canada (and others) as China refocuses its imports on U.S. producers, particularly when it comes to agricultural products. Equilibrium effects should help (i.e. non-Chinese demand will need to be satisfied by new sources), but adjustment costs should not be ignored.

More encouraging was the Senate passing USMCA (the ‘new-NAFTA’) on Thursday, paving the way for President Trump to sign it into law. Canadian passage should presumably not be far behind. This agreement, which is by and large an echo of NAFTA with some tweaks, does not do much to alter the economic outlook (see our 2018 commentary – the amount of time between the agreement in principal and the signing into law is notable). But, it is still a positive, providing an additional degree of certainty for Canadian exporters.

In terms of domestic developments, things were fairly encouraging. The Bank of Canada’s quarterly Business Outlook Survey was a solidly middle-of-the-road affair (see our earlier thoughts). The summary indicator rose modestly, and although the outlooks for sales and investment came down a bit, they remained in positive territory (Chart 1). Why call such a report encouraging? The higher frequency economic data has taken a decidedly negative tone of late, suggesting some risk that there may be a deeper issue emerging than the known headwinds (strikes and pipeline disruptions). The staid outlook among large firms may not be pointing to a surge of growth, but neither does it suggest a prolonged underperformance. Consistent with a return to trend-like growth next year, we’ll take the survey results as a win.

We also got the final read on 2019 Canadian resale housing markets (details of the December data can be found in our commentary). There were two related themes in the December data that echo 2019 more broadly. First, the pace of sales activity has slowed following solid gains earlier in the year, while average prices have continued to heat up, particularly in Ontario. The factor linking these trends has been listings growth failing to keep up with the pace of sales, leaving about four months’ available inventory nationally as of last month, with less than two months’ supply in Ontario – a level last seen around early 2017 (Chart 2). That period is of course associated with heady price gains (quickly ended by macroprudential policy, notably Ontario’s ‘Fair Housing Plan’). The lack of supply has been constraining sales (can’t buy a house if it isn’t listed), sending many markets well into sellers’ territory. There is however, a saying in economics: ‘the cure for high prices is high prices’ – meaning that strong price gains incent supply, helping cool price growth and support the level of sales. The adjustments take time; expect to see some decent price gains in the near term. 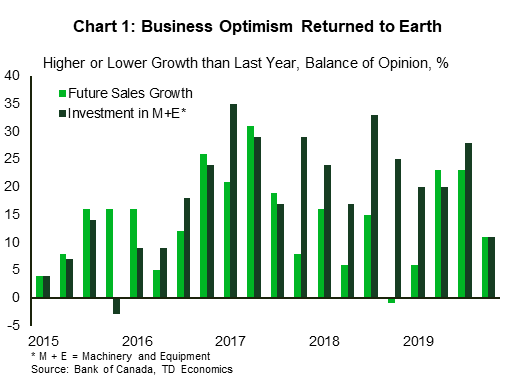 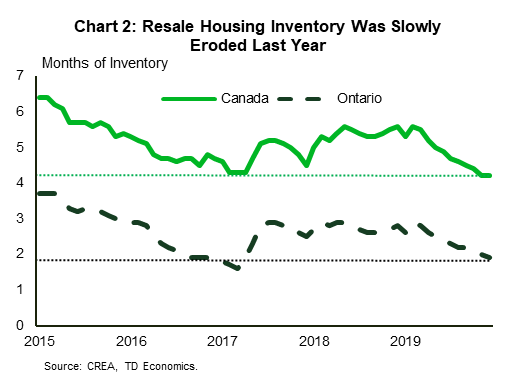 Manufacturing sales are forecast to edge lower by 0.2% in November as a partial rebound in auto shipments proves insufficient to offset a broader decline in manufacturing activity. Preliminary auto production showed a modest rebound in November after the UAW strike led to inventory shortages across Canada, although the scheduled winddown of a major plant has weighed on the recovery. Elsewhere, fabricated metals should bounce back after their largest one-month drop since 2008, although exports and labour market data point to a broader pullback in manufacturing shipments. Real manufacturing sales should perform in line with the nominal print owing to unchanged factory prices during the month. 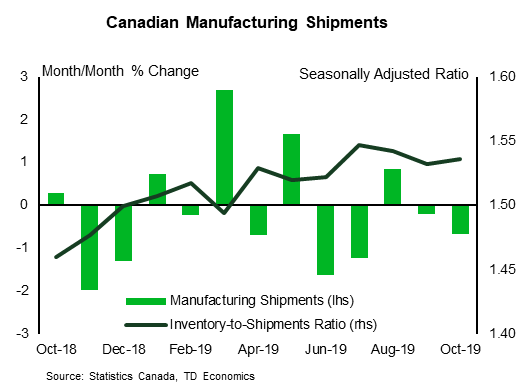 We look for the BoC to leave rates unchanged at 1.75% in January where the policy statement and MPR will be monitored for signs of a pivot away from the Bank’s cautious optimism on the outlook. Despite the recent deterioration in GDP tracking, upbeat business sentiment and a stabilization in the labour market give the BoC some leeway to maintain its recent messaging and leave GDP projections unchanged. Furthermore, global trade tensions have receded since October, which could result in a hawkish tone. While we can acknowledge that the global backdrop has improved from the October MPR, we remain skeptical that the Bank will be able to withstand much more of a deterioration in domestic conditions and continue to look for a 25bp cut in April. 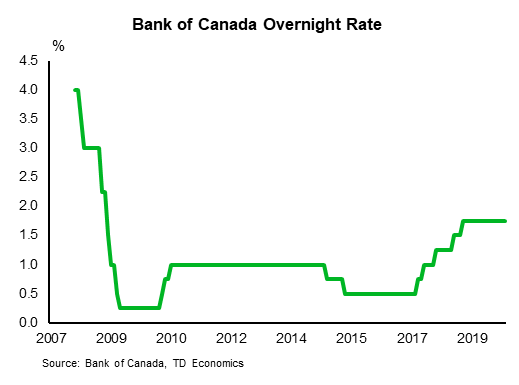 TD looks for headline CPI inflation to hold steady at 2.2% y/y in December, with prices unchanged on the month. Energy prices should provide a key contribution to the year-ago print owing to base-effects from 2018 when gasoline prices fell by 6.5% m/m; gasoline prices should remain relatively stable this December which will see the y/y contribution from energy rise by roughly 0.2pp. Offsetting this is a smaller lift from food prices on a year-ago basis, along with a more modest contribution from the core owing to a surge in airfares last December. With Canadian airlines still dealing with capacity constraints owing to the 737 Max groundings, a holiday-induced spike remains a risk for this December but we do not anticipate anything near the 21% m/m lift last year. Looking past the ex. food and energy index, we see downside risks to the Bank of Canada’s core measures owing to a sizeable m/m increase last year and muted pressures from a flat print this month. This, alongside the widening output gap last year should weigh on measures of core inflation, although we expect the average to hold over 2%. 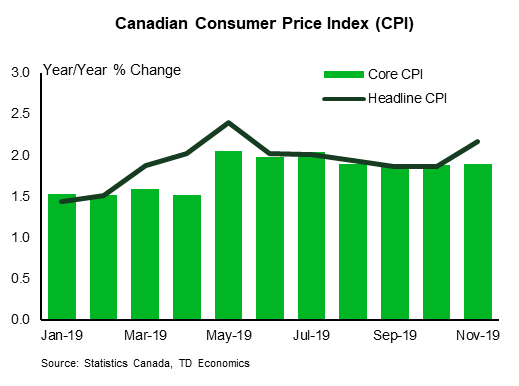 TD looks for a muted 0.3% rebound for November retail sales following one of the largest monthly drops since the financial crisis. Auto sales were a key contributor to the October pullback but preliminary data suggest that headwinds have continued throughout Q4, with another decline in sales activity for November. Elsewhere, higher prices at the pump will provide a modest tailwind to gasoline stations while sales of building materials should continue to feel a pinch from the slowdown in housing starts. Black Friday shopping should have little impact on the headline print given the timing, with most sales beginning on November 27th, and a growing share of holiday shopping shifting to online platforms which are not captured in the headline print. Meanwhile, real retail sales are likely to see little change on the heels of contractions in September and October, owing to the muted nominal increase and higher consumer goods prices, which implies continued softness in quarterly consumption data. 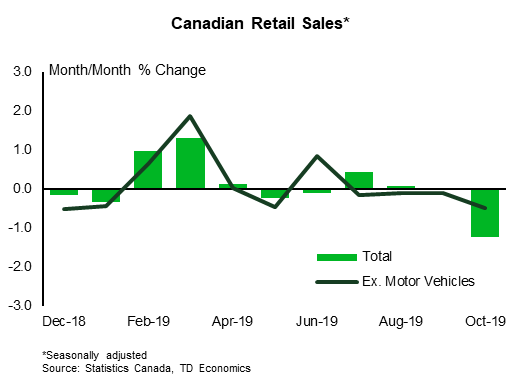