The common currency gained against the USD yesterday as reports surfaced that Germany’s finance minister seems to be considering easing the fiscal spending rules in order to boost the economy. The substantial spreading of the virus in countries other than China, seems to have spurred concerns about its effects on the German economy. The German finance minister Altmaier stated that domestic activity as well as construction are to be less harmed, yet the export oriented industrial activity could be under pressure and he continued to say that it is crucial that “we now provide economic momentum to stimulate growth”. It should be noted that ECB’s President Lagarde stated yesterday that fiscal measures intended to support economy are welcomed. We could see the EUR continuing to strengthen, albeit worries about the adverse effects of the Coronavirus and speculation for a possible rate cut by the ECB could turn the currency’s direction south again. EURUSD rose yesterday clearly breaking the 1.0885 (S1) resistance line, now turned to support. We tend to maintain a bullish outlook for the pair as long as it remains above the upward trendline incepted since the 20th of February. Should the bulls maintain control over the pair, we could see it breaking the 1.0940 (R1) resistance line and aim for the 1.1000 (R2) resistance level. On the other hand, should the bears take over, we could see the pair breaking the 1.0885 (S1) support line and aim for the 1.0830 (S2) support level.

…while the pound weakens on fiscal stimulus concerns…

The pound weakened against the USD yesterday, as worries about the fiscal stimulus promised by UK’s government, seem to increase. Media and analysts tend to note that the UK finance minister seems to have limited options between raising taxes, deepening austerity or leaving Tory promises on government borrowing rules. UK’s think tank, IFS seems to urge the finance minister not to abandon the governments’ promise for a fiscal stimulus and to raise taxes in order to fund it. It should be noted, that on the other hand, Johnson seems to be pushing for an increase of spending in order to boost growth. Should the headlines continue to feed worries about UK’s fiscal stimulus we could see the pound continuing to slip. GBP/USD dropped yesterday breaking the 1.2945 (R1) support line now turned to resistance. We maintain the bearish outlook for the pair as it remains below the downward trendline incepted since the 31st of the December. We should note though that the pair seems to be showing some signs of stabilization as its troughs seem to have stopped entering lower and lower grounds. Should the pair remain under the selling interest of the market, we could see it breaking the 1.2860 (S1) support line aiming for lower grounds. On the other hand should the pair’s long positions be favored by the market, we could see it breaking the 1.2945 (R1) resistance line and aim for the 1.3015 (R2) resistance level. 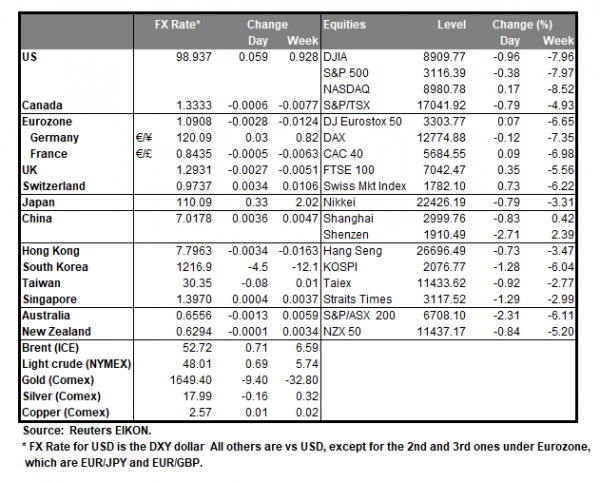