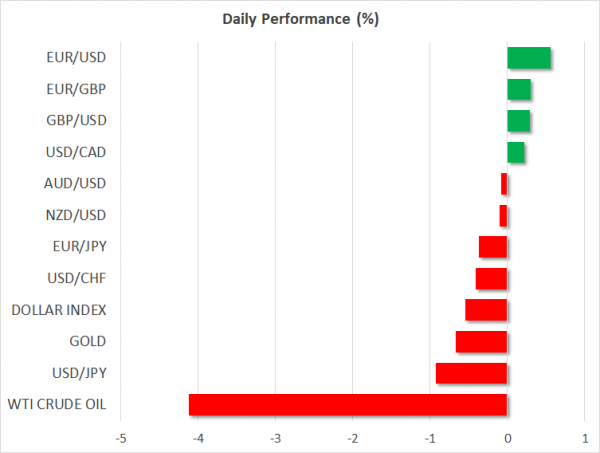 US jobless data could derail the latest recovery

Economic data finally comes back into the spotlight today, as the number of Americans filing for unemployment benefits last week will give us a taste of just how much destruction the pandemic has already left in its path. Make no mistake, this print could make or break the latest recovery in stocks.

A very high number would suggest that the unemployment rate is set to skyrocket when the nationwide jobs data are released next week, cementing fears of a deep recession as the collapse in consumption due to the lockdowns cascades into massive layoffs. Forecasts suggest that initial jobless claims will shoot up to 1 million, from 281k last week. If met, this would be the highest print ever, far exceeding the previous record of 695k.

In fact, the risks seem tilted towards a number higher than 1 million, perhaps significantly so. Data released from individual states so far point to a much bigger surge. Ohio for example – a state with less than 12 million in population – reported roughly 140k jobless claims for the week in question. More importantly, the Governor of California said yesterday that his state alone has seen 1 million unemployment claims over the past two weeks. Since last week’s nationwide total was just 281k, most of these claims will likely show up today.

A very disappointing number today, perhaps one above 2 million, could dent risk sentiment and by extension obliterate the latest gains in stocks. However, any weakness in the dollar might be modest and short lived. The world’s reserve currency has been acting like a haven asset lately amid all the carnage, so if the data today are indeed weak enough to revive fear among investors, the greenback might not stay down for long.

Caution creeps back in, yen bounces back

In the FX market, risk sentiment held strong for the most part yesterday, with the dollar and yen being the worst performers while the loonie raced higher, taking heart from the powerful stimulus measures announced in Canada.

Wall Street closed higher by 1%, but the Congress-powered rebound seems to have fizzled as futures point to a 2% drop at the open today. A similar situation is true in the currency arena, where the yen is recovering ground early on Thursday as commodity-linked currencies are left behind.

With the Senate officially approving the gigantic stimulus package overnight and the House all but certain to follow suit tomorrow, it’s quite worrisome that stocks haven’t been able to stage a more impressive rebound. Granted, much of that might be due to fears about today’s data and a lot will depend on their quality, but if $2 trillion in fiscal stimulus was only enough to keep markets afloat for a couple of days, that’s a huge warning sign for what lies ahead.

BoE meeting might be uneventful, focus on virus news

As for today, the Bank of England (BoE) will meet, but having cut rates twice already this month at emergency meetings, any further action today seems somewhat unlikely, especially with the recent tranquility in markets.

Beyond the US jobless claims, traders will also keep an eye on any virus-related developments. 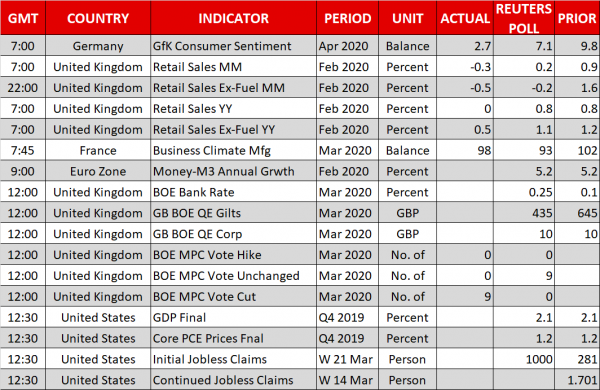