The global crisis from the coronavirus pandemic has produced much turmoil in financial markets even though economic data on the impact has so far been scarce. That is about to change as March figures start rolling in. Given the extent of the market fallout, investors may already be expecting the worst. That’s not to say, however, that once the data lay bare the true scale of the economic damage, investors won’t be unnerved. The main releases next week that could jolt traders are the manufacturing PMIs out of China, and the ISM PMIs together with the latest jobs report from the United States.

Aussie and kiwi put the brakes on; will they hold?

The antipodean currencies had already been on a downward path before the outbreak of the coronavirus as slowing growth in China – Australia’s and New Zealand’s largest trading partner – had pushed both the RBA and the RBNZ to cut interest rates in 2019. But although the two countries appear to be doing a better job than Europe and the US in containing the virus, their economic exposure to China and global trade has pummelled their currencies. 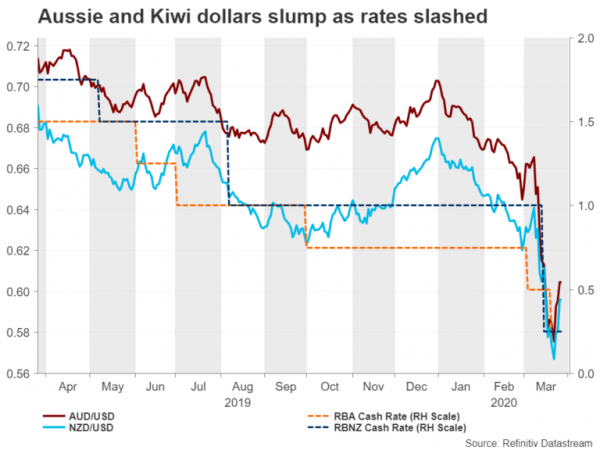 After a bruising month, the Australian dollar has rebounded by more than 10% from its trough, while the New Zealand dollar is up by about 9%. The deal struck in Washington this week on a gargantuan fiscal stimulus package provided a desperately needed boost to the markets. Looking ahead to the next seven days, risk sentiment will probably remain the key driver for both currencies as it will be relatively quiet on the data front.

The highlights in Australia will be the AIG manufacturing index for March on Wednesday and February retail sales on Friday. In New Zealand, the ANZ business outlook survey due on Tuesday will likely point to a big dip in business confidence in March.

China is no longer the epicentre of the COVID-19 pandemic but the return to normality has been slow and restrictions still apply to many parts of the country. It may be too early therefore to witness a marked improvement in the services PMIs due next week, though analysts are already foreseeing a solid rebound in the manufacturing PMIs. The official PMI figures are out on Tuesday and the Caixin/Markit surveys will follow on Wednesday (manufacturing) and Friday (services).

Last month, the official manufacturing print plummeted to 35.7 – a record low. It is projected to rise to 45.0 in March. A convincing sign that manufacturing activity is recovering could add to the improving risk tone, but this would have to coincide with some stabilization in the wider economy as well. 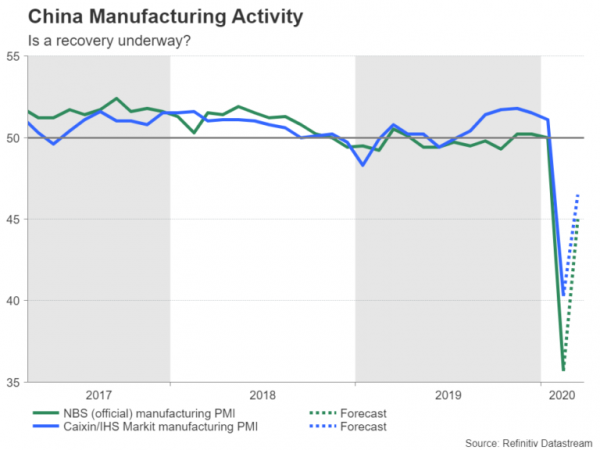 Like its peers, the Bank of Japan has responded to the virus crisis by pumping more liquidity into the markets. The Bank decided to extend as well as expand its asset purchases to shore up the economy and try to halt plunging shares on the Tokyo stock market. The Tankan report – the BoJ’s own quarterly business survey – is likely to keep the door to further easing wide open.

The survey, out on Wednesday, is expected to reveal a big drop in business confidence in all sectors of the economy during the first quarter, while the indices gauging the outlook for Q2 are forecast to show growing pessimism among businesses. Other data out of Japan will include jobs, retail sales and industrial production numbers on Tuesday. 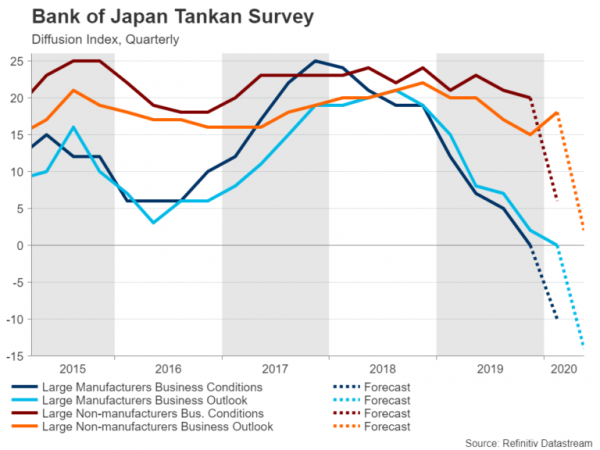 Amidst all the panic, the sharp pullback in the yen over the past couple of weeks might provide some relief to Japanese exporters.

As the virus spreads across Europe at an alarming rate, with the death rate rising just as fast, investors will be paying little attention to the Eurozone calendar next week. Still, the data will be significant from an economic perspective as the Economic Sentiment Indicator (ESI) and flash inflation numbers are due for March. The ESI is expected to have dived from 103.5 to 91.8, highlighting the rapid deterioration in the economy, while the harmonized consumer price index is anticipated to have fallen to a five-month low of 0.8% year-on-year in the preliminary reading. 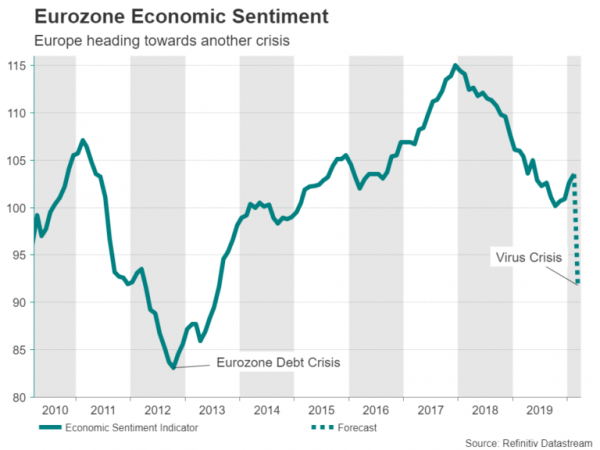 With the incoming data expected to get much worse in the coming weeks, it will only be a matter of time before pressure mounts on the European Central Bank to do more to help Europe’s struggling economies. The ECB has already performed one about-face since the crisis erupted, ramping up its stimulus programme to calm jittery markets in an emergency meeting last week, and could be forced to intervene again.

The euro has nevertheless managed to bounce higher with the help of the retreat in the US dollar. But the recovery could be cut short if the virus spread shows no sign of slowing in the next 2-3 weeks.

End of the US labour market boom?

The United States has now overtaken China as the country with the highest number of confirmed cases of the coronavirus, and the tally is expected to explode further as authorities step up the number of tests being conducted. However, the combination of the Federal Reserve’s QE bazooka and Congress’ $2 trillion spending package has, for now at least, restored some order in the markets. Not even a record jump in weekly jobless claims was able to upset the relief rally in equity markets.

But with a raft of key releases coming up next week, will investors be able to hold their nerve? The main ones to watch will be the Conference Board’s consumer confidence index on Tuesday, the ISM manufacturing PMI on Wednesday, the non-manufacturing PMI on Friday and the all-important nonfarm payrolls report, also due on Friday.

The consumer is one of the main pillars of the US economy but with people being asked to stay at home, that vital support is expected to disappear over the next few months. Retail sales were already down in February when the US was not yet impacted by the virus and things can only get worse from here. The consumer confidence index is expected to underline the deteriorating trend, dropping from 130.7 to 111.5 in March. 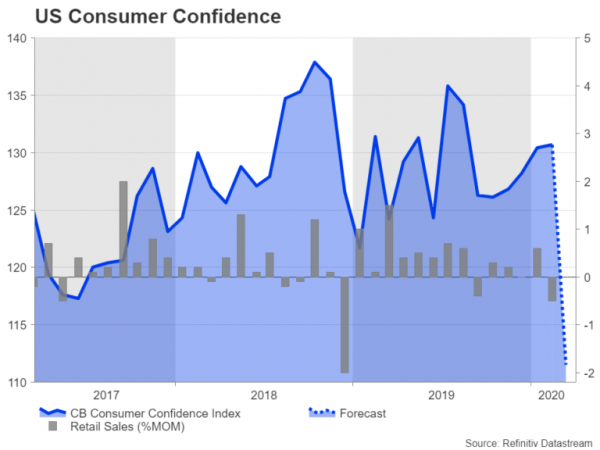 The ISM PMIs are not anticipated to bring any cheer either. The manufacturing PMI just avoided contraction in February but is forecast to slide into that territory in March, falling to 44.3, which would be the lowest since 2009.

And it goes without saying that the NFP report is also predicted to be pretty grim, with the US economy expected to have lost jobs for the first time since 2010. Forecasts are for nonfarm payrolls to plummet by 123k in March versus a healthy gain of 273k in February. The unemployment rate is expected to jump to 3.9%. 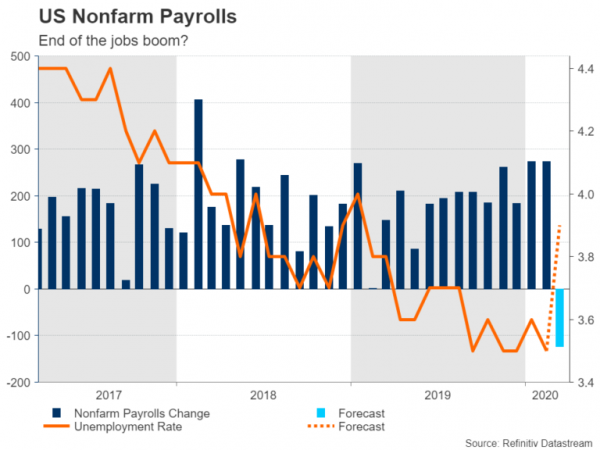 With the markets already having gotten a glimpse of what’s to come from this week’s dire jobless claims figures, a poor jobs report may not have much of an impact unless it’s shockingly bad. Instead, investors will probably choose to keep a closer watch on the rate of virus infection amid worries that the terrible situation in New York is a sign of what’s in store for the rest of the country.

Should the data and the virus developments trigger another bout of turbulence in the markets, the dollar is likely to benefit from safe-haven demand and head higher again, having only just come off from 3-year highs.

Eurozone PMI manufacturing finalized at 39.4, at least some stabilization, potentially return to growth