U.S. – Fiscal Stimulus on the Way as US COVID-19 Cases Surpass China

Yet another eventful week for financial markets as the coronavirus outbreak intensified and cases in the U.S. surpassed China. Equity markets were on an upswing mid-week on news that Congress agreed to a giant $2 trillion relief bill. Despite the rally, investors continued to seek cash and safe dollar assets. This drove yields on the safest, short-term Treasuries lower and settle into negative territory for the first time in more than four years.

The bad economic data intensified as a record-smashing 3.28 million Americans filed for unemployment benefits for the week that ended on March 21st. This is likely undercounting the number of unemployed workers since self-employed and gig workers do not qualify for unemployment benefits. In addition, many state systems were overwhelmed by the number of applicants. We expect more layoffs in the weeks ahead, with much of the nation’s nonessential businesses closed. This is likely to produce a record rise in the unemployment rate with the highest point likely in April of 12% or higher (see report).

This rapid increase in unemployment was captured in our forecast update this week. Our update assumes disruptions to activity drag into early May. Even as activity rebounds through the end of the quarter, real GDP and employment to fall at an unprecedented pace. We expect a sizeable rebound in the second half of the year, assisted by substantial fiscal and monetary stimulus.

Congress is on the cusp of passing a record setting stimulus package, amounting to $2 trillion in aid to individuals and businesses along with increased federal spending and support for state and local governments (see report). The key feature in terms of near-term support is the more than $500 billion in funding to individuals, made up of a combination of one-time checks and more generous unemployment benefits. Congress has done a good job making cash payments progressive and generous for workers who lose their jobs, many of whom come from lower-wage industries (see report). Policymakers have learned lessons from the financial crisis, where stimulus took the form of tax cuts and more benefits to businesses, that it is better to get stimulus out as quickly as possible, and income support measures are one of the best ways to do that.

It is telling about what an eventful week it has been, when an unscheduled Fed announcement falls to the bottom of the pile of events! The Fed made its previously announced asset purchase program open-ended and included purchases of commercial mortgage-backed securities. It created three new lending facilities, expanded previously created ones and established a “Main Street Business Lending Program” to support lending to small and medium sized businesses (see details).

Finally, Chair Powell acknowledged that the U.S. economy” may well be in a recession”. But that it is a very different sort of recession, since there is nothing fundamentally wrong with the economy. So “there can be a good rebound on the other side of this.” Policymakers actions this week have been the strong response markets were looking for to help ensure that this happens. 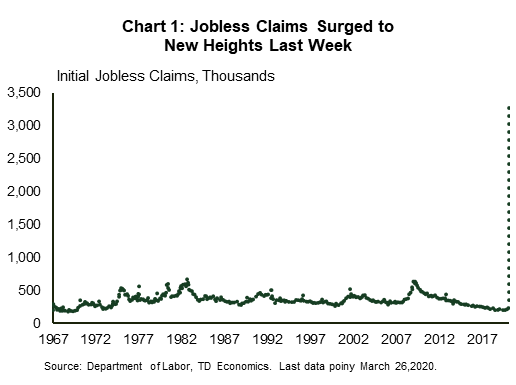 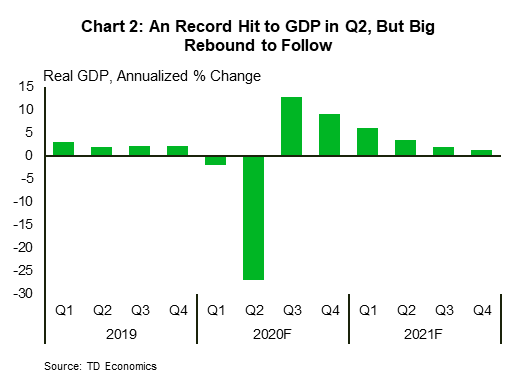 Canada – Policymakers Up the Ante

It was yet another wild week for markets. After several weeks of deeply bearish sentiment in equity markets, this week featured the return of the risk-on trade. Spirits were buoyed by U.S. policymakers coming together on a $2 trillion (USD) COVID-19 relief package. News of the agreement sent North American bourses higher, with the TSX up about 8% as of writing, even after losing some momentum on Friday. Still, despite the gain, the TSX remains nowhere near the levels of even three weeks ago.

U.S. lawmakers weren’t the only ones making news. Earlier in the week, Prime Minister Trudeau announced a new COVID-19 response measure, called the Canada Emergency Response Benefit. This benefit replaces two measures introduced a week ago and is geared towards income replacement. This means that a potential recipient doesn’t have to lose their job to see benefits. With the change, the amount of available support now totals $52 billion – twice the amount of the prior program. The Ontario government also got in on the act this week, rolling out their own support package. Their measures are valued at $17 billion (or roughly 2% of Ontario’s GDP ) and come mostly through payment deferrals and increased healthcare expenditures.

The Bank of Canada brought its own thunder on Friday, surprising markets with a 50-bps cut, lowering the overnight rate to 0.25% – consistent with the low seen during the financial crisis (Chart 1). With the cut, the Bank noted that the rate is at its “effective lower bound”, signifying that additional easing will come through other means. Alongside their rate cut, the Bank announced two new quantitative easing programs. The first is the “Commercial Paper Program” meant to ease strains in short-term funding markets. The Bank will also be purchasing Government of Canada debt, beginning in weekly increments of $5 billion, with the choice to ramp up buying if necessary. Policymakers have been proactive in delivering support to the financial system during the pandemic, which is not only helping the economy through this period of stress, but will also provide stimulus when the pandemic finally eases.

While the federal government has taken action to cushion households, Canadian firms will also need a lifeline. The announcement Friday of an (up to) 75% wage subsidy for small and medium sized businesses disrupted by shutdowns, could go a long way on this front. Small businesses are certainly feeling the pinch, and this was apparent in the 30-point plunge in the second reading of the March CFIB small business barometer (Chart 2). Particularly disturbing was the 52-point catering in Quebec, which had solid momentum heading into the crisis, but that also declared that all non-essential businesses must be temporarily closed.

Policy measures announced to-date will help ease pressures. However, they will not stop what will likely be an historic contraction in real GDP in the near-term. As detailed in our latest forecast update, we expect the Canadian economy to retrench by a nightmarish 15% (annualized), on average in the first half, with the pain being spread across all provinces (see forecast). Our forecasts imbed a strong second half rebound, aided by equally unprecedented policy supports. 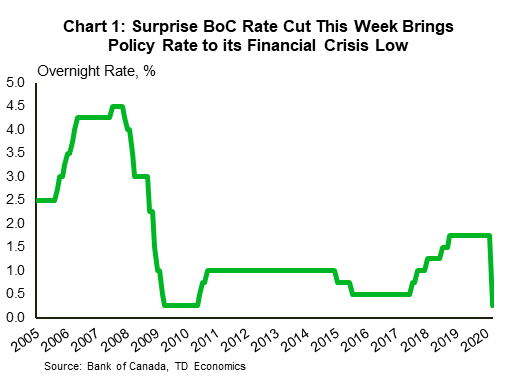 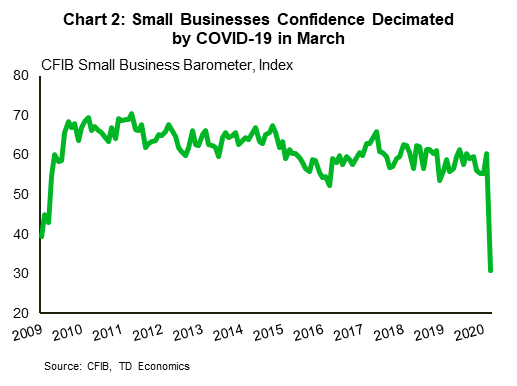 More regional surveys will be released before the ISM surveys (Chicago, Dallas and Milwaukee), so expectations could change, but the March ISM data are likely to portray an economy plunging into recession, even with the reports largely reflecting activity in the first half of the month. Sharp declines in the headline indexes look likely even with boosts from slower delivery times. We forecast drops to 44.0 and 43.0 for the manufacturing and non-manufacturing ISMs, respectively. April should be even weaker. 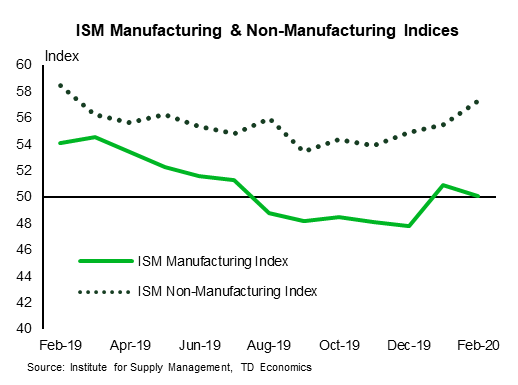 Most of the plunge in employment signaled by the latest claims data will be reflected in the April report, as the sample week for March was earlier in the month. The March data will probably still be weak, though, with net jobs growth held down by reduced hiring and payback for mild-weather-exaggerated strength. We estimate nonfarm payrolls at -200k, with the unemployment rate increasing to 3.8% from 3.5% in February. Payrolls will probably be down by several million in April. 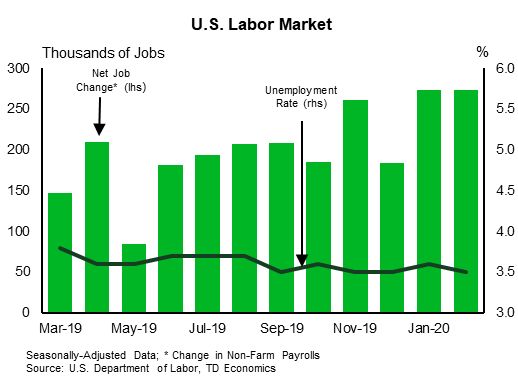 Industry-level GDP may not receive much attention given rapid developments over the last few weeks which has lowered the relevance of less timely data. Nonetheless, we expect the report to reveal a decent 0.2% advance, building on the solid handoff from Q4 in the calm before the COVID storm. Warmer weather is expected to weigh on utilities output alongside modest contractions in manufacturing and construction, leaving the service sector to drive growth. This will rely on a large contribution from wholesale trade, with volumes posting their largest one month increase since 2016. The transportation sector should exert a modest drag, owing to reduced rail traffic, but the larger impact of rail blockades will not be felt until February. Looking ahead to Q1 as a whole, we do not expect this report to have a significant impact on GDP tracking. Usually, a 0.3% handoff paired with 0.2% m/m in January would be enough to anchor Q1 growth in the mid-2% range; however, the looming impact of COVID-19 challenges that narrative given potential for historic contractions in Mar/Apr, which leaves us with projecting a 1.2% (ann.) decline. 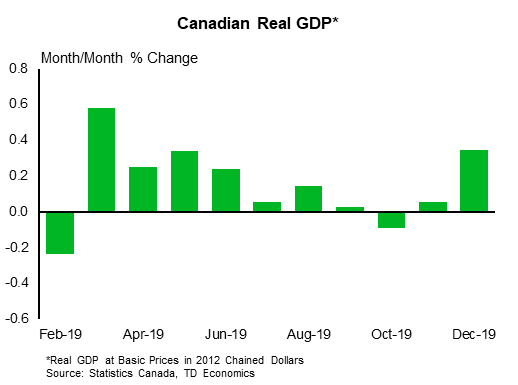 Manufacturing PMI will give an early look at COVID’s impact on the Canadian economy. TD looks for the index to fall to 45.0, surpassing 2015 lows, following a collapse in small business confidence which saw the CFIB Business Barometer fall by nearly 30 points to a new all-time low. While services should see a larger immediate impact than manufacturing, Markit does not produce a service-sector PMI for Canada, leaving investors in the dark until we receive Ivey PMI on April 7 and the March LFS on April 9. 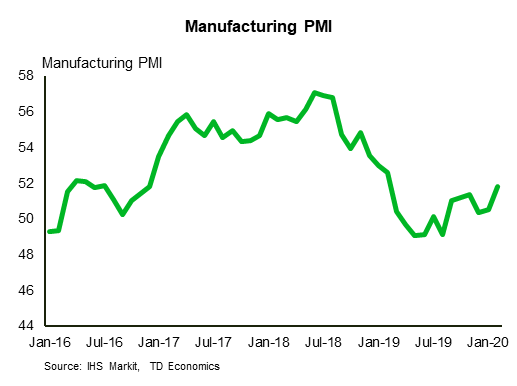 TD looks for the international trade deficit to widen to $2.8bn in February, as a combination of lower oil prices and railway disruptions weigh on export activity. Crude oil prices fell by roughly 10% in February, ahead of a steeper plunge in March, which will weigh on nominal exports of energy products. However, this should be offset by higher auto exports. Outside energy and motor vehicles, we expect rail blockades to have a notable impact. Protestors blocked access to several key lines (and ports) through February – a similar disruption to the railway strikes in November that caused a 6% m/m drop in traffic carried. While those strikes were more widespread than the recent blockade, they were a much shorter duration. For imports, we see a modest increase reflecting a recovery in domestic demand and slight pickup in US exports. However, Chinese trade flows will introduce a key wildcard given the timing in relation to the COVID outbreak. Canadian imports of pharmaceutical and medical goods fell by an alarming 26% m/m in January, likely a result of Chinese export controls, and there is potential for more widespread disruption this month. 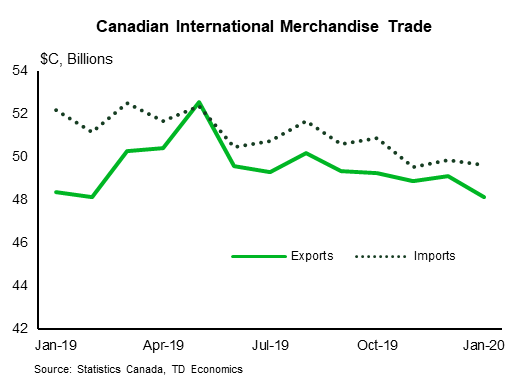