The serenity that has encompassed global markets lately will be put to the test next week, when America’s nonfarm payrolls data reveal how much destruction the pandemic has left in its wake. The Bank of England and the Reserve Bank of Australia are unlikely to deliver anything new at their meetings, though both will likely maintain a very dovish tone. Overall, the recent flood of liquidity and stimulus has helped stabilize markets, but ultimately, the V-shaped recovery that is now baked into stocks seems unrealistic.

Financial markets are closing April in a cheerful mood. US stocks are headed for their best month in decades, beaten-down commodity currencies are on the mend, and the defensive dollar is losing some of its shine. It seems that the incredible stimulus measures by governments and central banks, alongside the announcement of plans to re-open many economies and positive signals on the medical front about a treatment, have all done their part to calm investors.

However, other market segments paint a much different picture, specifically those that central banks have least influence on: commodity markets. Oil prices are in the dumpster as the world is running out of space to store the (not-so) precious liquid, while gold holds strong near 8-year highs, both completely disconnected from what the stock market is saying. One can argue commodities are the last bastion where demand and supply fundamentals still truly matter for prices, as they aren’t subject to heavy interference by central banks and may therefore reveal the real state of the depressed global economy.

At present, stock market valuations imply a quick, V-shaped rebound for the world economy. Alas, that assumption is probably overly optimistic. First, many small businesses will shut down permanently due to the lockdowns. Secondly, the impact on consumption from soaring unemployment is likely being underestimated. The US just lost all the jobs it created in the last decade, how long will it take to recover those and what does that imply for consumption? Third, consider the lasting behavioural shock to some consumers, who might be much more defensive with their spending even after things open up, as we’ve seen in China. 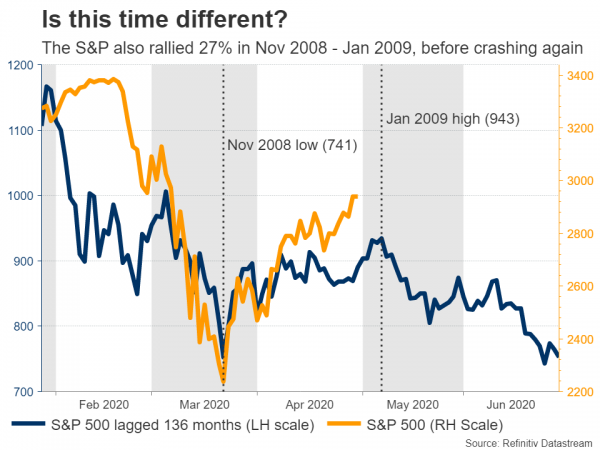 Fourth, what does the White House blaming China for the virus imply for US-China relations, trade, and (de)globalization? Finally, everyone is operating on the assumption that the re-opening process will go smoothly, that there will be no second waves of infections, and no more lockdowns.

To be clear, all this doesn’t mean the world will end. Rather, that markets may be underplaying the real magnitude of this crisis, how long it will take to get out of it, and its longer-term damage. All told, a lot of optimism has been priced back into stocks, suggesting that there’s a lot of room for disappointment if anything goes wrong and that the risk of another move lower from here seems dangerously high.

The wake-up call for investors could be the US employment data for April, due on Friday. The American economy is forecast to have lost a breath-taking 20 million jobs, which would push the unemployment rate up to 14%, far above the 10% peak of the previous recession. Average hourly earnings are expected to have lost steam too, but admittedly, the focus will be on job losses not wage growth.

These numbers seem horrible, but what’s truly horrifying is that this jobs survey was conducted in the second week of April, meaning the real unemployment rate today is much higher, as the number of people applying for unemployment benefits has remained alarmingly high the last two weeks.

Ahead of Friday’s jobs data, we’ll also get the crucial ISM non-manufacturing survey for April on Tuesday, which could also be crucial for market sentiment and the dollar. Then on Wednesday, the ADP employment report will give us a taste of what to expect from the official jobs data, before Thursday’s weekly initial jobless claims. 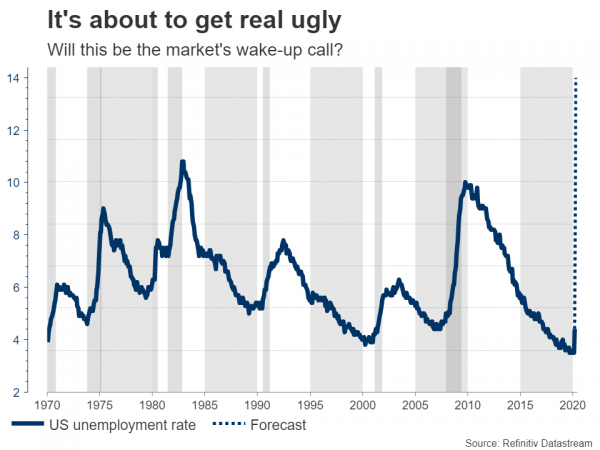 As for the dollar, it’s still difficult to envision any sustained weakness in the reserve currency. The Fed has already done almost everything in its power to weaken it, and yet the greenback remains stubbornly strong, as there are few viable alternatives. The euro for example looks quite ugly as the Eurozone’s recession might be deeper and its recovery longer than America’s, given Europe’s inadequate stimulus response and its lack of a burden-sharing mechanism to help ravaged economies like Italy and Spain.

Additionally, since the dollar has been acting like a safe haven in this crisis, euro/dollar tends to move in the same direction as stocks nowadays. Hence, if risk aversion indeed returns and stocks turn lower again, that could drag euro/dollar down as well.

Having already slashed rates to almost zero and restarted QE, the Bank of England (BoE) is unlikely to do any more for now. But it will still have a tough job on its hands, as its new economic forecasts will try to estimate the depth and length of this unique recession.

The pound’s reaction though, may depend mainly on the comments of the new Governor, Andrew Bailey. From a risk-management perspective, Bailey probably has more incentive to maintain a dovish tone and hint that his central bank is prepared to do much more if need be. Anything short of that could trigger a sizeable rebound in sterling and a tightening of financial conditions, which the BoE likely wants to avoid. 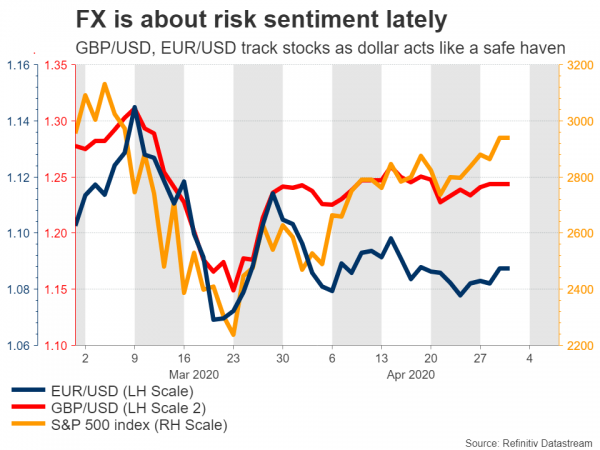 Overall, the outlook for the British currency seems challenging. In the near term, Britain is one of the few major economies that haven’t announced an opening-up plan so far, and the longer things stay shut, the bleaker the outlook for the economy. Longer term, Brexit worries could come back to haunt the currency, as PM Johnson insists that he won’t request an extension to the December deadline for the transition period, setting the stage for more eleventh-hour negotiations, brinkmanship, and drama ahead.

RBA: Talking down the aussie?

In Australia, the Reserve Bank is unlikely to act on Tuesday either, but that doesn’t mean the meeting will be boring. The Australian dollar has rallied quite sharply in recent weeks, partly as market participants rewarded the government’s impressive response to the pandemic and partly because the RBA itself has been slightly less aggressive than other central banks, for instance by ruling out negative rates.

Yet, a stronger currency is probably the last thing the RBA wants, as that could depress the nation’s exports even more. That implies policymakers may try to implicitly talk down the aussie, for example by highlighting that they can still do much more, like buying corporate bonds. 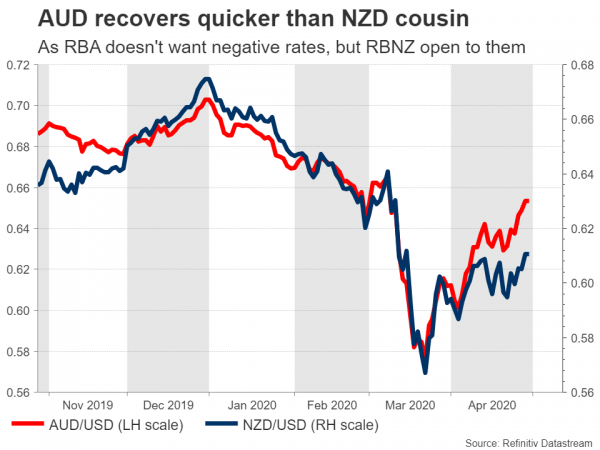 Overall though, the outlook for the aussie looks somewhat favourable. Although the overall global situation is clearly negative for an export-powerhouse like Australia, the fact that the domestic economy will be among the first to re-open, the huge fiscal stimulus, and the re-opening of its biggest trading partner – China – all paint a relatively bright outlook.

Australia’s retail sales for March are also due on Wednesday. Across the Tasman sea, New Zealand’s jobs data for Q1 will also see the light on Wednesday.

In Canada, employment data for April are due on Friday, and they will likely be a horror story judging by how many million Canadians have filed for unemployment benefits lately. That could weigh on the loonie, though the bigger driver for the currency might be how oil prices evolve.