Tomorrow during the Asian session, we get from Australia, RBA’s interest rate decision and the bank is expected to remain on hold at +0.25%. Currently AUD OIS imply a probability of 89.42% for such a scenario, also expecting the bank to maintain rates unchanged throughout the year as rates are allready at record lows. Should the bank remain on hold, we could see the market’s attention turning to the accompanying statement and the bank may continue to adopt a dovish tone, given the economic hit inland and abroad from the pandemic, as well as RBA’s supportive role for the Australian economy. At the same time, it should be noted that the Aussie seems to be weakening as market sentiment seemed to be less confident, after US President Trump threatened to impose new tariffs on China, over the coronavirus crisis this time. Also, it should be noted that Aussie traders may have their attention turned towards a number of financial releases which are due out this week. Should the market sentiment continue to be characterized by wide uncertainty, we could see the commodity currency continuing to weaken. AUD/USD continued to drop on Friday and during today’s Asian session testing the 0.6385 (S1) support line. We maintain a bearish outlook for the pair as the downward trendline incepted since the 30th of April seems to continue to guide the pair. Should the bears maintain control over the pair’s direction we could see it breaking the 0.6385 (R1) line and aim for the 0.6280 (R2) hurdle. If the bulls take over, we could see the pair aiming if not breaking the 0.6490 (S1) line.

Safe havens such as the JPY and CHF tended to outperform the USD as their safe haven qualities shined, after US President Trump’s threats for new tariffs for China regarding the coronavirus pandemic, increasing our worries from last week even further. According to Reuters, US officials stated that a range of options are under discussion yet were still on the early stages and recommendations have not reached the level of Trump’s top national security team. It should be noted though that Trump made clear that his concerns about China’s role in the pandemic take priority over his efforts to build a trade agreement. Should the situation escalate, and the US rhetoric sharpen further, we could see safe havens once again rising, as they accommodate the flight to safety. USD/JPY maintained its sideways movement, testing the 106.80 (S1) support line. We tend to maintain a bias for a sideways movement as the pair seems to be unable to clearly break below the prementioned support line. Should the pair’s long positions be favoured by the market, we could see it aiming if not breaking the 107.75 (R1) resistance line. Should the pair come under the selling interest of the market we could see it breaking the 106.80 (S1) line and aim for the 105.30 (S2) support level.

On Tuesday, from Canada we get the trade data for March. On Wednesday, from New Zealand we get the employment market data for Q1, Australia’s retail sales for March as well as Germany’s industrial orders. On a busy Thursday, Australia’s trade balance for March, Germany’s industrial output for March, UK’s Halifax house prices for April, Norway’s Norgesbank, UK BoE’s and Czech Republic’s CNB interest rate decisions, along with the newest US initial jobless claims figure, are to be released. On Friday, we get the US employment report for April as well as Canada’s employment data for the same month. 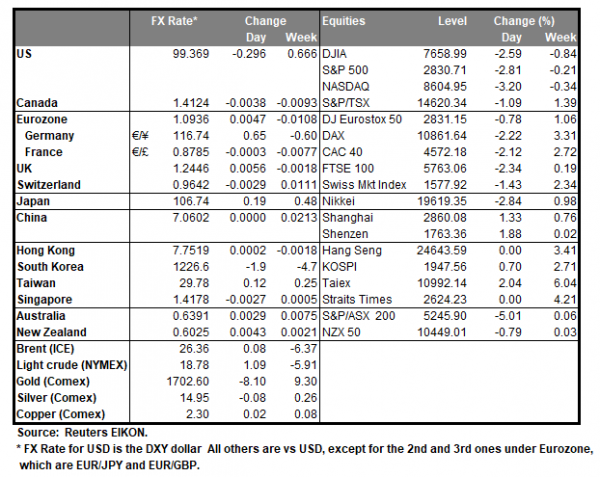 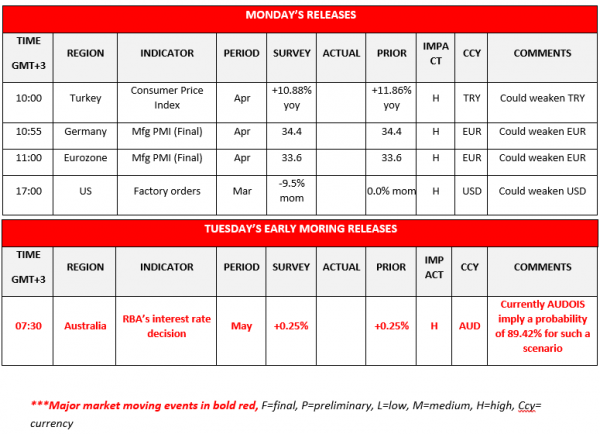 GBP/USD Could Accelerate Gains Above 1.2550