While markets are shifting focus to the second half of the year, hoping to see signs of economic recovery on the back of easing lockdown measures, the loonie will take a glance at Friday’s Q1 GDP numbers at 12:30 GMT. The monthly GDP readings for March may attract special attention as this was the month the government ordered the quarantine. Yet, the overall ugly outcome may prove outdated and probably not a game changer for the rising loonie.

GDP growth to post the sharpest decline ever in Q1

The Canadian economy was on a slippery road before Trudeau’s government put consumers in isolation and shut down businesses to deal with the Covid-19 outbreak in mid-March. Following December’s peak of 0.3% m/m, GDP growth eased to 0.2% in January and stagnated in February as the rapid spread of the virus in the rest of the world caused disruptions in international supply chains and raised concerns that demand for oil – one of Canada’s major export – may significantly ease, with the Saudi-Arabia- Russia dispute adding more pressure at that time.

According to forecasts, in March, when restrictions were rolled out in Canada, conditions deteriorated severely, resulting in a negative GDP growth of 9.0% m/m that heavily weighed on the Q1 GDP reading, squeezing it to negative territory and to a record low of -10% q/q (annualized). 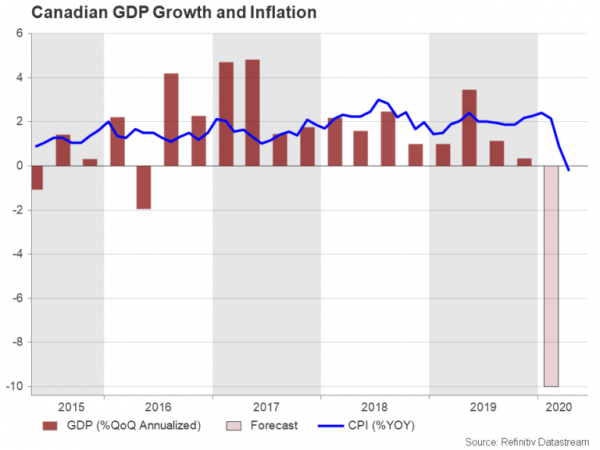 Investors are now pricing in some sort of economic recovery or stabilization beyond April in hopes that the gradual re-opening may allow some millions of citizens who applied for unemployment benefits the past two months to return to work. Consumers and businesses may also better utilize the increased liquidity from aid packages delivered by the central bank and the government.

But doubts remain about whether the market sentiment will continue to improve, delivering the so-called V-shaped recovery everyone is eagerly waiting. Although consumer confidence has shown signs of revival lately, the absence of a vaccine, which keeps the scenario of a second virus wave alive, is forcing governments to hold some key measures such as air travel restrictions and entrance to shops in place. In an export-oriented country which holds one of the world’s largest private debt-to-GDP ratio such as Canada, this increases the risk of a debt deflation and hence clouds the loonie’s future. Should consumption remain below normal levels, or otherwise the phenomenon of “fewer goods chasing big money” emerges, blocking inflation from reaching the central bank’s 2.0% mid-point target, companies who rely on circulated credit instead of savings, may push prices lower to boost demand. Some of them may default earlier, unable to meet their debt obligations, pushing their employees to unemployment.

Besides that, the US-China tensions which recently resurfaced are another troubling spot for Canada which heavily depends on international trade and particularly on oil exports. While crude prices have been quickly recouping losses this month, supported by the OPEC/Non-OPEC production cut deal and the re-opening plans, the rally took a pause recently amid fears the US could punish China over its security law in Hong Kong. 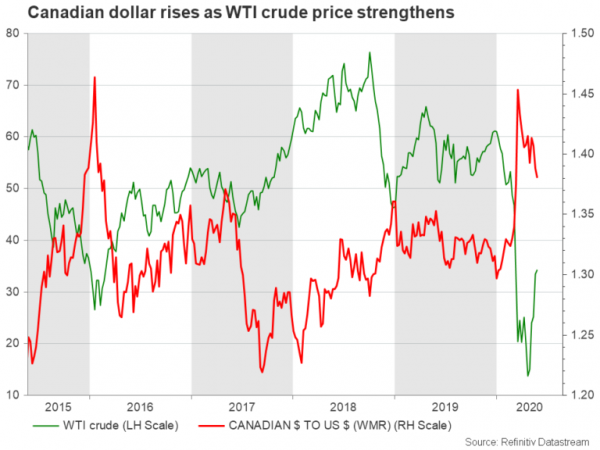 The dollar itself may prove another threat to the loonie if it takes advantage of its safe-haven feature amid the uncertain global economic environment, incentivizing traders to abandon the Canadian currency and buy the greenback.

Hence, while the loonie accelerated on Tuesday, sending USD/CAD comfortably below the crucial support of 1.3850 – a move that could confirm additional declines ahead – any broader appreciation may remain under speculation throughout 2020. On Friday, GDP growth readings may not change USD/CAD’s downward direction despite providing a clearer picture on Canada’s economic status as markets are more interested to see how things are evolving in the post-lockdown period. The Bank of Canada, which estimated a 3% GDP contraction in the first quarter may also adopt a wait-and-see approach on June 3 under the new chief Tiff Macklem who preceded Steven Poloz in order to monitor how the re-opening plans combined with the current monetary policy affect the economy – likely it could increase corporate bond purchases if it wants to help more but interest rates are not expected to turn negative. Yet, it could given the aforementioned headwinds it could endorse a dovish forward guidance, saying that additional stimulus cannot be ruled out in the foreseeable future if the data in the coming months move in the wrong direction.

From a technical perspective, USD/CAD is currently testing another key barrier at 1.3723 on the downside and should it give way, the sell-off may stretch towards 1.3600.

Alternatively, if the pair jumps above the 1.3800-1.3850 area, it may need to clear the wall between the 20-day simple moving average (SMA) and the descending trendline around 1.3980 to stretch higher.