Financial markets erased their earlier gains this week as concerns about rising coronavirus infection rates weighed on sentiment. As of writing, the S&P 500 was on track to end the week more than 2% below last week’s close.

While new COVID-19 infections have generally stabilized in other advanced economies, cases continue to climb in the U.S. Indeed, this week saw new infections hit a daily record increase of nearly 40,000 on Thursday, with cases rising in more than half of U.S. states. Arizona, California, Florida, the Carolinas and Texas are on the unenviable list of states seeing a steep surge in new cases (Chart 1).

While there has been little to suggest the reinstatement of total lockdowns from state officials thus far, reopening plans have been rolled back or delayed in some states. In Texas, bars have been ordered to shut back down, while restaurant capacity has been reduced to 50%. Officials in New York are postponing the reopening of shopping malls and movie theaters and, along with New Jersey and Connecticut, are now requiring travelers from virus hot spots to self-quarantine for 14 days. As noted in our State Economic Forecast, the uncertainty created by a continued rise in cases will likely weigh on consumer spending and business investment even without official shutdowns.

Looking in the rear-view mirror, economic data for May and June, when economies were reopening, has continued to pleasantly surprise. Personal spending bounced back in May, increasing by 8.2% month-on-month (Chart 2). Personal income, on the other hand, fell by 4.2%, no longer lifted by one-time CARES act checks that went out the month before.

The pick up in spending was driven by durable goods orders, which jumped by 15.8% in May, led by an increase in vehicle orders. Elsewhere, signs of improving economic activity came through in Purchasing Managers’ Indexes (PMI) readings across major economies including the Euro Area, Japan, and the UK in June.

On the housing front, sales data released this week also showed signs of improvement. New homes sales soared by 16.6% month-on-month in May as buyers rushed back into the market, looking to take advantage of low mortgage rates. Sales of existing homes fell by 9.7%, reflecting the drop in contract signings in the previous two months when transactions were hampered by state mandated lockdowns. However, a pick-up in mortgage applications suggests existing home sales should rebound in the months ahead.

While economic data have generally taken a positive turn, some indicators are showing signs of plateauing. Following a rapid decline in the back-half of April and May, the number of weekly jobless claims steadied at about 1.5 million each week in June. Next week’s job report will shed more light on the labor market’s health, but its recovery is likely to be an arduous slog. Acknowledging this, the Federal Reserve, this week, ordered banks to put a cap on their dividend payouts and suspend share buybacks. The measures are intended to preserve their capital in the event of a prolonged economic downturn. 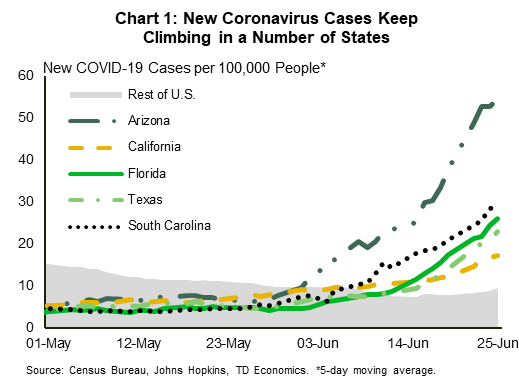 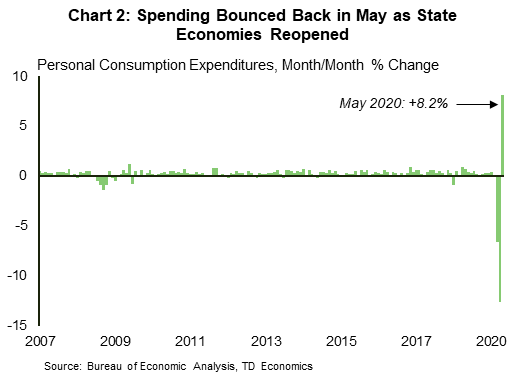 Canadian financial markets were mixed this week, with risk-off sentiment dominating in the second half as COVID-19 cases accelerated in the U.S. The cautious tone was fueled by renewed global trade tensions. Specifically, there were reports that the U.S. may re-levy aluminum tariffs on Canada. All told, the S&P/TSX Composite ended the week down around 1.3% (as of writing). Risk-off sentiment spilled over to oil markets, where the WTI benchmark fell to around US$38 after crossing the US$40 threshold earlier in the week. Despite improving fundamentals, oil markets still have to grapple with a sizeable inventory build and lingering uncertainty around the path of future demand.

Meanwhile, Canada’s AAA rating was downgraded by one of the rating agencies this week (to a still-high AA+). This relatively unsurprising development caught headlines, but was brushed off by markets, with no noticeable reaction in the Canadian dollar or Canadian government bond yields. It is important to put this downgrade into context – Canada is one of the few G7 economies boasting a AAA rating from more than one agency. Additionally, the scale of its COVID-19 fiscal response is not much different relative to other advanced economies. In fact, it is relatively mild compared to responses seen in Europe and Japan.

On the data front, Statistics Canada offered us a flash estimate of May’s manufacturing sales, predicting a 6.2% increase, following a stark 28.5% decline in April. This is a preliminary estimate that will likely be revised, but it provides a glimpse of what appears to be a slow and gradual recovery from a sharp slump in the manufacturing sector. Meanwhile, the CFIB’s timely small business barometer release for June showed a more encouraging increase in business confidence, with the index rising for the third consecutive month (to 54.6). Further increases are expected as provincial economies continue to reopen.

Elsewhere, the remaining, lower-tier releases were mostly lagged and served to confirm pre-existing convictions. Investment in building in construction was down 45.9% month-on-month in April, with the largest declines centered across Canada’s largest provinces. Statistics Canada also released its Food Services and Drinking Places survey for April, which showed a 39.7% decline in sales. On this note, real-time data from OpenTable continues to show a steady improvement in seated restaurant diners as provinces relax restrictions (the latest in Ontario and Quebec).

On a separate note, the Bank of Canada’s Governor, Tiff Macklem, delivered his first speech this week. He emphasized that inflation targeting will remain the cornerstone of its monetary policy framework, despite uncertainties brought upon by COVID-19. He also discussed the central bank’s new quantitative easing program. While the core aim of these programs was to ensure proper financial market functioning and liquidity, he noted that they are also providing added monetary stimulus. Importantly, the Governor downplayed the likelihood of negative interest rates, citing their potential distortionary impacts on financial institutions. 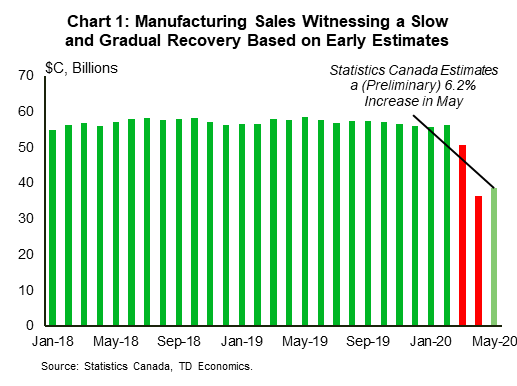 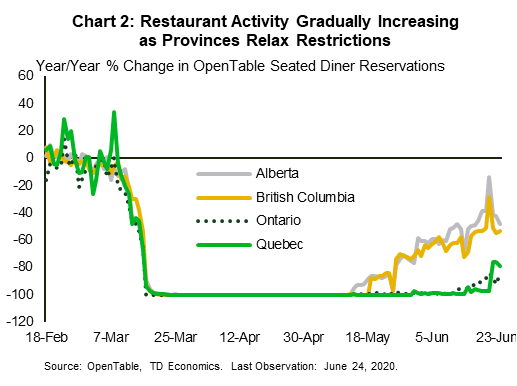 More regional manufacturing surveys for June will be released ahead of the ISM data, so the forecast could change, but the surveys that have been released are signaling a rise in the ISM index to modestly above the 50 level (TD: 51.5, consensus: 49.2). Of course, modest growth after a plunge still implies a sizable net decline following three months under contraction. 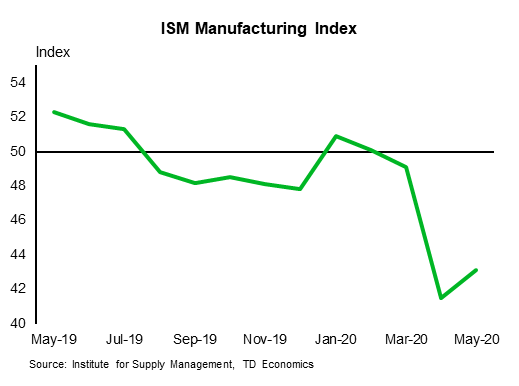 The renewed uptrend in COVID cases cautions against extrapolating, but payrolls probably rose fairly strongly again in June after a 2.5mn rise in May: We estimate up 4.0mn. That said, the implied 6.5mn rise reverses less than a third of the 22mn plunge in the previous two months, and upward momentum appears to be fading again. Despite the strong gain in payrolls, we expect the unemployment rate to remain around where it was in May (13.3%). We are allowing for a reversal of some of the recent decline in the participation rate as laid-off workers start actively job searching again, as well as a fading of the impact of classification issues that have limited the rise in the unemployment rate. 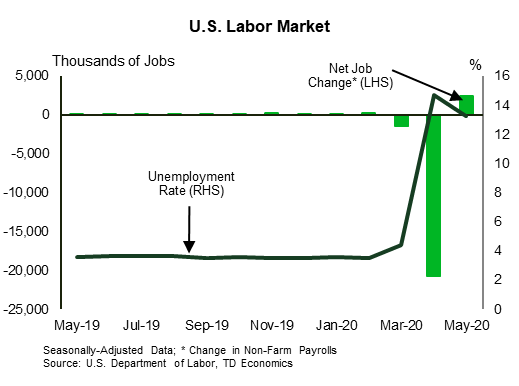 Industry-level GDP will confirm another historic contraction in April with output expected to fall 12% m/m for an 18% drop from February, slightly worse than flash estimates from Statistics Canada. We expect a fairly even performance across goods and services and there are few industries where we see any scope for higher output. On the goods side, manufacturing and construction should lead the decline; energy will also weigh heavily following a sharp pullback in oil sands output and crude by rail exports. For services we look for retail and wholesale trade to see larger contractions, while some service sector industries that were quicker to shut down in March (education, health care, recreation) should see more modest declines this month. Although we are seeing more evidence that April marked the low-point for economic activity, a pullback of this magnitude will still leave the Canadian economy on track for a contraction in the mid-30% range (saar) for Q2 which is consistent with the BoC’s less downbeat scenario for the outlook. 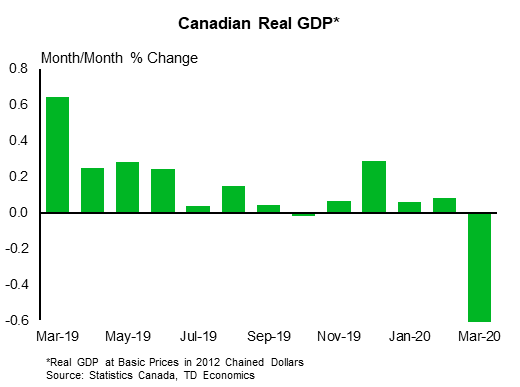 TD looks for the international trade deficit to widen to $4.60bn in May as a muted rebound in exports is outpaced by stronger import activity. Auto exports were the largest drag on the April report, falling 80% m/m and shaving over 10pp from total exports, and we see scope for further declines in May. Canadian production did not resume until late in the month and advance US imports of motor vehicles fell in May. Energy products should drive most of the nominal increase, helped by a surge in crude oil prices that bottomed in April. Imports are subject to more uncertainty, owing to the global disruptions from COVID. We look for only a partial rebound from last month’s 25% drop, reflecting a muted pickup for industrial activity south of the border, although consumer goods imports should bounce back with signs of increased demand in May. 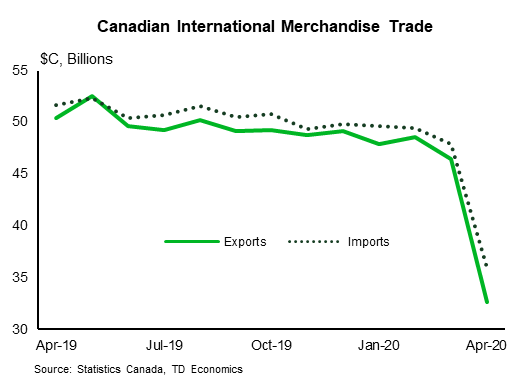