Early economic data from the recovery should continue to be upbeat over the next week. Persistently strong residential building permit issuance means Canadian housing starts probably ticked up in July from the 212k annual rate in June after not slowing much during the downturn (outside of Quebec where residential construction was ordered shut down in April.) And there are early signs that a lot of real-estate transactions were merely delayed in the spring, rather than lost altogether. Indeed, regional reports point to a surge in activity in the resale market in July. Household spending too, appears to have improved from levels that were already better than expected in June.

Growth in the manufacturing sector accelerating

Manufacturing has picked up the pace after lagging behind an early recovery in household spending. Statistics Canada estimated manufacturing sales rose another 16.8% in June – consistent with the jump in exports in the month. That would still leave sales 16% below February levels, though factory hours worked rose another 3.6% in July and a jump in the July Markit Canadian Manufacturing PMI suggests business sentiment is still improving. Meantime, auto production rebounded to 90% of year-ago levels in June from zero in April and July production was likely above year-ago levels as plants shuttered during the lockdown skipped their usual summer retooling shutdowns.

Canada grows at speedier clip (for now) as virus surges in the U.S.

Given tight cross-border production chain linkages, the recovery in the Canadian industrial sector depends critically on the performance of the US economy. And there are early, if not surprising, signs that the resurgence in virus spread in the US has stunted the pace of the recovery there. US employment rose sharply again in July, but has still only retraced 42% of losses over March and April – less than the 55% recovered in Canada over the same period. Nonetheless, US retail sales and industrial production reports over the week ahead are both expected to show ongoing growth in July, just at a slower pace than in June.

Much of the resilience in household spending early in the recovery is likely due to exceptional government income transfers to those who have lost work in the pandemic. In the US, the $600/week federal top-up in PUA has already expired and negotiations to replace it are as-yet unresolved in Congress. In Canada, the CERB program still has some room to run – although the first recipients of the payments will start to run out of benefits by the end of September.

Now, capricious US trade policy can be added to the list of go-forward concerns for Canada’s economic recovery. The reinstatement of US tariffs on imports of raw aluminum from Canada announced by the Trump administration this week will not alone have a large impact on the broader economy. Aluminum exports account for less than 3% of total exports to the US, and about 2% of exports overall. But, as with the original steel and aluminum tariffs, there appear to be limited economic rationale for the measures. And if anything, the tariffs will ultimately increase costs for American purchasers. Nevertheless, they could still be popular in parts of the US industrial heartland that were key to President Trump’s 2016 election win. And with the president still well-behind in most polls, there could be more measures to come as he scrambles to turn the tide before November (and take attention off of the COVID-crisis). 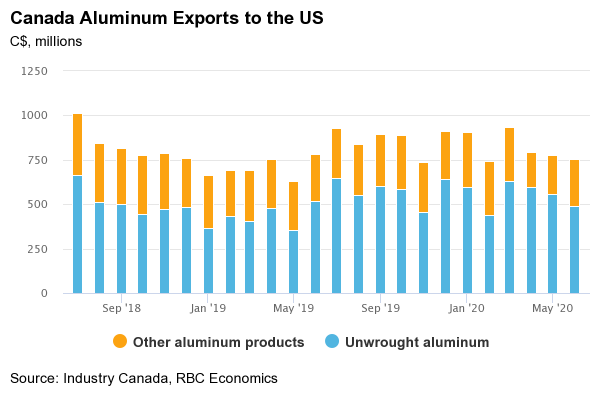 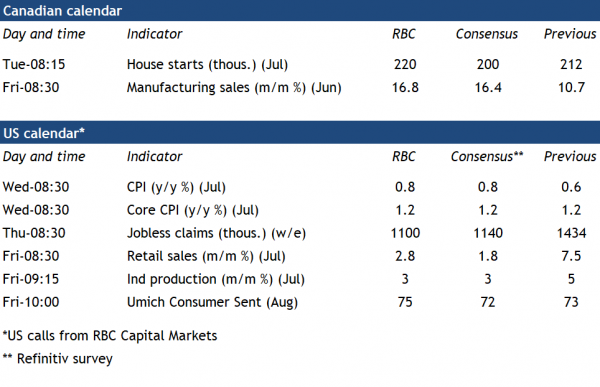