The Federal Reserve will be front and centre next week as traders will be hoping policymakers will provide clearer signals on future monetary stimulus than they did in the FOMC minutes when they hold a virtual gathering of their annual economic symposium. Data out of the United States will constitute the predominant data releases, and coupling that with the Fed event, there can be little doubt the US dollar will be the primary driver of the FX market in an otherwise quiet week. The market tone might also be set by the outcome of fresh trade talks between the US and China in the coming days, assuming they don’t get cancelled again.

Fed may yet drop a summer bombshell

With election uncertainty mounting, hopes of a congressional deal on a new fiscal package slipping and President Trump turning up the rhetoric on China, investors are once again running to the Fed for a safety cushion. The US central bank has thrown all but the kitchen sink at the pandemic crisis, flooding financial markets with an unprecedented amount of liquidity. But looking at present financial conditions, there are few signs of market stress and the US recovery appears to be maintaining sufficient momentum despite some headwinds. That gives the Fed little incentive to exhaust its already depleted toolbox, or even to commit to a more explicit forward guidance at this point in time, especially given that a major revamp of policy could be deemed politically sensitive with a presidential election just around the corner.

Thus, not everyone was surprised when policymakers signalled their reluctance to change stance in the minutes of the July meeting, which dashed expectations of a big announcement at the September meeting. However, the minutes did hint that some revision to the forward guidance is still on the cards and that several participants favour additional easing. So when Fed officials take their annual Jackson Hole conference online due to the coronavirus, they may yet drop a bombshell or two as they shed some light on their thinking. This year’s event will be livestreamed on August 27-28, with other world central bankers also expected to participate.

Keeping up a front

Ahead of policymakers’ virtual get-together, investors might be more preoccupied with geopolitics if a rescheduled call between US and Chinese negotiators goes ahead as planned. The talks have only been confirmed by China so they might not even take place. But if new discussions are held, they could disclose how committed the two sides remain to the ‘phase one’ trade agreement and if Beijing is able to allay American security concerns about Chinese tech firms.

All in all, markets don’t appear to be particularly troubled by Washington’s recent offensives against China, and probably rightly so. The White House cannot afford to rip apart the trade deal just prior to the election as it would damage Chinese agricultural purchases from the farming heartlands of Trump’s voters. Similarly, contrary to what Chinese officials might publicly acknowledge, Beijing does not want to lose any more American investment than it already has under Trump’s protectionist policies and its restrained response to the constant attacks from the White House is an indication of this.

Plenty of data, but dollar to take cues from Fed

In the absence of any excitement from either the Fed or the Sino-US political games, the economic data on the American calendar should keep traders busy enough. The Conference Board’s closely watched consumer confidence gauge will kick things off on Tuesday, along with new home sales, while on Wednesday, durable goods orders for July will be the next clue on how the US recovery is proceeding.

On Thursday, the GDP estimate for the second quarter might receive a small upward revision and pending home sales are out too. But the biggest highlight will be Friday’s personal income and spending numbers, as well as the core PCE price index. Although it’s too early to see how consumption is being impacted after most of the government’s virus relief programs expired at the end of August, the July figures will nevertheless be important to understand the scale to which the virus resurgence in the US hurt households’ incomes and spending. 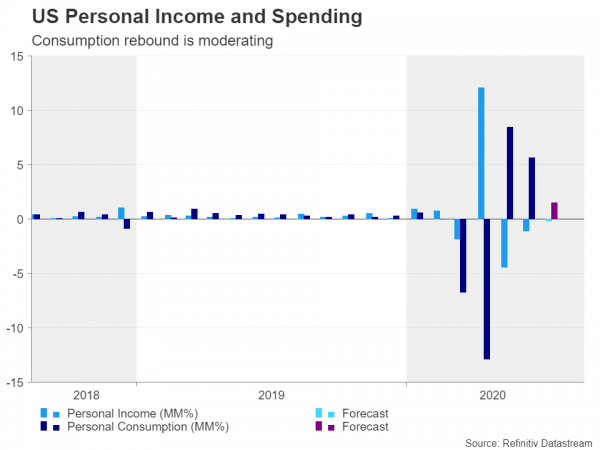 The dollar could stabilize further from its recent two-year lows if the data isn’t very supportive of a strong recovery as this would draw safe-haven demand. But the greenback will likely be taking its cues mainly from what Chairman Powell and his colleagues have to say amid the growing impatience among investors about the Fed’s lack of clarity on future policy direction. The biggest risk therefore to the dollar is distinctively dovish remarks that could send Treasury yields plunging across the curve, removing key floors in the currency’s downtrend.

A dovish Fed would probably not go down too well in Australia and New Zealand where the soaring aussie and kiwi have eroded the competitive edge of their country’s exports. The Reserve Bank of New Zealand has already verbally intervened, knocking the New Zealand dollar off its highs. The currency has been underperforming all month and there’s the added pressure from the RBNZ actively exploring the option of negative rates. 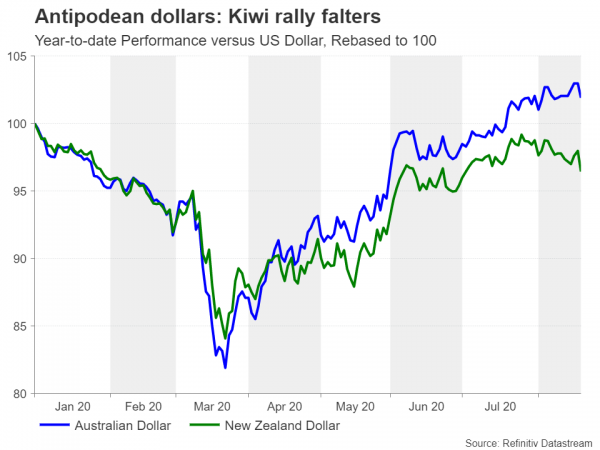 How the incoming data evolves will be crucial in deciding whether the RBNZ eventually adopts negative rates so traders will be keeping a close eye on Monday’s retail sales numbers for the second quarter and Wednesday’s trade figures for July.

In Australia, the country’s Reserve Bank has not been quite as dovish, signalling that further policy easing is unlikely for now. Hence, the quarterly prints on construction output (Wednesday) and capital expenditure (Thursday) may only trigger some knee-jerk reaction, with the Australian dollar’s broader trend to continue to be set by the global risk mood.

Is the euro losing some of its shine?

Weaker-than-expected flash Eurozone PMI numbers for August, combined with rising expectations that the European Central Bank is more likely than not to increase monetary stimulus later this year, may have struck a blow to the euro rally – at least in the short term. Emerging doubts about the Eurozone recovery and whether Europe can really outperform the US could constrict the single currency into a sideways range until a clearer image forms on the outlook.

But of course, the greenback’s own path will play just as important a role in the euro/dollar pair, and the euro may manage to eke out some gains in a relatively quiet week if dollar weakness persists. The only top tier data due out of euroland next week are the Ifo Business Climate survey for Germany on Tuesday and the European Commission’s economic sentiment indicator on Thursday. 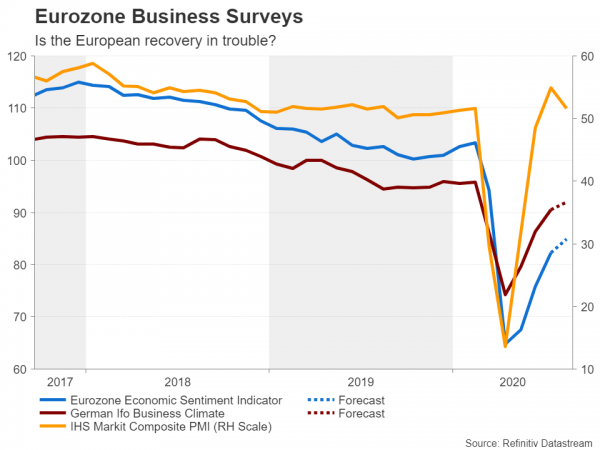 Also on the agenda are several Q2 GDP readings. Germany and France will publish their final estimates on Tuesday and Friday respectively, while Switzerland, Sweden and Norway will release their first estimates over the coming days. Although these may not necessarily be market moving, they should provide a more complete picture of the virus impact on European economies and how steep a mountain they each need to climb.

Another nation reporting growth figures next week is Canada. Canada’s GDP rebounded by 4.5% month-on-month in May and is expected to have recovered further in June. But for the quarter as a whole, the economy probably contracted at a record pace. The GDP numbers out on Friday will be watched to get an idea of how big the virus slump was in Q2 and where the recovery stood in June.

However, traders will likely look beyond the lockdown-era data and focus on the improving outlook for the Canadian economy. Encouraging signs so far about the economic bounce-back have led many economists to up their forecasts for the third quarter. The milder-than-anticipated hit to the US economy from the second virus wave is another reason why investors have scaled back some of their earlier gloomier predictions as stronger growth south of the border bodes well for Canada too.

This has spurred the Canadian dollar to touch a 7-month peak versus its US counterpart and looks set to extend those gains if the recovery does not stumble and the greenback remains on the backfoot.