With almost one month to go until the presidential election, investors are increasingly focused on how the outcome will impact financial markets. The short answer is that there is no automatic rule for how the dollar and equity markets will react to a Trump or Biden win – it all depends on whether the victor will also have full control of Congress or not. This piece will examine how markets might respond to a Democratic sweep, a Republican one, a divided government, and an inconclusive outcome.

The November 3 election between Donald Trump and Joe Biden could have a dramatic impact across different markets, from equities to commodities to currencies, and investors are scrambling to figure out exactly what that might be. The outcome will determine whether the next round of fiscal stimulus will be mild or powerful, whether the trade war with China will escalate further, and whether corporate and capital gains taxes will be raised or cut.

Opinion polls and betting markets both have Biden ahead quite substantially. But remember, because of how the US electoral system works, national polls don’t mean much. Hillary Clinton won the popular vote in 2016 by 3 million votes but still lost the election. What really matters are polls in the so-called battleground states, which are much closer.

For the markets, the main variable is whether we get a unified government, where the president’s party also controls both chambers of Congress. If not, much of the president’s agenda would probably be blocked from the opposing party as each chamber of Congress has ‘veto’ powers. 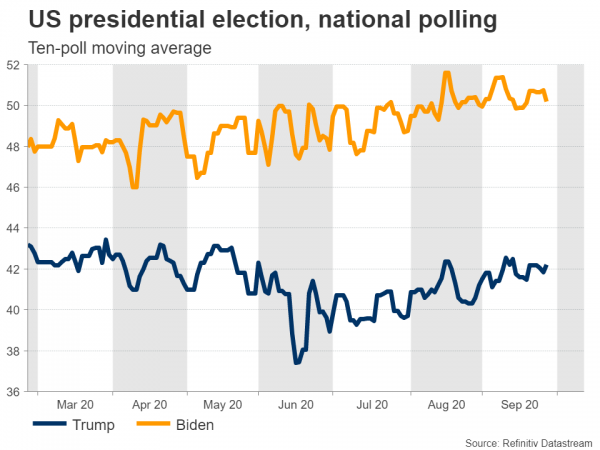 The Democrats currently control the House of Representatives while the Republicans control the Senate. Opinion polls for those races suggest the House will most probably stay in Democratic hands, but the Senate is too close to call.

This is the most likely outcome if polls and betting markets are to be trusted. The Democrats keep the House and take the Senate as well as the presidency. In short, this scenario could spell trouble for the dollar but lift the stock market.

Let’s start with the dollar. The Democrats are set to introduce a massive fiscal stimulus package, which would blow up the deficit even further, hitting the dollar. Even though they insist most of that would be financed by raising taxes on the wealthy, corporations, and capital gains, that side of the agenda is rather unlikely to be implemented.

This is simply not how American politics work nowadays, as politicians rely on donations from both companies and wealthy individuals. Plus, raising taxes in the middle of a recession is economically disastrous.

Besides deficit concerns, the dollar could also take a hit from the more stable foreign policy a Biden administration may bring. While Biden isn’t exactly friendly towards China, he is softer than Trump and is unlikely to introduce new tariffs. This could boost global trade flows and thus increase dollar liquidity abroad. It could also reduce the appeal of defensive assets, both of which are negative for the dollar.

The Australian dollar could benefit because of the close trading relationship Australia has with China, so aussie/dollar is a key pair to watch. 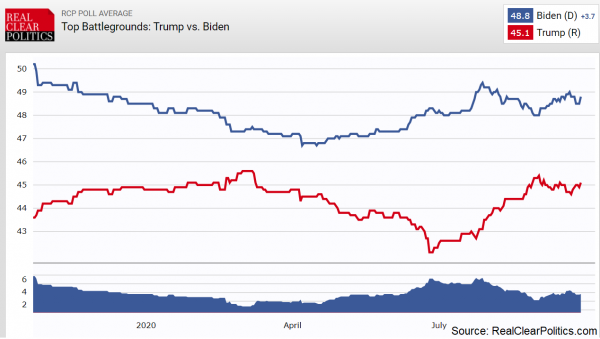 As for stocks, many argue that a Democratic sweep would be a negative outcome because of tax concerns. However, if investors sense that Biden is unlikely to significantly raise taxes because of the fragile economy, but will still deliver huge spending, that could catapult markets higher.

Within the stock market, the sectors that might get the biggest boost are renewable energy companies and perhaps electric vehicle makers, as a Biden administration would likely push hard towards ‘green energy’. On the flipside, oil companies might suffer most alongside crude prices.

This is a very low probability scenario as it would require Republicans to take the House, which seems extremely difficult. If they somehow manage that, the result may be a stronger dollar and a higher stock market. 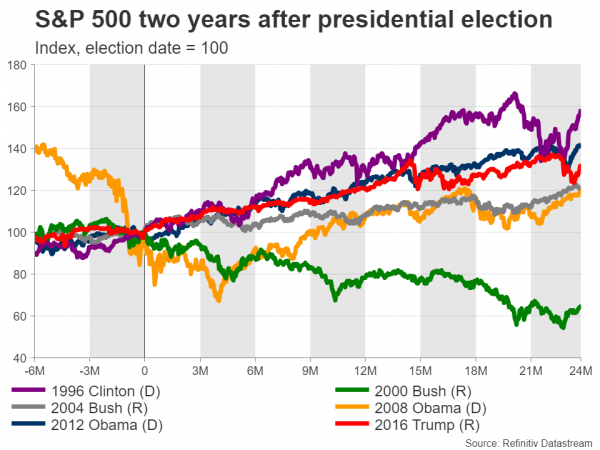 The dollar could gain both on expectations of lower deficits and on fears that Trump might restart the trade war with China or even Europe, sending investors into the reserve currency’s safety.

On the equity front, while the Republicans probably won’t deliver as much fiscal spending as the Democrats would, they might cut taxes again and push for deregulation, cheering markets up. Indeed, just the fact that there would be a united government may be enough to lift markets. The oil sector could get the biggest boost, alongside financials.

This outcome is quite viable. It would imply less fiscal stimulus, and almost no chances of tax hikes as Senate Republicans would block everything. The deficit would likely increase and trade policy could become less volatile under Biden overall. Those argue for a weaker dollar.

For equities, this scenario may be slightly negative. The risk of higher taxes would be virtually eliminated, but the chances of a big spending package would also decline amid the political deadlock, which net-net might be bad news.

This would be a continuation of the status quo. The Democrats would block much of Trump’s domestic agenda, leading him to focus mostly on deregulation and foreign policy, where the president has more autonomy. The trade war could escalate, supporting the dollar and hurting the likes of the aussie. 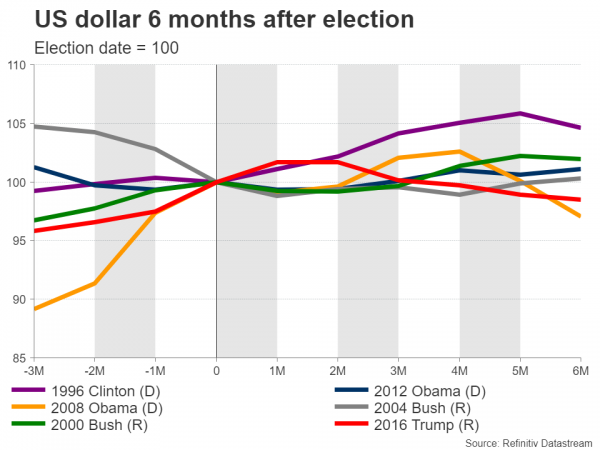 It could be slightly positive for equities. Trade tensions might flare up, but there could also be some fiscal stimulus and deregulation.

What happens if the result is contested?

This is the worst of all worlds for equities in the short term, and perhaps for the dollar too. Trump has refused to commit to a peaceful transfer of power if he loses and might challenge the result in the courts.

The last time this happened was back in 2000 with the Bush-Gore debacle. The stock market fell 12% over the next five weeks, though the dollar was more volatile, rising first and then giving back those gains to trade much lower overall. 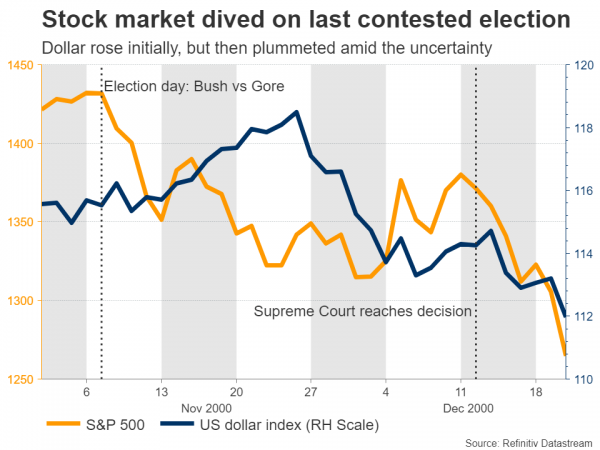 All told, there are a lot of moving parts to this race and how markets will ultimately react may depend mostly on who controls Congress and whether we have a clear result on election night. While Biden currently looks set to win, there is still a month to go and one should never count Donald Trump out, especially in this volatile environment.