Week Ahead – Hopes of a Democratic Sweep Propel Markets Higher

It’s been a wild week for global markets, which defied the gloom after President Trump halted the negotiations for another relief package to focus instead on the rising odds of a decisive Biden victory that could bring much greater stimulus after the election. This will likely remain the dominant theme for the dollar and equities for now, with economic data being overshadowed by incoming election polls. Meanwhile, the earnings season resumes, Brexit talks continue, and it seems like the second presidential debate will be delayed.

No stimulus negotiations? No problem

Donald Trump stunned financial markets this past week, after he abandoned talks with the Democrats over a new virus relief package. The news sent shivers through Wall Street at first, pushing stocks down and the dollar higher, but these moves did not last. Markets quickly turned around as investors realized that this is a huge political mistake by Trump, so huge that it increases the chances of a ‘blue sweep’, where the Democrats win the White House and take full control of Congress.

This outcome would likely result in a much bigger spending package and higher chances of extra packages if anything goes wrong in the future. Even though we would have to wait until next year for the newly elected Congress to convene before anything gets done, the endgame is worth it for markets. Why not wait a few months if that means an extra trillion dollars or so in stimulus? 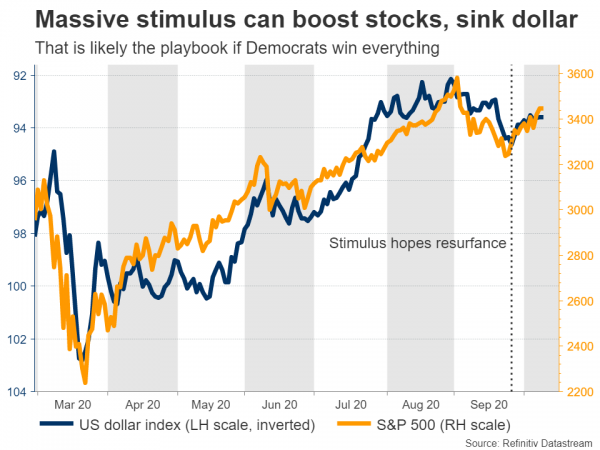 In addition, the rising chances of a decisive Biden victory diminish the likelihood of a closely contested election that ends up disputed in the courts for weeks, reducing one of the biggest near-term risks. And if Trump was just bluffing and the negotiations resume soon, then there’s still an outside possibility of a ‘big deal’ getting done before the election, also a market positive.

Overall, this election has become the central market theme now, so incoming opinion polls will likely eclipse everything else. More signs that the Democrats are growing their lead could fuel expectations for a unified government and thus of greater stimulus. This could boost stocks but hurt the dollar, on concerns that the US deficit will blow up even further. That is also a magical elixir for gold, which benefits both from massive deficits and a softer dollar. 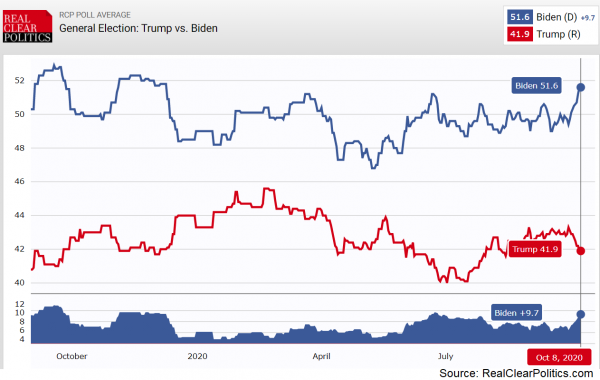 At this point, the biggest risk for markets may be signs that Trump and the Republicans are staging a comeback, which could pour cold water on hopes for heavy spending.

US inflation and retail sales on the dollar’s radar

Staying in the political arena, it is still unclear what will happen with the second presidential debate. The committee that manages these debates announced it will be held virtually, but Trump said he has no interest in a virtual debate. Hence, it currently looks like it will be delayed by a week to October 22 or cancelled altogether.

Besides any new election polls, the dollar will also keep an eye on the CPI inflation data that will hit the markets on Tuesday and the retail sales for September that are due Friday. Forecasts point to a solid set of numbers, which could reinforce the Fed’s reluctance to commit to any new stimulus for now. 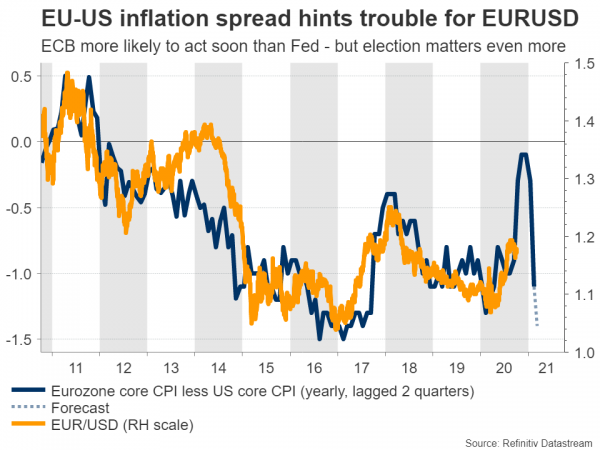 Combined with the risk of new partial lockdowns across Europe and an ECB that may be forced to act again soon after the Eurozone’s core inflation rate dropped to a record low in September, a solid batch of US data would argue for another wave lower in euro/dollar. Of course, the bigger driver for the pair will be election expectations.

The British pound has been the financial equivalent of a pinball machine in recent weeks, bouncing up and down amid a barrage of Brexit headlines. Progress is apparently being made in the talks, but differences remain on hot issues like limits on state aid, fisheries, and a dispute resolution mechanism to police any deal.

The UK has given an ultimatum that if an agreement is not imminent by October 15, it will walk away and start preparations for a no-deal exit. In reality though, that is by no means a ‘real’ deadline, as political deals tend to be struck at the last possible moment, which might mean November or even December. 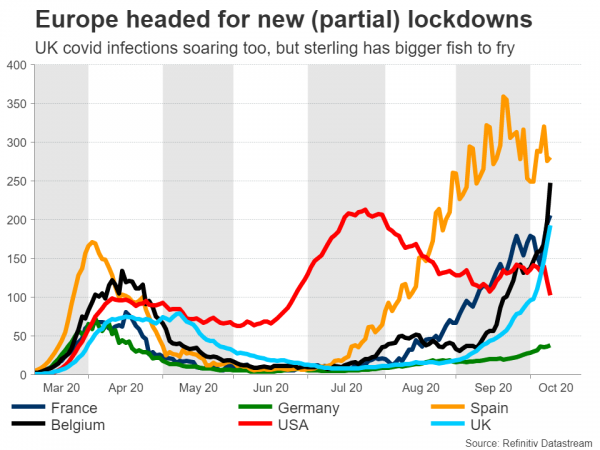 The coming weeks could therefore be a rocky period for sterling. If the ‘deadline’ passes and a deal doesn’t seem near, Boris Johnson could indeed announce that he’s walking away, to regain some negotiating leverage. Ultimately though, an eleventh-hour deal is still the most likely outcome as neither side can afford to throw its economy into an even deeper recession. Hence, while the pound might stay under pressure for now amidst all the drama, it could eventually stage a monster rally.

On the data front, the jobs numbers for August will be released Tuesday but are unlikely to matter much. The BoE has its hands tied by Brexit, and whether it cuts rates to negative might depend primarily on politics.

In Australia, the employment report for September is due Thursday and forecasts point to a jump in the unemployment rate. If so, this could all but ensure that the RBA will cut rates next month, following its latest statement that lowering the rate of unemployment is “an important national priority”.

Markets still haven’t priced that in, with the implied probability for a 10bps rate cut in November being only 40%, leaving plenty of room for the aussie to drop as expectations for a cut grow. 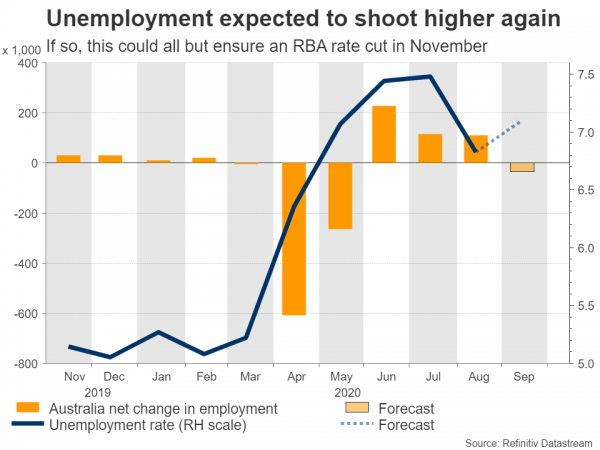 Having said that, maybe it is not all bad news. Australia has very close trading ties with China, so if a Biden victory means calmer US-China relations and a weaker US dollar, then the overall trajectory for aussie/dollar may still be upwards.

Speaking of China, the nation’s trade data for September will be released Tuesday, ahead of inflation stats for the same month on Thursday.

Finally, the earnings season resumes with major banking institutions like Citigroup, JP Morgan, and Bank of America reporting their Q3 results during the week, alongside several airlines.