It will be another action-packed week in global markets, with two central bank meetings, a potential US stimulus agreement, and a flurry of economic data. The European Central Bank is certain to shower investors with more liquidity. Yet, this move has already been telegraphed and priced in, so if policymakers want to sink the supercharged euro, they need to over-deliver. The political arena will continue to excite as well, with the Brexit talks now in their final stage.

All markets want for Christmas is liquidity

It has been a wild ride for most assets lately as the vaccine euphoria merged with hopes for more stimulus, propelling stock markets to new records and wrecking defensive plays like the dollar and gold. Investors are calculating that the coming months will be difficult, but there is light at the end of the tunnel and central banks are about to unleash another tsunami of liquidity to keep things glued together in the meantime.

We are now at a juncture where everything is considered bullish. Take economic data. If they surprise to the upside, that’s great. If they disappoint, then the Fed will have to roll out a bigger liquidity bazooka, and the politicians in Congress will feel more pressure to deliver a new stimulus package, which is even better for stock markets (and negative for the dollar). 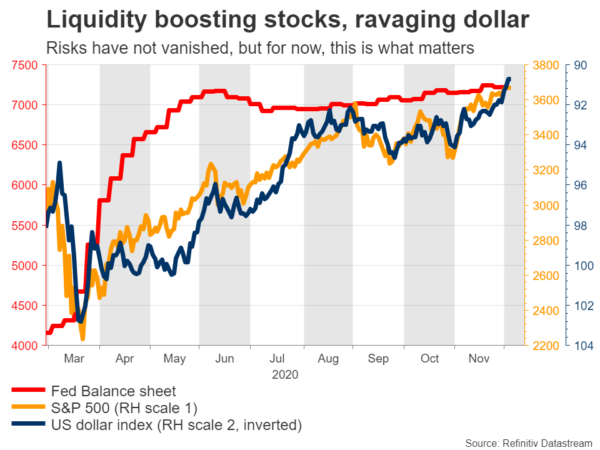 All this does not mean the risks have vanished. Rather, the abundance of liquidity is masking many risks. Such risks include a potential wave of small business bankruptcies, as loans are not a solution for insolvency. Or another surge in unemployment after all the support measures expire. Or perhaps inflation dynamics. House prices are booming, commodities are rallying, and savings rates have risen dramatically. All that pent-up demand could really show up in consumer prices once everything reopens. What would the Fed do then?

Of course, these are all future discussions. For now, the main variable is how much the ECB and the Fed will pump, and how big of a stimulus package Congress will deliver. As long as the liquidity keeps flowing, the markets could continue to party.

How worried is the ECB?

The ECB is in a tough spot. It is widely expected to deliver more stimulus on Thursday, after it basically pre-committed to that at its previous meeting. The problem is that most of this has been priced in already and yet, the euro is much higher on a trade-weighted basis, which is what the central bank cares about. A stronger currency can hold back growth and inflation, and with the Eurozone already in deflation, an even stronger euro will be a headache.

In a situation like this, the central bank wants to deliver something bigger than investors expect, to push the euro back down. The market consensus is for another €500bn in QE purchases, likely complemented by more ultra-generous loans to banks. If the ECB wants to clip the euro’s wings, it needs to surpass this, perhaps by delivering €750bn. 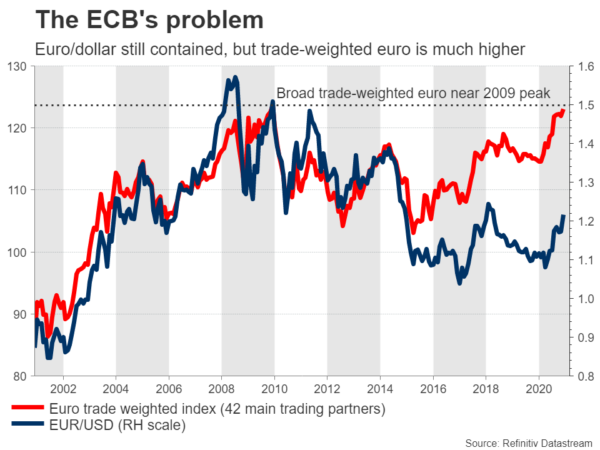 But that’s easier said than done. The Governing Council is notoriously divided, and it is doubtful that Germany and France for example will go along with ultra-dovish proposals. There was already pushback against all the measures implemented in the spring.

Bearing all this in mind, there is a real risk that markets are left disappointed by the overall easing package. If so, the euro could briefly spike higher. However, it will probably be a very close call.

BoC unlikely to rock the boat

Over in Canada, the central bank meets on Wednesday. Since the BoC’s previous meeting, economic data have been decent, vaccines were announced, and oil prices surged, painting a brighter picture for the Canadian economy. 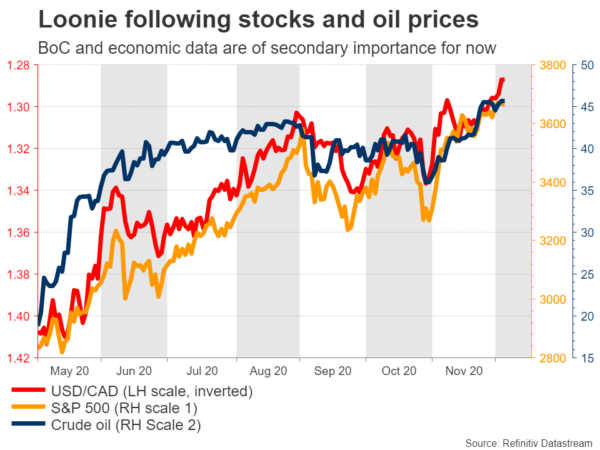 As such, the Bank is unlikely to act, though there is some scope for a more optimistic tone. If so, that would argue for a small positive reaction in the loonie. In the bigger picture, the loonie’s fate hangs on how stock markets and oil prices perform. The correlation between the loonie and the S&P 500 is extremely strong, as is the correlation with crude. Domestic data are of secondary importance for now.

The Brexit talks have entered their final stage, and the main area of disagreement is how the deal would be policed. The EU wants strong reassurances, as trust has evaporated after the UK introduced the controversial Internal Market Bill that would violate international law.

To be clear, both sides want a deal. Adding a no-deal Brexit on top of the troubles facing both economies would be disastrous. And an agreement seems close. Even the market agrees, judging by the pound’s performance.

But the clock is running out. On Monday, the UK will bring the Internal Market Bill back to Parliament. If it passes, it would be a dramatic signal of negotiating in bad faith. The UK is trying to get an agreement with the EU while simultaneously trying to rewrite the previous agreement alone. Granted, this is probably just a ‘power move’ by Boris Johnson, but still, this vote could be crucial for whether the talks will succeed. 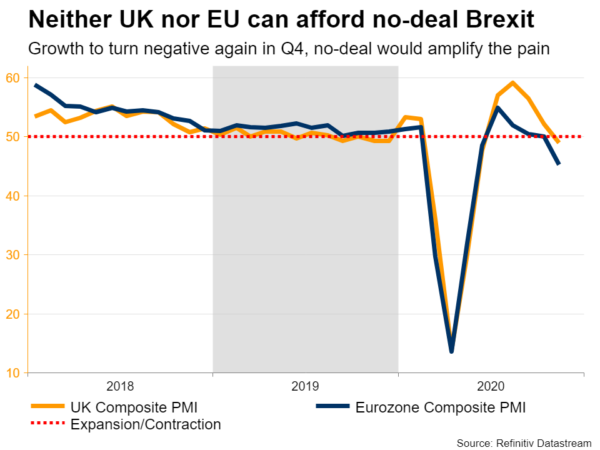 Then on Thursday there is an EU summit, which is seen as the ‘deadline’ for Brexit. It is the last chance for EU leaders to approve a deal before the year ends. Hence, this week will be crucial. A lot of optimism has already been baked into the pound, so the negative reaction if the talks fall apart may be bigger than the positive reaction in case of a deal.

US fiscal deal on the menu?

Finally, let’s take a deeper look into why the dollar has been ravaged lately. In a nutshell, it’s about inflation. The markets expect the Fed to deliver another round of liquidity, and politicians in Congress have resumed negotiations for a new relief package of almost $1 trillion.

The synergy of fiscal and monetary policy, combined with the vaccines and the pent-up demand waiting to be unleashed, has investors betting on higher inflation. The catch is that Europe is lagging the US. Hence, markets see a situation where US inflation is accelerating, but European inflation is still subdued, and the Fed keeps its foot on the gas given its tolerance of above-target inflation. 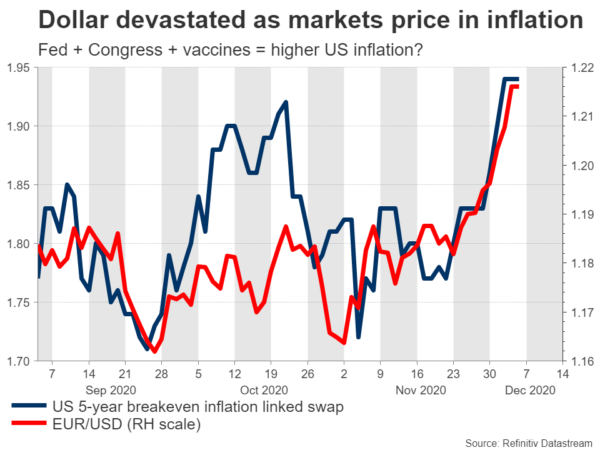 That’s a toxic cocktail for the dollar. Is it all downhill for the currency then? If the macro outlook is as cheerful as markets currently think, maybe so. However, dollar-short is already a very crowded trade according to positioning data. This suggests that any risk-off episode could spark a major short-squeeze and therefore a strong rebound in the greenback, even if the overall trajectory is lower.

In the near term, everything hinges on the Fed and Congress. The more stimulus, the worse for the dollar and the better for stocks. Congress adjourns for holidays on Friday, so a deal could arrive before then.

On the data front, the latest CPI numbers are out on Thursday. In China, trade data for November are due Monday, before inflation stats hit the markets on Wednesday.