USD tended to retreat against a number of its counterparts yesterday after the Fed’s interest rate decision to remain on hold as was widely expected. The bank implied that still no interest rate hikes are in the schedule until 2023 is through, as per the renewed dot plot, albeit more policymakers see that as a possibility. At the same time, the bank expects the economy to grow by 6.5% in the current year, while inflation is to surpass the Fed’s target and reach 2.4% yoy. In its accompanying statement the bank underscored that the “ongoing public health crisis continues to weigh on economic activity, employment, and inflation, and poses considerable risks to the economic outlook”. It was characteristic of the Fed’s dovishness that Fed Chairman Jerome Powell stated in his interview that the bank wants to see some actual “substantial progress” before talking about tapering. Today we expect USD’s direction to be influenced by fundamentals, yet traders may keep an eye out also for the US financial releases.

Despite a slight drop initially AUD/USD rallied yesterday after the Fed’s interest rate decision, breaking the 0.7725 (S2) and the 0.7785 (S1) resistance lines, both now turned to support and continued aiming even higher. Despite the steep rise, we may see the pair correcting somewhat lower, given also that the RSI indicator below our four-hour chart seems to stabilise just below the reading of 70. Should the bulls regain control over the pair’s direction, we may see AUD/USD breaking the 0.7840 (R1) resistance line and aim for the 0.7900 (R2) level. Should the bears take over, we may see the pair aiming for the 0.7785 (S1) support line and should that be breached the next support level noted from our side would be the 0.7725 (S2).

Pound traders could focus on BoE’s interest rate decision today and the bank is widely expected to remain on hold at 0.10%. The markets seem to have almost fully priced in such a scenario and BoE’s QE program is also not expected to change by analysts. The questions we tend to focus on are whether the bank will recognizing the improvement of UK’s economic outlook stemming from the fast pace vaccination program performed in the UK and whether it worries and what it plans to do for a rise in yields. Overall expectations for an acceleration of inflation, given a possible acceleration of the GDP rate could create some hawkish tendencies in the bank while worries for a slack still being present in the UK labour market may enhance the banks’ dovishness. Should the dovish side overshadow any hawkishness, we may see the pound weakening.

GBP/USD benefitted from USD’s weakening rising from the low boundary of its range bound movement at 1.3845 (S1) and aimed for its current high level of 1.3990 (R1). We still maintain our bias for a sideways movement between the prementioned levels for now and for it to change we would require a clear breaking of either of the prementioned levels. Should the pair find renewed buying orders along its path, we may see it breaking the 1.3990 (R1) resistance line and aim for the 1.4145 (R2) level. On the other hand, should a selling interest be displayed by the market for cable, we may see the pair’s price action, breaking the 1.3845 (S1) support line and aim for the 1.3700 (S2) support barrier. 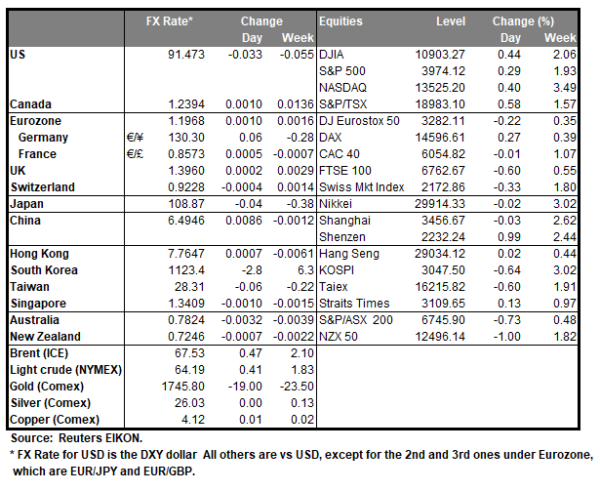 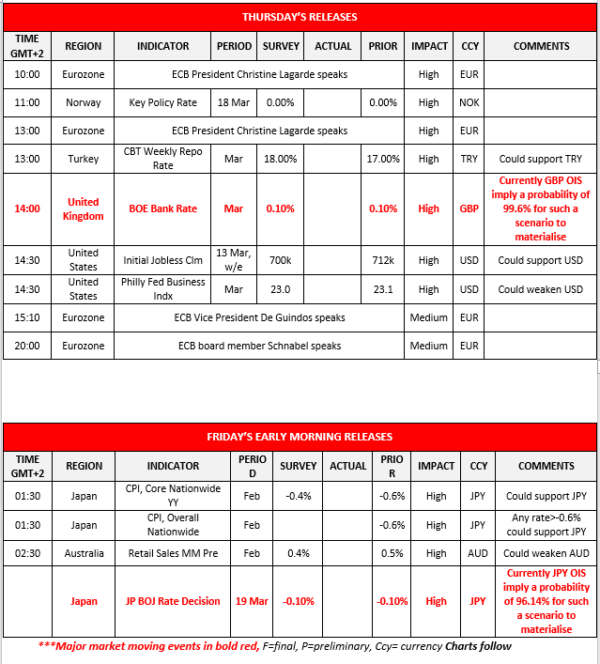