NZD/USD has posted strong gains on Wednesday. In the European session, NZD/USD is trading at 0.7196, down 88% on the day.

The New Zealand dollar continues to show significant volatility this week. NZD/USD fell by 0.76% on Tuesday but has recovered these losses in the Wednesday session. The catalyst for the NZ dollar’s strong rebound was a better-than-expected employment report for the first quarter. Employment Change posted a 0.6% gain for a second straight month, well above the forecast of 0.3%. As well, the unemployment rate dropped to 4.7%, down from 4.9% and beating the estimate of 4.9%.

The strong job data is all the more impressive, given that New Zealand endured a tourist season without any tourists being allowed into the country. Tourism provides 5.8% of GDP and there had been concerns that the lack of tourists during the New Zealand summer months (December to February) would curb economic growth and lead to higher unemployment.

The New Zealand economy is performing well, but low interest rates continue to fuel a red-hot housing market. The government has made some policy changes to curb property prices, which have surged over 20% in the past year. The government also instructed the RBNZ to consider housing prices when setting policy, which reflects the level of concern with housing prices.

On Wednesday, RBNZ Deputy Governor Geoff Bascand noted his concern that a decline in house prices could affect the financial system. Basand warned that the central bank was prepared to further tighten lending conditions for housing using LVR requirements or additional tools that we are assessing” as the RBNZ attempts to discourage speculators from further heating up the housing market.

New Zealand will release ANZ Business Confidence on Thursday (1:00 GMT), with the market hoping for a rebound from the weak April print of -8.4 points. A reading in positive territory could boost the New Zealand dollar. 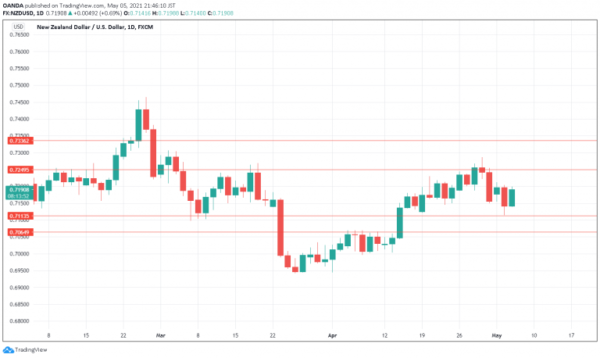