The first day of June will see the Reserve Bank of Australia (RBA) publishing its policy statement at 04:30 GMT. Expectations are for the central bank to upgrade its economic outlook but keep its policy unchanged. However, following the Reserve Bank of New Zealand’s (RBNZ) hawkish tone last week, questions are rising whether the RBA could follow suit, sending a wave of bullish optimism to the charmless Australian dollar. Such a task, however, could be difficult for the Bank, while GDP growth figures for Q1 and monthly retail sales for April due on Wednesday and Thursday at 01:30 GMT respectively, may not have enough power to shift market sentiment either.

Although the RBNZ held its policy stable last week and reiterated a preference to sustain the current level of stimulus until inflation and employment meet its objectives, the meeting minutes caught traders by surprise when the OCR target forecast contained a rate hike in the second half of 2022, a year earlier than investors expected. The RBNZ seems to be joining a handful of central banks which aim to withdraw their accommodative policy before the Fed does and that has boosted the New Zealand dollar last week, leaving the Australian dollar on the back foot.

On Tuesday, the RBA is expected to keep its monetary policy settings at current levels too, including its interest rate of 0.10%, its yield curve control on the three-year government bond, and the parameters of the Term Funding Facility. The Bank notified in the previous statement that “at July’s meeting the Board will consider whether to retain the April 2024 bond as the target bond for the 3-year yield target or to shift to the next maturity, the November 2024”. In the same month, it will also consider whether to extend its bond purchases under the government bond program which completes in September. Hence, no adjustments in asset purchases are expected to be announced before that date. Given that the RBA will not shape its rate projections in a chart during the meeting, it will also be difficult for policymakers to sound as hawkish as the RBNZ was.

RBA behind its objectives

Therefore, talks will likely gather around economic developments, but besides a feeling of optimism, there is nothing to celebrate on this front as regards the central bank’s targets.

Australia’s infection cases have been muted since the second wave eased in September 2020, allowing the government to remove some restrictions while applying stringent restrictions to international travelers. As a result, the economy erased some of its pandemic losses, returning to growth in the last two quarters of 2020. Despite that, headline inflation is still way below the RBA’s range target of 2-3% and the unemployment rate, although weaker at 5.6%, has yet to reach the central bank’s full employment criteria.

The minutes from the previous meeting also highlighted that wage growth should sustainably hold above 3.0% for inflation to successfully converge towards the range target. Disappointingly, though wages have barely picked up steam in the first quarter, ticking up to 1.5% from 1.4% previously. 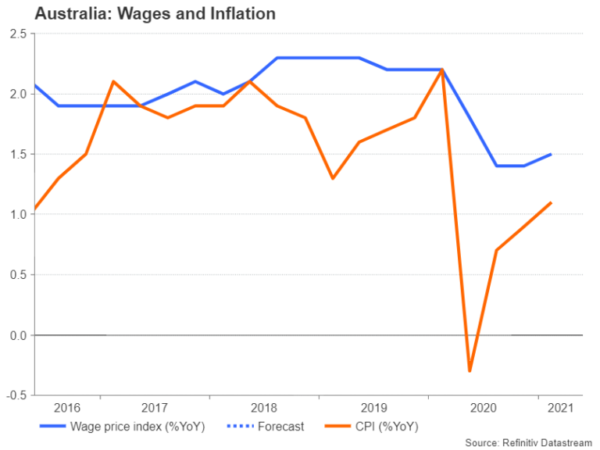 Of course, the recent capital expenditures readings showed another rosy quarter in the first three months of the year after the data spiked by 6.3% q/q, three times investors’ expectations. On Wednesday, the annual Q1 GDP growth figure could put some smiles to policymakers’ faces, extending the recovery to 0.2% from -1.1% previously. However, on a quarterly basis, the measure is forecast to slow its pace for the second consecutive time, easing from 3.1% to 1.1% as floods and snap short-term lockdowns have likely weighed on business and consumer activities. Monthly retail sales for April could also soften from 1.3% to 1.1%.

With the RBA lagging behind its objectives, vaccination rollouts progressing gradually, and Covid remaining a key threat as the winter season starts in the Southern Hemisphere and Victoria enters another seven-day lockdown, policymakers will wisely wait and see how health and economic conditions will evolve in the next few months before announcing any policy shifts. Perhaps, the booming housing market and the increasing mortgage intakes, which have jumped to two-year highs, could challenge the RBA’s stance. Yet, the stock of bond purchases as a share of GDP the Bank has acquired is the smallest when compared to other key central banks. Therefore, given the virus risks, the board may have some comfort to avoid any drastic changes and remain patient for now. 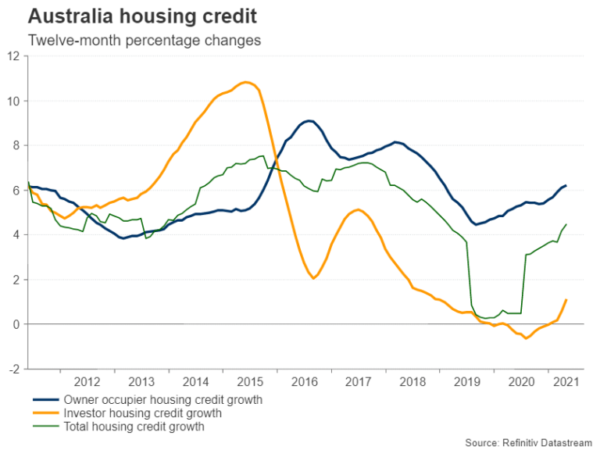 In FX markets, the Australian dollar has been in a quiet trading range since the peak in February and the RBA’s policy meeting could provide little incentive for a drastic shift, with the 200-day simple moving average (SMA) at 0.7525 and the 0.7900 resistance zone remaining key for pointing to the next directional action in the pair.

GDP and retail sales data may attract some interest, though if the Bank gives clear guidelines with respect to its future policy, it could reduce the odds for any important reactions in the wake of the data releases.