All eyes were on the Fed this week. Four times a year the Federal Open Market Committee (FOMC) not only refreshes its policy statement but also gives updates on members’ projections for economic growth, inflation and the federal funds rate. June is one of those meetings. While the FOMC kept policy unchanged, most Fed officials now expect to start raising the federal funds rate in 2023, a year earlier than previously expected. Economic growth and inflation forecasts for this year were also revised upwards.

With economic growth getting closer to potential and the labor market strengthening (despite the slight increase in weekly unemployment claims reported this week), the Fed has become more confident in the economic recovery (Chart 1). Success on the vaccine front has a lot to do with it. As the Fed’s policy statement noted, “progress on vaccinations has reduced the spread of COVID-19 in the United States. Amid this progress and strong policy support, indicators of economic activity and employment have strengthened.” While Chair Powell was cautious to add that the economy is not fully out the woods and the fast spreading delta variant could still lead to setbacks, most members were confident enough to raise their forecasts. The median projection for real GDP growth in 2021 was upgraded to 7.0% (from 6.5% in March). 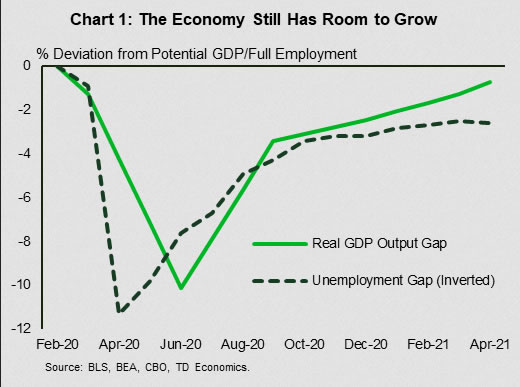 With respect to the labor market, Fed chair Powell struck an optimistic tone. Powell said that “there’s every reason to think that we’ll be in a labor market with very attractive numbers, with low unemployment, high participation and rising wages across the spectrum.” In keeping with the chair’s message, the median unemployment rate forecast was nudged down to 3.8% in 2022 (from 3.9% previously).

On the inflation front, the Fed maintains that the recent rise in inflation is “largely reflecting transitory factors” and reiterated that it had the tools to tackle it if needed (Chart 2). While Powell acknowledged that there was a risk that inflation could be higher than expected, the median estimate for core inflation largely kept with the transitory theme. The forecast for 2021 was raised to 3.0% in 2021 but drops back down to 2.1% in 2022 (still up from 2.0% previously). 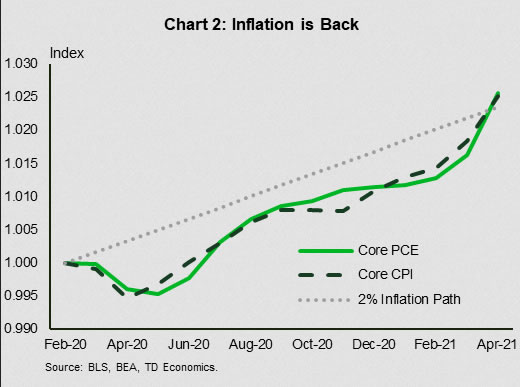 Meanwhile, the median projection for the fed funds rate remained at the lower bound through 2022 but increased to 0.6% in 2023. Last March, most Fed officials predicted that current rates would be maintained at the zero lower bound until 2024. The new projections now see two rate hikes in 2023.

What is more, while 13 FOMC members think the first hike could happen in 2023, seven members see it happening in 2022. This could well be the start of a trend. With the economic recovery set to continue at a healthy pace, more Fed members are likely to continue to signal an earlier start to the rate hiking cycle. As Chair Powell noted, this is “the beginning of the transition phase.” It could well mark the beginning of the end of pandemic-era ultra-accommodative monetary policy and the shift to a more hawkish Fed.

Canada – Bank of Canada Not Spooked by Inflation

Inflation is on everyone’s mind these days. With prices rising at the fastest pace in a decade, consumers, producers and central bankers have taken notice. Headline inflation picked up to 3.6% year-over-year in May, up from 3.4% in April (Chart 1). Similar to the previous month, rapidly rising gasoline prices (which are up 43.3% year-over-year) remained a big part of the story. Excluding energy, inflation would have been more benign at just 2.2%, but still up from the 1.6% pace seen last month, suggesting that inflationary pressures are broadening. 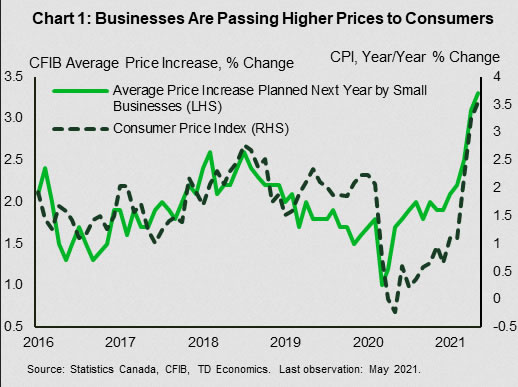 Prices are recovering in many categories where consumer spending was depressed by pandemic-related restrictions. However, the hottest areas of price growth are in places where demand was boosted by pandemic and supply has been slow to respond – furniture, housing and passenger vehicle prices – with the latter exacerbated by global shortage of semi-conductor chips, which is weighing on auto production. Homeowner’s replacement costs, which is tied to the cost of new houses, is up 11.3% year-on-year, reflecting strong demand for single-family homes as well as significant increases in the cost of inputs, such as lumber.

Home prices – both new and existing – have been on an absolute tear during the pandemic, driven by explosive demand and limited supply. Sales of existing homes have fallen for the past two months, but prices – as measured by the CREA home price index – continued to rise in May. Single family home prices advanced 1.2% month-on-month (and are up nearly 30% from a year ago). Growth in apartment prices is also how accelerating, up 1.9% m/m, and up 10.6% from a year ago – the strongest advance since 2018 (Chart 2). 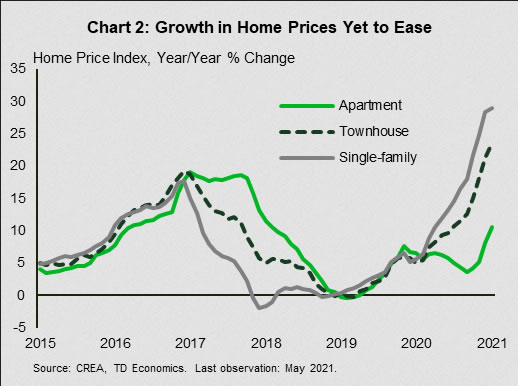 Notably, the recent acceleration in inflation in Canada has came even as pandemic restrictions were still holding back activity in high-contact industries in April and May. With the re-opening process just starting in many provinces in June, we are likely still in the early days of the cyclical economic rebound. Recovering demand and the lingering supply chain bottlenecks will likely keep prices elevated in the months ahead. As our updated economic forecast shows, headline inflation is expected to remain above 3% throughout this year, peaking in the third quarter before subsiding to mid-2% rate toward the middle of next year.

Inflation has come back faster than expected by private-sector forecasters and the central bank in both Canada and the United States. As of yet, neither central bank appears to be overly concerned, attributing much of the acceleration in prices to transitory factors that will dissipate as the economy normalizes. In his speech this week, Bank of Canada Governor Tiff Macklem said that the Bank expects to see inflation at the top of its 1%-3% inflation control target range through the summer.

We do not expect to see the Bank of Canada change its tune on this front immediately, but as we saw from the Federal Reserve this week, upgrades to economic outlook will reduce the need for extremely accommodative monetary policy. As long as the economic recovery continues to show resilience, we expect to see communication transition to reducing asset purchases and eventually raising the overnight rate.